Children completed an eye-tracking task on a Tobii T60-XL. Each trial simultaneously showed one familiar image (e.g., cat) and one novel image (e.g., wombat). The real-word (RW) condition presented a familiar label (Find the cat), and the novel-word (NW) condition presented a novel label (See the vafe?). Trials were eliminated if children were not reported to understand the familiar word. Looks at each time point between 200ms and 1300ms after noun onset were categorized as looks to target or distracter.

A binomial logistic mixed-effects model was constructed with time and condition (RW vs. NW) as the independent variables and looks (target vs. distracter) as the dependent variable. The model included participant*condition random effects for intercept and slope.

In the NW condition, there was a significant non-zero slope; although children showed a strong baseline preference to look at the familiar image, they significantly increased their looking to the novel image after hearing the novel word. Even 1300ms after noun onset, however, children spent approximately the same amount of time looking at the familiar and novel image in the NW condition.

Young children with ASD increased their looks to a novel image after hearing a novel word, suggesting that they may use mutual exclusivity to determine the referents of new words. Nevertheless, they continued to look at the familiar object about half of the time. This demonstrates the impact of baseline visual preferences on attention allocation in a language-based task. Additional research is needed to investigate the relationships among visual attention, language processing, and language learning in children with ASD. 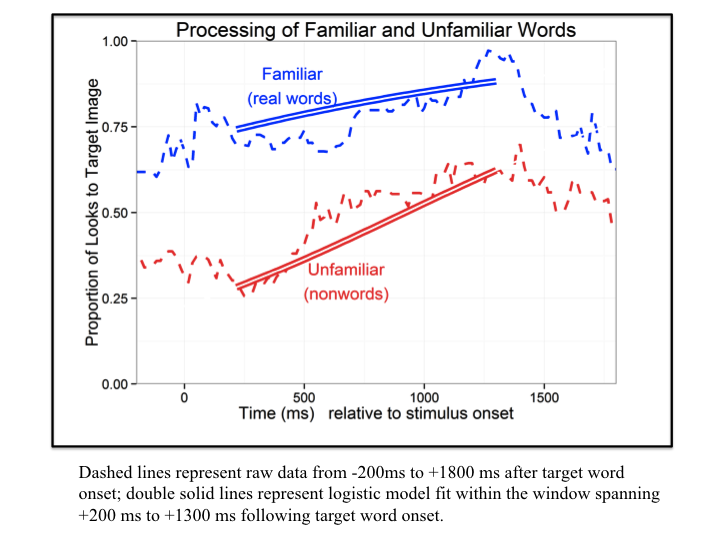