18679
Study of Communication Deficits in the Siblings of Children with Autism Spectrum Disorders Using the Children's Communication Checklist-2: A Pilot Initiative from India

Imperial Ballroom (Grand America Hotel)
S. S. Meera1, S. C. Girimaji1, S. P. Seshadri1, M. Philip1 and N. Shivashankar2, (1)NIMHANS, Bangalore, India, (2)Dept. of Speech Pathology and Audiology, NIMHANS, Bangalore, India
Background: Researchers have reported an increased risk for Siblings of children with Autism Spectrum Disorders (S-ASD) to have subtle characteristics of Autism Spectrum Disorder (ASD), known as the Broad Autism Phenotype (BAP). Though Pragmatic Language Deficit (PLD) is a hall mark feature of ASD, both PLD and structural language deficits have been reported in S-ASD. However studies are few and have not been convergent. Use of the Children’s Communication Checklist (CCC-2 Bishop, 2003) in the S-ASD has been reported in literature (Bishop, 2006; Taylor, 2013) to identify heritable ASD phenotype. The current pilot study attempts to explore communication deficits among S-ASD who belong to a different cultural background, thereby contributing to the existing literature. Such a study could allow one to gain further insight into the understanding of cross cultural phenotypic variations, if any.

Objectives: To compare the CCC-2 scores in siblings of children with ASD (S-ASD), Down’s Syndrome (S-DS) and siblings of typically developing (S-TD) children.

Methods: The study comprised a total of 63 participants divided into 3 groups; S-ASD (n=17), S-DS (n= 18) S-TD (n=28).  They were assessed on the CCC-2, a questionnaire that was filled by parents. Group differences were assessed on the two composite scores, the General Communication Composite (GCC) and the Social Interaction Deviance composite (SIDC) and also on a CCC-2 total score (total of all 10 subscales). Further each subscale was examined. Nonparametric tests with Bonferroni corrections were used to examine group differences.

Results: Kruskal-Wallis test showed significant differences between groups on the GCC (p=<0.001), SIDC (p=<0.05), CCC-2 total (p=<0.001) and 7 of the 10 subscales (p=<0.05). While there were no differences on the speech, syntax and semantics subscales- all three assessing structural language, there were differences on the sub-scales that assess i) pragmatic language (inappropriate initiation, stereotyped language, use of context, non-verbal communication) ii) behavioural domains relevant to ASD (social relations, interests) and iii) only on one subscale that assesses structural language (coherence). Thus the present study demonstrated that S-ASD have significant PLD over structural language deficits as measured by the CCC-2. In contrast to the previously reported studies (Bishop, 2003; Taylor 2013), the present study has demonstrated poor SIDC scores, an index sensitive to pragmatic impairment, in S-ASD. Mann-Whitney test indicated no group differences between the S-DS and S-TD indicating that differences in S-ASD cannot be attributed to presence of a sibling with disability alone.

Conclusions: This study lends support to the presence of mild forms of PLD in S-ASD and suggestive of CCC-2 being a sensitive tool to pick up the same. It is also important to identify such PLDs in S-ASD early and initiate appropriate interventions. The present study warrants further exploration on a larger group supported by direct observations. 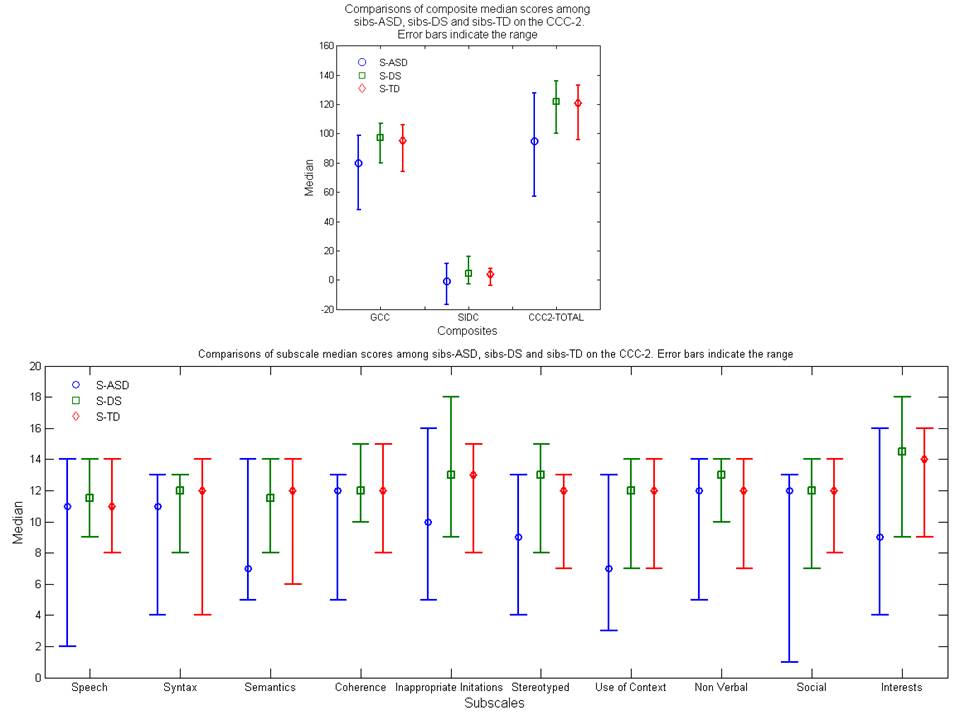