Objectives:  We studied Utah high-risk ASD families where specific variants reported by the ASC in chromatin remodeling genes occurred. We are characterizing additional likely damaging variants in this pathway not reported by the ASC but occurring in our family sample. Because our families have large sibships with multiple affected and unaffected individuals, we have the opportunity to observe penetrance, specific associations with clinical phenotypes, and differences in environmental exposures.

Methods: Our analysis used 518 individuals from Utah families distinct from the ASC sample. These included 186 with ASD and 332 unaffected relatives genotyped with Illumina HumanExome chip, and 61 with ASD and 27 unaffected relatives with whole exome sequence data (Agilent SureSelect and Illumina GAIIx).  We first searched for occurrence of specific likely-damaging chromatin pathway gene variants reported in the ASC study in our existing molecular data.  We characterized additional variants in our families in all genes in this pathway implicated by the ASC using available sequence annotation (e.g., PolyPhen, Annovar), and validated variants found in exome sequencing using Sanger sequencing.  For each variant, we report demographics and phenotype data (ASD severity, IQ, behavioral questionnaires, evidence of medical and/or psychiatric co-morbidities).  Finally, we report differences in the occurrence of previously validated environmental risks (pregnancy risk factors) in affected individuals with variants vs. unaffected individuals with variants.

Results: Eight Utah families were found to segregate six rare, non-synonymous, likely damaging variants appearing in the ASC in five chromatin pathway genes.  Twelve other chromatin pathway genes were not found to harbor variants seen in the ASC study; however, we are determining the presence of other novel, potentially damaging variants in these genes.  Table 1 shows gene variants studied to date which include only those that appeared in the recent ASC study.  Each of these variants occurs in unaffected relatives, indicating reduced penetrance.  The variant in ASH1Lonly occurred in unaffected relatives, suggesting that it may have been a false positive in the ASC study. Across all variants studied to date, the ADI (affected relatives) and Social Responsiveness Scale (unaffected relatives) scores with and without each variant do not demonstrate a clear pattern of elevation in any subgroup.

Conclusions: Variants in highly significant risk genes from the ASC study studied to date show reduced penetrance in our family data through occurrence in unaffected relatives.  Associations with clinical and subclinical variables are complex and differ by gene and gene variant. We are in the process of studying additional available environmental .exposure data (additional birth risk factors, infections in early life, air quality data) to determine if exposure differences could partially account for presence/absence of ASD in siblings with the same variant. 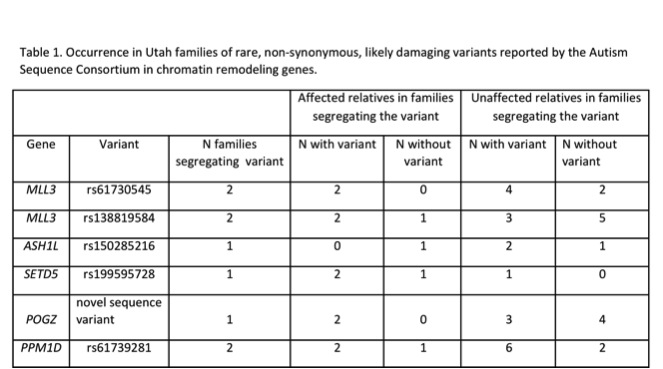