Imperial Ballroom (Grand America Hotel)
J. Musolff1, D. Portenier1, J. J. Diehl2, M. Villano3 and C. R. Crowell3, (1)Barber National Institute, Erie, PA, (2)Psychology, University of Notre Dame, Notre Dame, IN, (3)University of Notre Dame, Notre Dame, IN
Background:  Research has shown that an effective teaching method when working with children with an autism spectrum disorder (ASD) is discrete trial instruction (DTI).  DTI is a process of simplifying a skill into smaller parts to enhance the child’s learning.  Research has also suggested that children with ASD 1) excel in treatment programs that contain visual stimuli, 2) are more intrinsically motivated when the treatment interventions involve technical or robotic components, and 3) are more response to feedback when given by a form of technology.   This study proposes the use of a Nao, a 23-inch tall humanoid robot, during discrete trial sessions to increase communication skills in children with ASD.

Objectives: To assess the effectiveness of an interactive robot during discrete trial instruction to increase communication skills by a child with ASD.

Methods: The Verbal Behavior Milestones Assessment and Placement Program (VB-MAPP) was implemented to determine current level of functioning and specific skill deficits in the areas of manding, tact, listener responding, and intraverbal skills.  Goals were developed based on the results. Baseline data was collected across four consecutive days. Once a stable baseline was established, a total of 16 sessions were implemented. Discrete trial instruction was implemented by the therapist during all sessions. Prior to intervention, a probe, consisting of ten trials, was given to assess the child’s skill level on the target skill. No prompting or corrective feedback was provided during probe trials, nor was the robot present during this time. The percentage of accuracy was graphed at the end of each probe session.  During intervention, prompting, corrective feedback, and reinforcement were provided by either the therapist and/or robot. Eight of the 16 sessions included the therapist, child, and the Nao Robot; the other eight of sessions included only the therapist with the child.

Results: Sessions including the Nao robot resulted with a faster rate of acquisition of targeted skills compared to sessions with only the therapist and child. Generalization of these skills was also observed across environments and instructors. 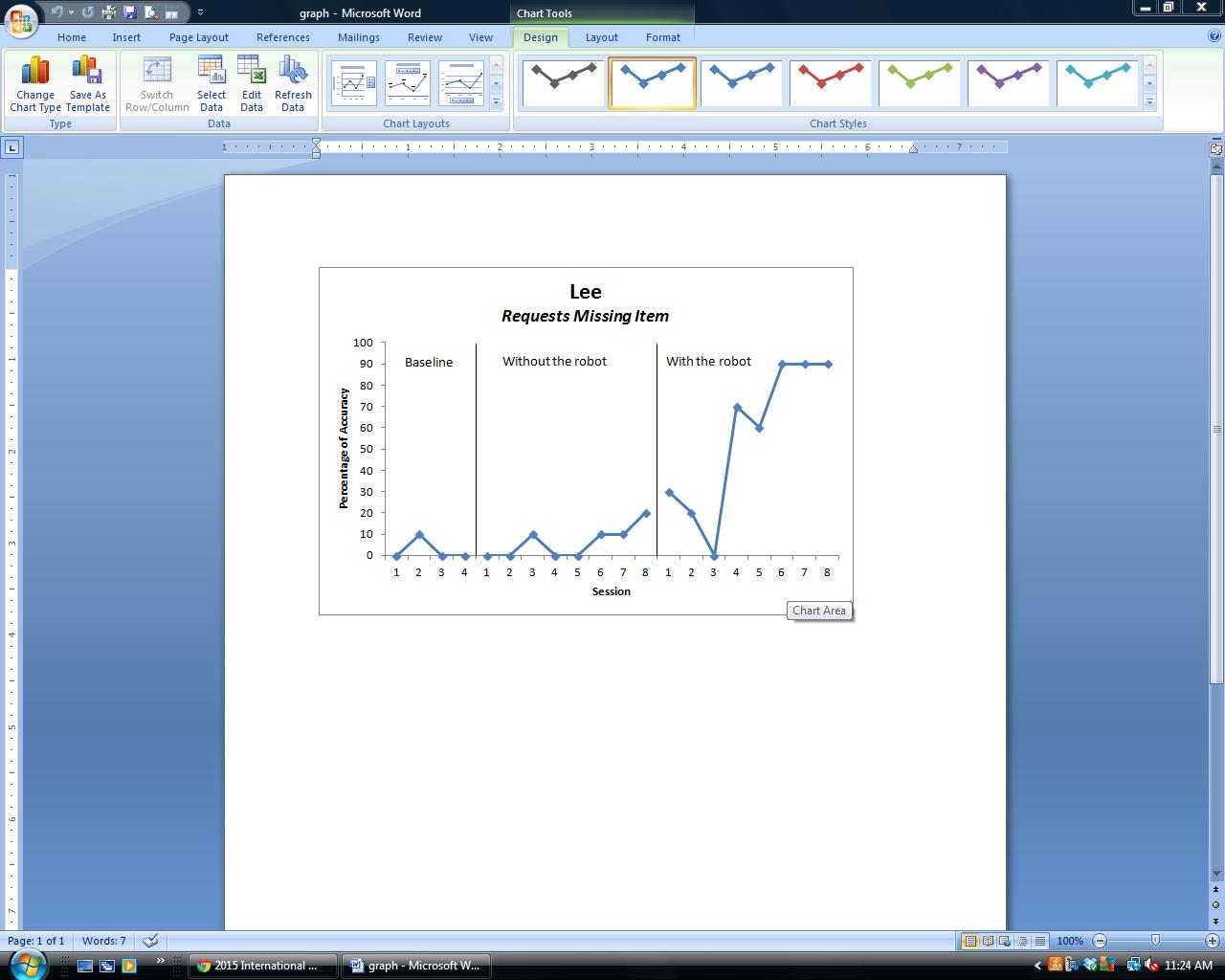