19173
Effective Way to Improve Competence in Answering Questions Among Children with ASD: Repeat Your Question or Gesture?

Children with Autism Spectrum Disorders (ASD) have problems in responding to Wh-questions (e.g., Curico & Paccia, 1987). Fail to answer questions may exclude children from taking part in social interaction (Paul, 1985). A few studies have examined ways (e.g., visual cues, additional probes, repeated questioning) to improve question-answering skills among children with ASD in an experimental setting (e.g., Krantz et al., 1981; Jahr, 2001; Scean, et al., 1989). However, very little is known about the way to promote question-answering skills among children with ASD in naturalistic contexts. In a naturalistic setting, caregivers spontaneously move their hands (i.e., gesture) when interacting with their children (e.g., pointing to a cookie while asking, “What is it?”) (McNeill, 1992). So and Lim (2012) reported that typically-developing children were more likely to respond to caregivers’ questions if those gestures were accompanied by gestures, possibly because gestures can help children to identify referents in the questions. The question of interest is whether producing gestures while asking questions would promote question-answering skills among children with ASD.

Objectives:  The present study examined whether asking questions with gestures or simply repeated questions would increase response rate to wh-questions among children with ASD.

The participants were 8 Chinese-speaking caregivers (aged 35 or above) and their six- to eleven-year-old children (all males) with low-functioning ASD. Caregivers were invited to engage in a conversation with their children for 15 minutes. A toy set (farm blocks) was provided to facilitate the interaction.

Speech produced by caregivers was transcribed and their gestures were coded by native Chinese speakers. We focused on wh-questions asked by caregivers. Each question was classified to two categories based on its information status: novel and repeated. Questions were considered to be novel if they were not asked in the preceding 20 utterances and to be repeated if they were asked in the preceding 20 utterances. We calculated the proportion of appropriate answers provided by children immediately to those questions (on the basis of whether speech contents were appropriate in a particular context).

On average, caregivers asked wh-questions 43.25% of the time (SD=.17). Among all wh-questions, 36.18% of them (SD=.15) were accompanied by gestures (mainly pointing gestures) and 76.18% (SD=.13) were novel questions. Figure 1 shows the mean proportion of appropriate response to the questions. Children with ASD were more likely to respond appropriately to repeated questions than to novel questions, F(1,7)=11.02, p<.013. However, the proportion of appropriate response to questions with gestures was comparable to that to questions without gestures, F(1,7)=.35, p<.58. 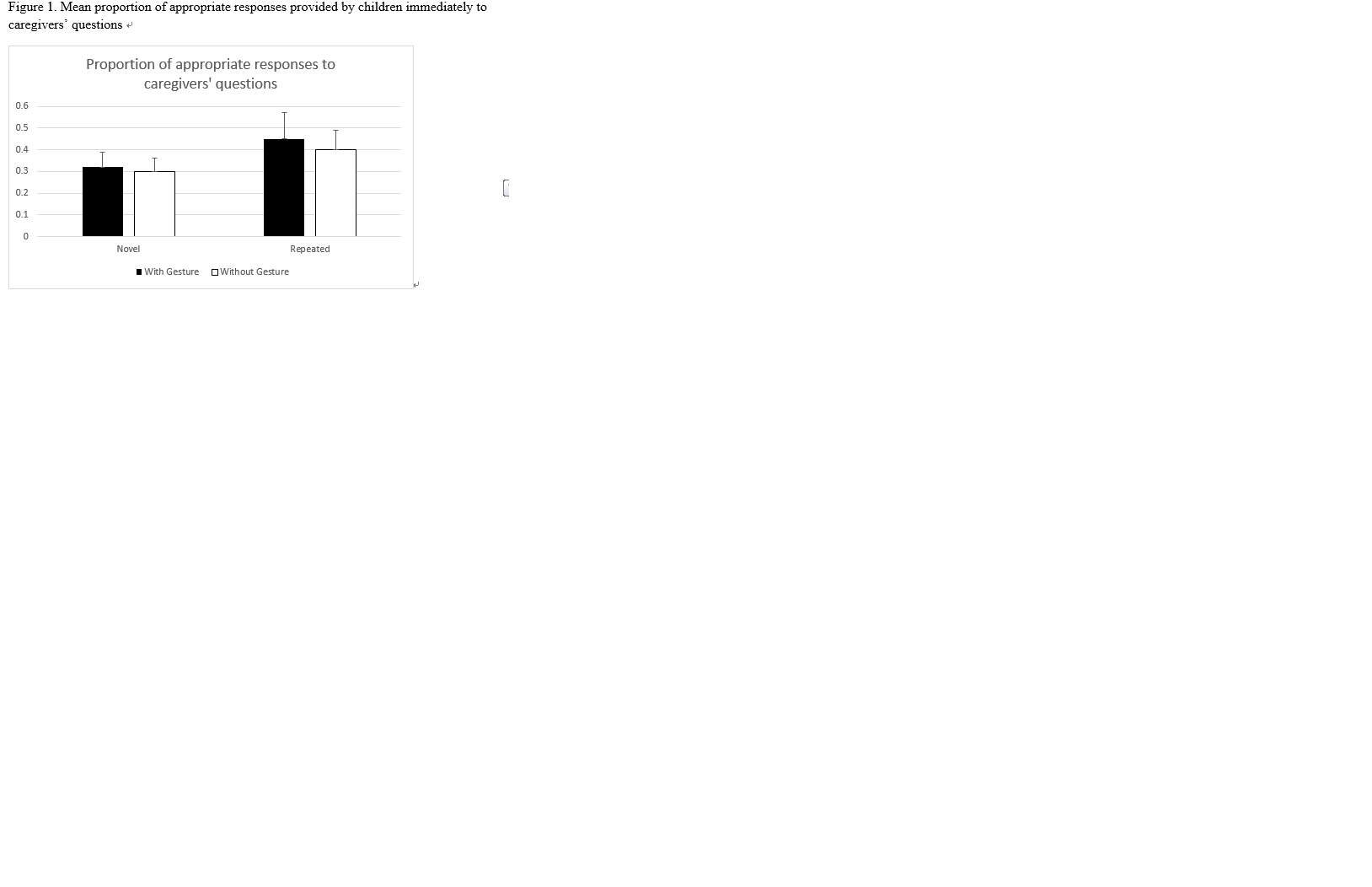