Methods:  The sample was comprised of 168 families of self-reported Hispanic ethnicity recruited from the University of Miami, who fell into one of three groups: i) families with a child affected by ASD, ii) families in whom a child had a non-ASD psychiatric diagnosis, psychiatric controls (PC), or iii) families of typical controls (TC).  Each family included one index child that defined family category and at least one sibling. All index children and siblings had at least one biological parent of self-report Hispanic ethnicity (s-rHE):  for each group a minimum of 75% of fathers and 75% of mothers were of s-rHE. Quantitative autistic trait scores of index children (n=164) and siblings (n=153), were assessed by parent-reports using the Social Responsiveness Scale-2 (SRS-2, Constantino & Gruber, 2012).  Fifty-nine index children and 53 siblings were additionally rated by teacher-reports, and 142 mothers and 157 fathers (138 pairs) were rated by spousal-report using the SRS-2.  In this study, we implemented either English or Spanish versions of the SRS-2, depending on the primary language spoken by the rater.  Index cases of ASD were confirmed using the Autism Diagnostic Observation Schedule and either the Autism Diagnostic Interview – Revised (ADI-R) or the Social Communication Questionnaire (to ascertain developmental history).

Results:  In keeping with prior studies in non-Hispanic samples, QAT scores of children with ASD diagnosis were three standard deviations higher than those of typical controls; unaffected sibs and children in families affected by other psychiatric conditions exhibited intermediate levels of QAT (Table 1).  SRS-2 intra class correlation coefficients between biological mothers and fathers by spousal-reports were uniformly elevated: ASD group ICC=.52, df=61, p<.0001; PC group ICC=.66, df=15, p<.002; TC group ICC=.59, df=59, p<.0001. A significantly higher proportion of concordantly elevated SRS scores for spousal pairs (i.e. both parents in upper quartile of the distribution, defined in Table 2) were observed in the ASD group than in the typical control group (16.1% vs. 3.3%, Fisher’s exact, p=.03).

Conclusions: This study provides cross-cultural confirmation of the aggregation of QAT in the family members (parents and siblings) of Hispanic children affected by ASD. There was evidence of pronounced preferential mating for QAT, and spousal concordance for sub clinical elevation in QAT was significantly associated with clinical affectation in offspring. Findings support the role of additive genetic influences in the intergenerational transmission of ASD susceptibility in Hispanic families, suggest the possible role of mate selection in offspring ASD risk, and support the ability of the SRS-2 to trace sub clinical affectation as a proxy for transmission of inherited liability in this population. 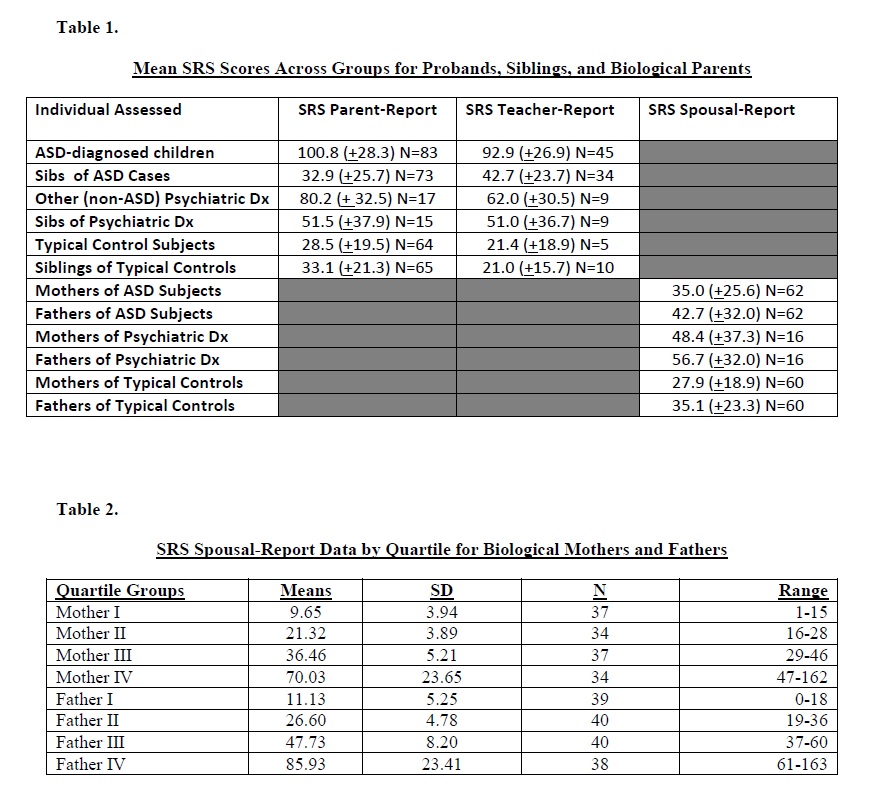