Assessment of the cognitive operations responsible for language and thought are typically quantified using overt behaviors such as response time or verbal reports. However, such explicit measures assume an understanding of task goals and an ability to execute the required response. In certain populations, such as low-functioning, nonverbal individuals with autism, such measures might be difficult or impossible to obtain. In such cases, it would be helpful to have implicit measures of cognitive abilities, ones that do not require explicit understanding and cooperation. We have previously shown that eye movement monitoring (EM), pupillary dilation (PD), and event-related potentials (ERPs) can estimate receptive vocabulary knowledge in normal adults (Ledoux et al., accepted pending revision). However, the degree to which these implicit measures can serve as reliable indices of vocabulary knowledge in low-functioning individuals with autism (LFAs) is unknown.

The aim of the current study is to demonstrate whether three implicit measures (EM, PD, and ERPs) can be used to assess receptive vocabulary knowledge, on an individual basis, in LFAs.

Participants were five LFAs. Stimuli were high-frequency “known” words (e.g. bus, telephone) and low-frequency “unknown” words (e.g. cherimoya, agouti). Participants completed two tasks on two separate sessions. In the forced-choice task (during which EM and PD data were recorded) four pictures were presented together, followed by an auditory word that matched one of the pictures. In the picture-word congruity task (during which ERP data were recorded) participants viewed a picture then heard either a matching or mismatching auditory word. Importantly, behavioral responses were not required.

In the EM data (Figure 1a), known words showed longer average fixation durations and a greater proportion of fixation and dwell time on the target picture relative to unknown words, indicating that participants spent a greater amount of time looking at the target picture when the word was known. Known trials had fewer fixations compared to unknown trials, suggesting that participants’ eyes moved more directly to the target picture in response to known words. These findings replicate those of normal adults (Ledoux et al., accepted pending revision). In the PD data (Figure 1b), the average change in PD was greater for unknown words compared to known words, suggesting greater recruitment of resources for unknown words. In the ERP data, known trials elicited an N400 effect (reduced N400 amplitude for congruent picture-word pairs compared to incongruent pairs) over centro-parietal scalp (Figure 1c).  Although there were also congruency differences in the unknown words (Figure 1d), these effects were sustained over the entire trial and did not correspond to an N400 effect.

Overall, LFAs showed similar patterns of EM, PD, and ERPs responses to known and unknown vocabulary as did normal adults, although there was significant individual variation.  Thus despite the inevitable heterogeneity in this population, these implicit measures can be used to assess receptive vocabulary knowledge in the absence of behavioral responses. These techniques hold great potential for assessment of linguistic and other cognitive capabilities in low-functioning populations. 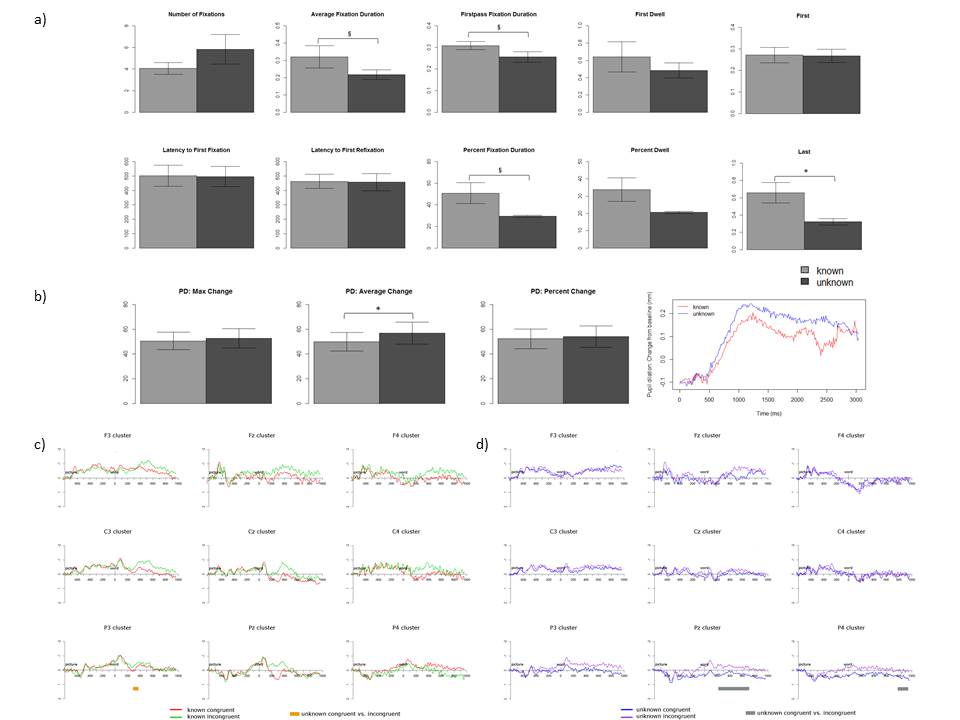