Objectives:  In this study, we examined the distribution of quantitative autistic traits in NF1, their relationships with sex and ADHD symptomatology, and explored evidence for mutational specificity by examining within-family trait correlations for QAT.

Methods: 160 of 320 invited individuals from 253 families (50.0%) agreed to participate. Participants completed and mailed in age-appropriate versions of the Social Responsiveness Scale-2 (SRS-2) and a Conners ADHD Rating Scale. Of the enrolled individuals, the SRS-2 was completed for 103 individuals with a range of age from 30 months to 74 years from 78 families. ADHD rating scales were completed on 97 subjects. A within-family intra class correlation coefficient for SRS-2 scores was computed for pairings of co-affected first degree relatives in 18 families.

Results:  These data replicated a pronounced pathological shift in the distribution of SRS2 scores (see Figure 1 below) in comparison to the general population distribution.  In contrast to what is observed in familial autistic syndromes, no statistically-significant sex effects on scores were observed, and SRS2 scores for male and female NF1 subjects appeared continuously distributed. An SRS2 intra class correlation of 0.767 was observed for pairings of first degree relatives with NF1, substantially higher than correlations on the order of 0.30 typically observed for first degree relatives in clinical samples (Lyall et al., 2014; Constantino et al., 2006) and in the general population (Constantino and Todd, 2003)--a scatter plot is provided in Figure 2. The correlation between SRS2 and ADHD index scores was moderate, as previously reported in population-based samples.

Conclusions:  Exploration of the relationship between specific NF1 genotypes and autistic social impairment appears strongly warranted and may offer insights into mechanisms by which mutational variation in this unique autism candidate gene influences autistic trait severity.  The magnitude of the within-family correlation strongly suggests that it is specific to NF1 genotype and not attributable to family genetic background, since the latter typically manifests in substantially lower trait correlations between first degree relatives. 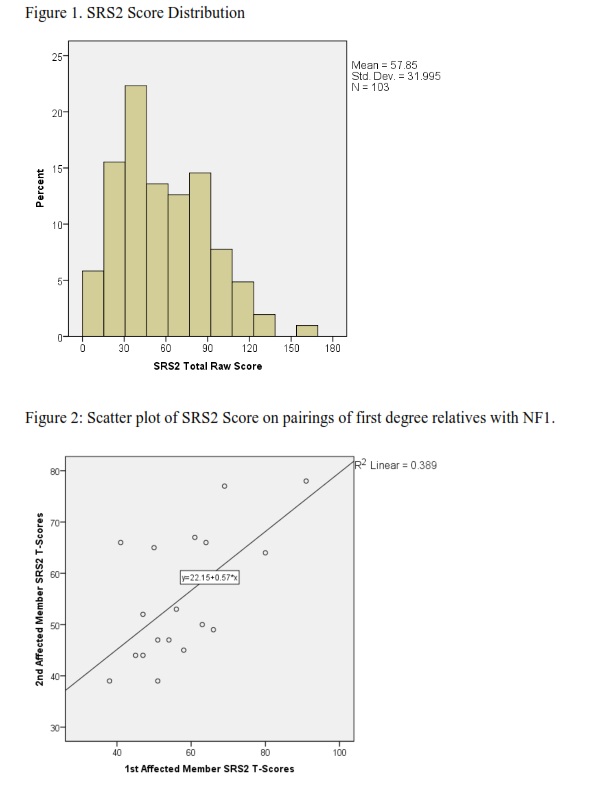