19585
Language Disfluency and Cognitive Load in Children with ASD

Objectives: A virtual reality public speaking paradigm was used to compare rates of disfluency in children with HFA, children with ADHD, and TD children. In addition, the attention demands were varied to examine the effects of differences in cognitive load on language disfluency.

Methods: Eighty children, divided into younger 8-11 and older 12-16 age groups were assessed.  The sample included four groups of children: 17 HFA with low ADHD symptoms scored on the Conners 3 parent report, 21 with high ADHD symptoms who were called ASD/ADHD comorbid (T-scores > 70), 21 children with ADHD symptoms but no symptoms of ASD, and 21 children with typical development. ASD diagnosis was confirmed with the ADOS. Groups were matched in their Full-scale IQ level with a minimum IQ of 75 necessary to participate in this study. Children viewed a virtual classroom through a head-mounted display. They were asked to answer different questions about their interests and daily activities while viewing 9 targets seated around a large table in a VR classroom. There were three 3-minute conditions: In the Non-Social Attention condition children talked to 9 “lollipop” shaped forms positioned to their left and right at the table; in the Social Attention Condition children talked to avatar “peers”, and in the High-Demand Social Attention Condition they talked to avatars that faded if children did not fixate them every 15 seconds.  . Their speech was audiotaped, transcribed, and then analyzed for seven measures of disfluencies (‘um’, ‘uh’, false starts, repetitions, revision, non-completion of a word, and sighs).

Conclusions: The results indicated that as the attention demands of the public speaking task increased the frequency of language disfluency increased. Children in ASD/ADHD comorbid group were especially susceptible to this type of language and communication difficulty as task demands increased. This pattern of results suggests that within ASD the presence of ADHD symptoms may be related to greater risk for social-communication disturbance as the attention demands of social interactions increase. 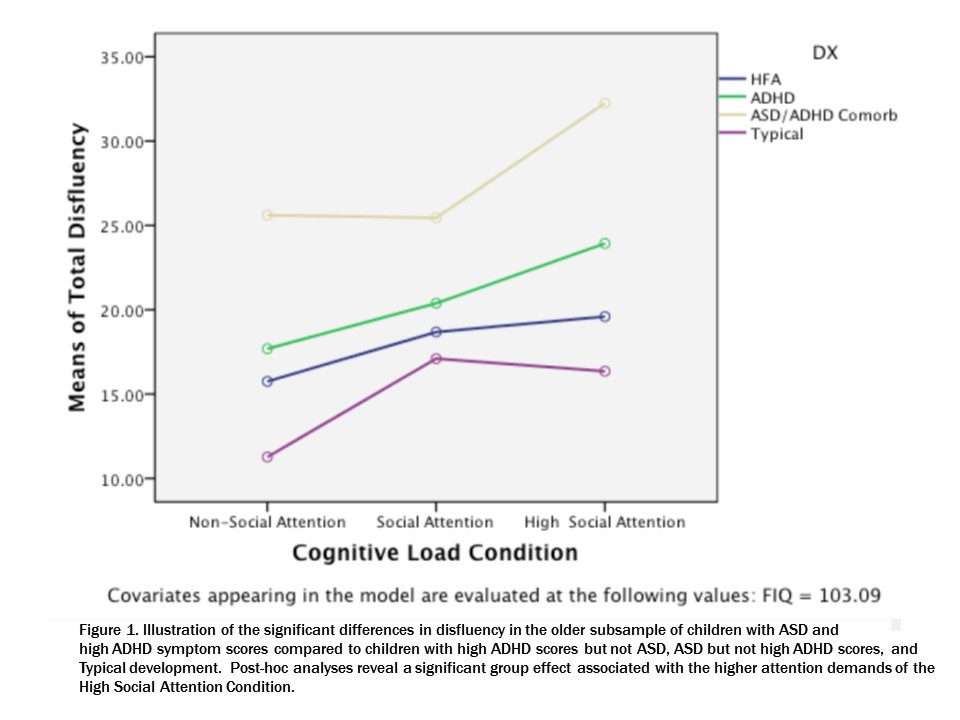