Researchers have proposed that a subgroup of children with ASD have a specific language impairment (SLI); that is, their nonverbal functioning is unimpaired but their structural language is below the normal range.1,2 It is unclear how commonly this phenotype is observed in ASD.  Moreover, it is unclear whether indications of SLI can be observed in children younger than 4 years of age. Understanding language profiles of young children with ASD provides important information about stability and variability in language symptomatology and furthers our understanding of emergent language phenotypes.

To examine the prevalence of SLI in a large group of 5-year-olds with ASD, and to investigate behavioral precursors when these children were three years of age.

The performance of these four subgroups two years earlier (at 3 years of age) was then examined for evidence of behavioral precursors.  One-way ANOVAs revealed significant effects of group for the ADOS, Mullen VR, Mullen RL, and Mullen EL (Fs>35.0, ps<.001).  Post-hoc Scheffe tests indicated that the Possible SLI group differed significantly from the V/NV>80 and V/NVnotdiscrepant  groups on the Mullen EL (p<.01), and from the V/NV>80 group on the Mullen VR (p<.001).  However, the Possible SLI group did not differ from the V/NV<70 group on any score at 3 years of age. None of the groups differed on Vineland Socialization score at 3 years of age.

At five years of age, approximately 10% of the sample met criteria for SLI if language scores on the available standardized tests were considered.  Possible SLI children at age 5 did not differ from V/NVnotdiscrepant children at the same age on their nonverbal or ADOS scores, supporting the argument for an impairment that is language-based.  However, two years earlier, Possible SLI children did not differ from V/NV<70 children on Mullen, Vineland, or ADOS scores.  It remains difficult to predict which children, at diagnosis, will manifest an SLI.  Moreover, language impairment in ASD may encompass both lexical and grammatical functioning. 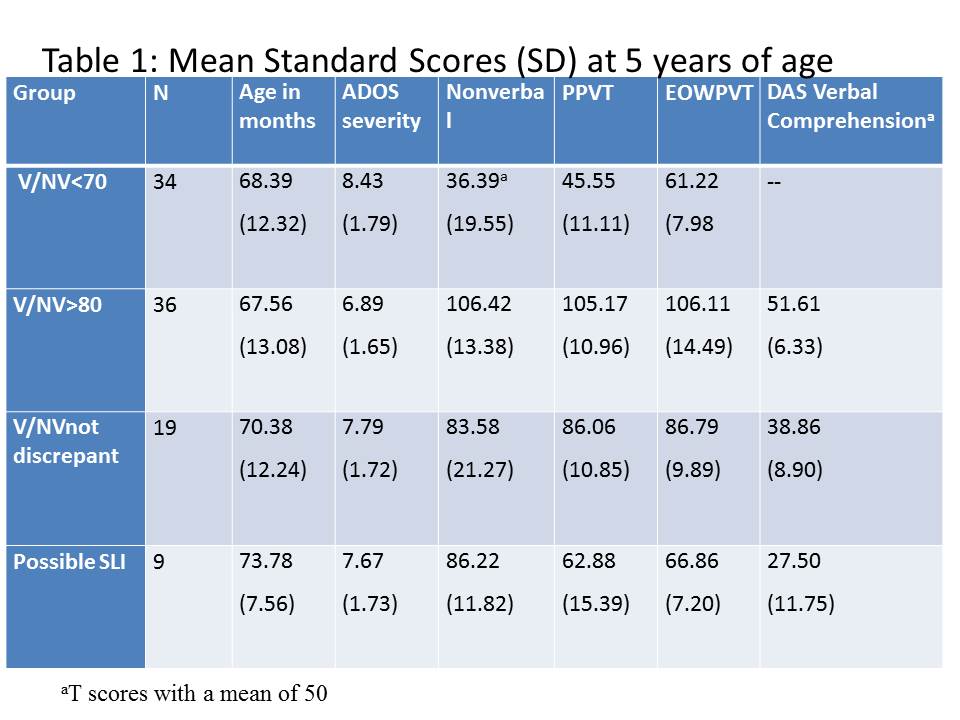