Imperial Ballroom (Grand America Hotel)
S. S. Manwaring1, L. Swineford2, P. Albert2 and A. Thurm2, (1)Communication Sciences and Disorders, University of Utah, Salt Lake City, UT, (2)Pediatrics & Developmental Neuroscience, National Institute of Mental Health, Bethesda, MD
Background: Deficits in nonverbal communication, including use of gestures, are one of the required criteria used to diagnosis autism spectrum disorder (ASD). However, little is known about gesture use and its relation to language and ASD symptoms in children at risk for ASD. The comparison of gesture measurement approaches may be particularly useful in examining these relationships.

Objectives: The purpose of this study was to examine the relationship among gesture use, language, and risk for ASD.

Methods: Thirty-six toddlers enrolled in a study focused on language delay as a risk-factor for ASD. Children were categorized into two groups (n=18 at-risk; n=18 TD) based on an evaluation at 18 months of age. Language delay was defined as ≥2 SDs below the mean in receptive and expressive language on the Mullen Scales of Early Learning (MSEL; Mullen, 1995). All children were administered the Communication and Symbolic Behavior Scales Developmental Profile Behavior Sample (CSBS BS; Wetherby & Prizant, 2002), a face-to-face evaluation of the child interacting with a parent and clinician. Gestures were scored from videotaped CSBS BS sessions using standard scoring (BS SS), which included a weighted raw score based on the presence/absence of 8 gestures along with the use of distal gestures (out of 6 possible). A newly created detailed gesture analysis scheme was also used to code gestures, by creating a total gesture score based on all deictic (e.g. point, show, reach, give) and representational (e.g. conventional gestures such as waving, clapping; signs) gestures coded using ELAN, a computer-based coding software. Gesture use was examined in relation to ASD symptoms and expressive and receptive language measured concurrently on the ADOS and MSEL.

Results: Children in the at-risk group used significantly fewer gestures compared to children with TD (Table 1). Almost all correlations between gesture use and language were larger when the detailed gesture analysis was used, compared to the BS SS. For the at-risk group, both gesture measurement schemes were significantly correlated with receptive but not expressive language (Table 2). After controlling for nonverbal developmental level, a significant relationship remained between the detailed gesture analysis (but not BS SS) and receptive language. Strong negative correlations between both gesture measurement schemes and ADOS algorithm scores were found in at-risk children with and without controlling for nonverbal development.

Conclusions: In a unique sample of children at-risk for ASD based on language delay, a reduction in early gesture use across two measurement schemes was observed, indicating the importance of gesture measurement in early identification, for both ASD symptoms and for language development. The two methods of quantifying gestures were differentially related to language and ASD symptoms, with detailed gesture analysis more specifically related to receptive language and not nonverbal ability, compared with the BS SS. These findings suggest that obtaining a detailed measure of a child’s gesture use may help determine risk for ASD. 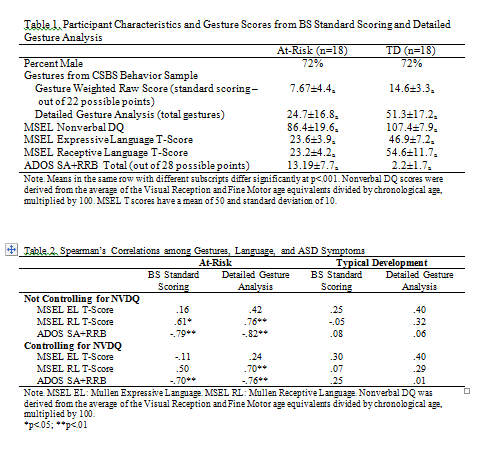