Methods: Here we present CNV and homozygosity analyses in 183 families ascertained through the Homozygosity Mapping Collaborative for Autism (HMCA). This is a specialized ASD cohort highly enriched for families that are consanguineous and/or have multiple affected children. For this study we genotyped parents, children, and additional family members where available, for a total of 747 individuals (255 affected children) from 183 families. To compare findings in our cohort to other autism data sets with distinct ascertainment practices, we also analyzed 706 families from the Autism Genetic Resource Exchange (AGRE) cohort (3013 individuals, 1591 affected) and 1024 families from the Simons Simplex Collection (SSC) (3875 individuals, 1027 affected). The AGRE cohort is enriched for multiplex families, but is largely non-consanguineous, while the SSC is a non-consanguineous cohort enriched for simplex families.

Results: In the entire HMCA about ~25% of affected individuals (39/237) carry a rare homozygous deletion versus ~15% of unaffected. Thus approximately 10% of affected children may be explained by double deletions. We sought to enrich for causative variants through (a) experimental validation with an independent technology (b) strict segregation within the family (c) rejection of double deletions present among unaffected individuals, children or parents, in all three data sets.  Overall we identified 16 events that satisfy all three-selection criteria. Most of the selected events (12/16) disrupt regions identified as transcriptional control sites by the ENCODE project (H3K4Me1, H3K4Me3, and H3K27Ac marks). MonteCarlo simulation confirmed the statistical significance of the finding. In addition, derived from multiple pure cell culture experiments, the importance of control regions is supported by methylation marks defined in primary neuron cultures.

Conclusions: CNV analysis of 183 ASD families enriched for consanguinity demonstrates that children affected with ASD in these families are significantly enriched for autosomal homozygous deletions compared to unaffected siblings, especially in highly consanguineous families (25% versus 15%), suggesting that homozygous deletions account for up to 10% of affected children in consanguineous families. Most homozygous deletions are small (<100 kb) and few interrupt coding regions, presumably inactivating genes, but most do not. Instead we find that affected children are significantly enriched for deletions of DNA regulatory regions, with 12/16 regions disrupting ENCODE regulatory elements, a rate much higher than expected by chance (p<0.05). Our data suggest an important new mechanism of ASD, define a powerful approach to identify essential noncoding DNA regions, and highlight the importance of patterned gene activation in cognitive and social function. 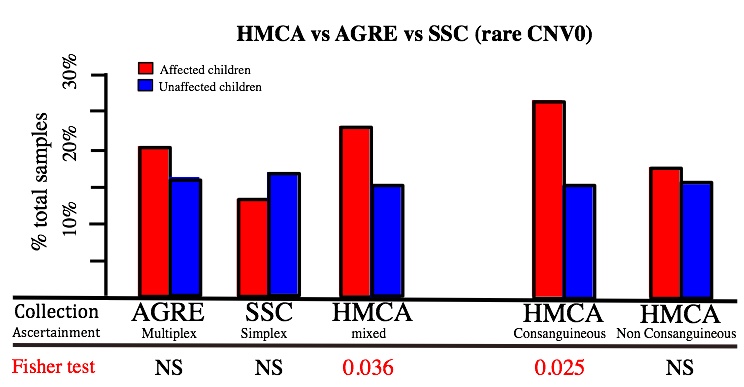