Imperial Ballroom (Grand America Hotel)
A. Kondo1, K. Nishikawa2, T. Konishi3, H. Takahashi4, Y. Kamio5 and R. Mazuka6, (1)The United Graduate School of Education, Tokyo Gakugei University, Tokyo, Japan, (2)Laboratory for Language Development, Brain Science Institute,RIKEN, Saitama, Japan, (3)Graduate School of International Culture and Communication Studies, Waseda University, Tokyo, Japan, (4)National Center of Neurology and Psychiatry; National Institute of Mental Health; Department of Child and Adolescent Mental Health, Ogawahigashi-cho, Japan, (5)National Center of Neurology and Psychiatry, Japan, National Institute of Mental Health, Tokyo 187-8553, Japan, (6)Laboratory for Language Development, Brain Science Institute, RIKEN, Saitama, Japan
Background:  It has long been known that the speech of people with autism spectrum disorders (ASD) has atypical prosodic features [1]. Yet how their prosody differs from that of typically developing persons has not been well-understood. Only recently, an attempt has been made to develop an assessment procedure to evaluate the prosodic skills of those with ASD -- Profiling Elements of Prosodic Systems in Children (PEPS-C) -- which primarily assesses para-linguistic and emotional aspects of prosody [2]. A high-functioning ASD group was found to score significantly lower than a typically-developing group in almost all test items of PEPS-C [3]. The prosody of an utterance, however, has a hierarchical structure (Fig 1), which reflects both linguistic and paralinguistic factors. In Japanese, for example, the intonation structure is determined by lexical pitch-accent, accentual phrases (AP), and intonation phrases (IP) [4]. Given that the lexical and grammatical ability of people with high-functioning ASD are high, it is likely that those aspects of their prosody that are determined by lexical and grammatical factors are intact. If true, it would suggest that the core problem with ASD prosody is likely to be found in the discourse and emotional functions of prosody, which reflect inter-personal communication.

Objectives:  The goal of the present study is to examine whether the linguistic aspects of prosody that are determined by lexical and syntactic features are intact in high-functioning ASD.

Methods:  12 children (10 males, ages 7-17) diagnosed with high-functioning ASD, and 14 typically developing children (8 males, ages 7-16) were tested in an elicited production task. Participants were asked to name one of three pictures on a screen. The pictures were objects and animals which could be labeled with one AP (e.g., “Gorira-dayo” It’s a gorilla), two APs (“Pinku-no doresu-dayo” It’s a pink dress), or three APs (“Pinku-no doresu-no gorira-dayo” It’s a gorilla with a pink dress). Participants’ utterances were recorded, and the minimum, maximum and mean fundamental frequency (F0) of each AP in each utterance were measured. Half of the stimuli consisted of accented words while the other half were unaccented.

Results:  In Japanese, the pitch of an utterance drops at each accented word, as shown in Figure 2. Whether this decrease occurred appropriately, pitch ranges were appropriate for each utterance length, and whether or not intonation for accented and unaccented words were appropriately produced were analyzed. The results revealed that there were no differences between ASD and TD in any measurements.

Conclusions:  The results revealed that ASD participants’ production of lexical and syntactic aspects of prosody is intact. It suggests that people with ASD are able to produce fundamental prosodic structure, suggesting that their difficulties may lie in using prosody appropriately in interactive communication. 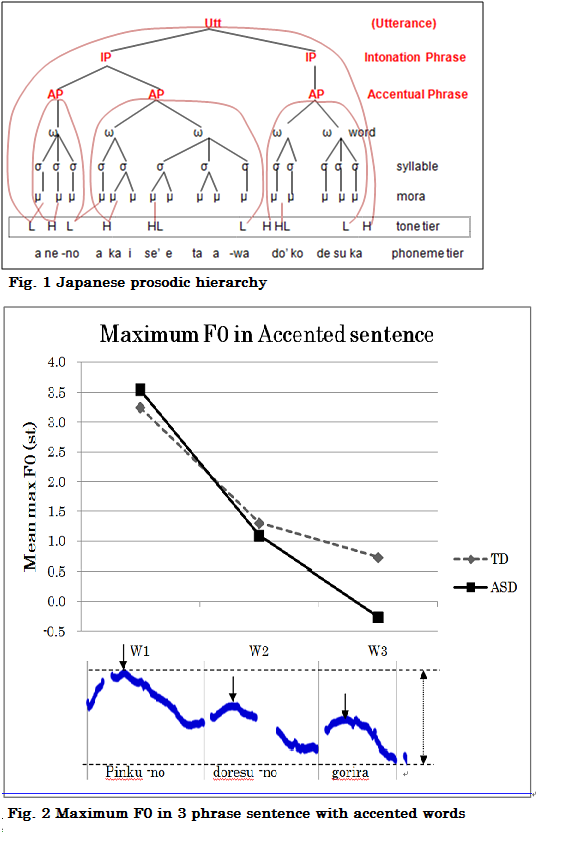