20115
Repetitive Stereotyped Behaviour or “Stimming”: An Online Survey of 100 People on the Autism Spectrum

Repetitive stereotyped behaviour is often described as a core symptom of autism spectrum disorder. There is, however, a disparity between how the scientific and broader autism communities view and describe these behaviours. Within the autism community, so-called repetitive behaviours are commonly described as “stimming", and are considered an important coping mechanism. Also, many self advocates describe autism as an important part of themselves and inseparable from the rest of them (just like gender or sexuality) and therefore, for some, stimming would be considered part of this identity. Yet many of these reports are anecdotal, which means we know very little of peoples’ actual experience of stimming.

This research, conducted by an autistic self-advocate, sought to understand the experiences of stimming from people on the autism spectrum, specifically why the person feels that they stim, whether there are any benefits/pifalls, and whether they need additional support.

100 participants, ranging in age from 16 to 65 years, completed a 10-item online survey anonymously. Of the 100 participants, the majority (75%) had a formal diagnosis of an autism spectrum condition, and the remaining were self diagnosed, in the process of obtaining a diagnosis or answering on behalf of their autistic children. Participants were largely female (66%). participants were asked a range of questions, including why they stimmed, what kind of stims they had, had they been asked not to stim, and if they had always stimmed.

Across participants, there were 11 types of commonly observed stims. The most commonly reported included rocking (48.94%), leg shaking (48.94%) and foot shaking (47.87%). In addition, people listed 73 other types of repetitive routine behaviours, compiled in Figure 1. Participants offered a wide range of reasons for why they stim. The most commonly cited reasons were to reduce anxiety  (71.88%), calm down (68.75%) and when overstimulated (57.29%). 80% of participants said they liked to stim generally or sometimes, 9% said they did not like to stim, and 11% said it depended on the stim.

People on the autism spectrum have a wide range of reasons for stimming, many of which suggested that they viewed stimming as a coping mechanism. Future research should extend this research to researchers and professionals in order to examine potential differences between autism and researcher/practitioner communities. Such research could provide a stimulus for discussion of the value of such behaviours in the lives of people on the autism spectrum. 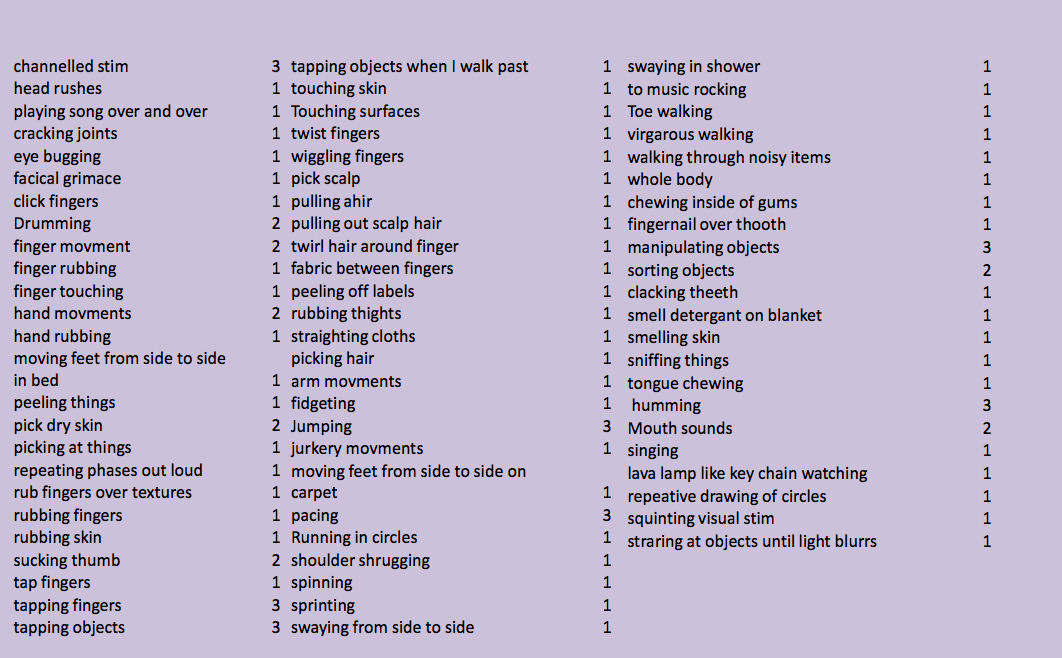