23366
Sensory Responsiveness in Siblings of Children with Autism

Although autism spectrum disorder (ASD) is known to be heritable, the patterns of endophenotypic trait occurrences (inherited traits associated with a particular diagnosis that manifest in family members who do not have the diagnosis) are not well understood. Endophenotypes have emerged as an important concept to help clarify genetic underpinnings of complex neuropsychiatric conditions and to provide insight into underlying etiologies. Evidence has identified several endophenotypic traits, including social impairment, Reduced GABA/Cr (Creatine) matter, whole brain functional hypoconnectivity, visual motion perception, atypical frontal activation during visual attention and immunological functions. Children with ASD have been shown to demonstrate unusual sensory responses to stimuli more frequently than do typically developing peers or those with other developmental disorders.

185 children between ages 4 and 10.95 years participated in this study, 113 with ASD, 33 unaffected siblings, and 39 controls. Sensory Profile Caregiver Questionnaires and Social Responsiveness Scales were completed by parents. A Kruskal Wallis ANOVA was used to examine the differences between the sensory response scores. To quantify the size of the variances, we examined the effect sizes in the children with ASD and the unaffected siblings and compared them to the control participants. Because of multiple comparisons, we used a Bonferroni correction to reduce the chances for a Type 1 error. We used a post-hoc Mann Whitney U test with a Bonferroni correction to locate significant differences. Correlations between the severity and the sensory Z scores were examined using the Spearman’s rank correlation coefficient test.

Sensory responsiveness as an endophenotype of ASD is not indicated from these findings; however, studies with larger numbers of unaffected siblings and controls are needed to confirm the null hypothesis. Touch and taste/smell were the domains most frequently associated with social responsiveness, suggesting the possibility that they may bear some responsibility in social responsiveness problems and may be important targets for intervention for these problems. Finding repetitive behaviors to be frequently associated with sensory responsiveness suggests a relationship between the two and the potential for interventions addressing sensory problems to have an impact on repetitive behaviors. 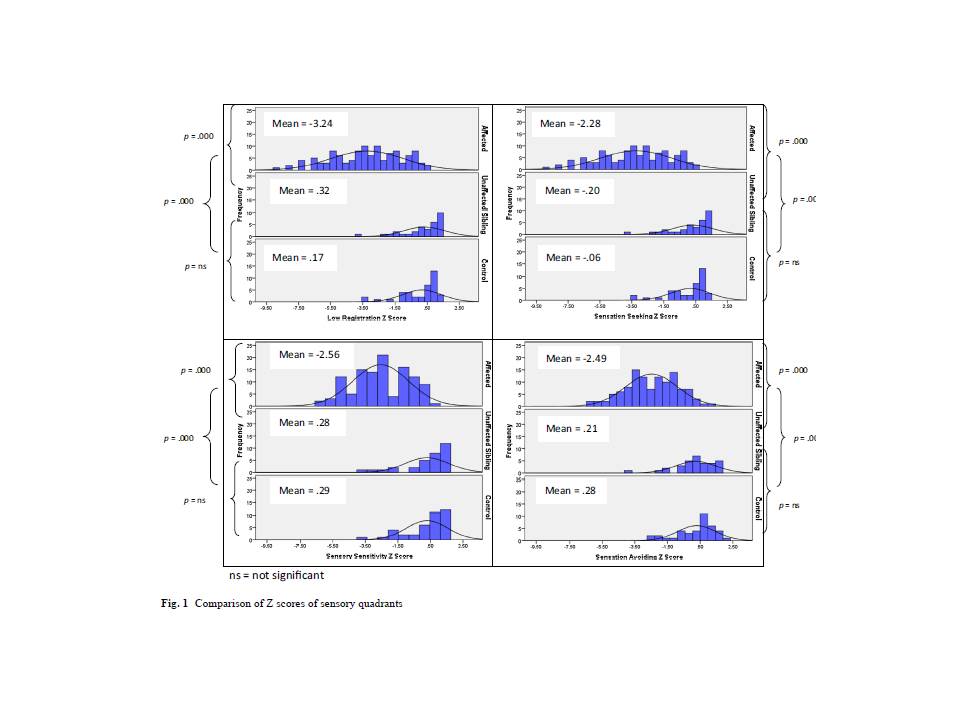