Objectives: Three validated eye tracking paradigms were modified to examine whether social and nonsocial attention differ in boys and girls with ASD.

Methods: ASD girls and boys ages 6-10 and typically-developing girls and boys matched on age and sex are currently being recruited. This abstract details data from 8 girls with ASD on three modified eye-tracking paradigms: 1) a series of visual search arrays that were modified to include male, female and neutral interest items. We present data from male vs. female slides; 2) attention to social images (faces) in the presence of competing object images [either CI or non-CI] measured using a modified paired preference paradigm (Sasson and Touchstone, 2014); 3) a series of social scenes based on the interactive paradigm of Chevalier and colleagues (2015). Scenes were modified to include different levels of sociability (solitary, parallel and dyadic play) and male and female objects. Results for this third paradigm are not reported here, but are anticipated by Spring 2017.

Conclusions:  Our data suggest that girls with ASD may be more socially motivated and drawn to gender typical images, with social attention comparable to prior typically-developing samples. Although the current sample size is small, data collection is ongoing with an expected sample size of 40 by May 2017. Our data has the potential to reveal different attention patterns in girls with ASD that may serve as protective mechanisms by promoting higher social motivation and reduced perseveration on nonsocial images. 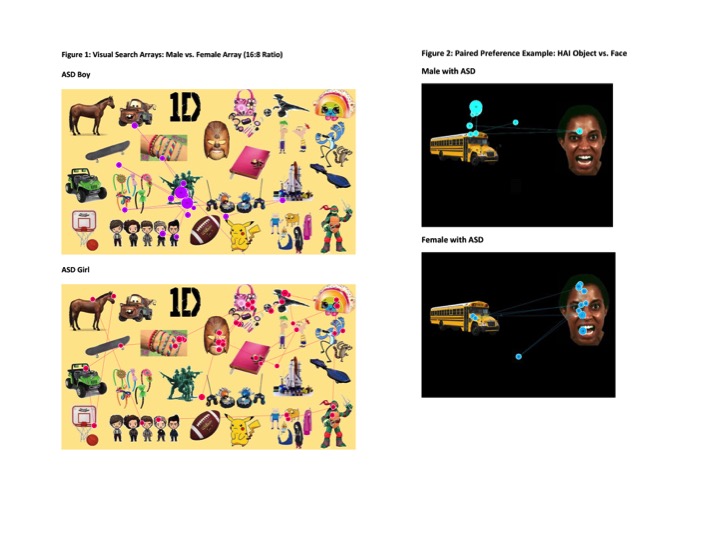