Objectives: This study tests the hypothesis that deregulation of E6-AP-mediated ERα transcriptional signaling in the brain leads to the development of ASD. The project aims are to identify E2-dependent E6-AP target genes in neurons and to study the role of these target genes in the pathogenesis of ASD. Identification of new molecular pathways that are transcriptionally regulated by E6-AP will broaden our understanding of ASD.

Methods: Potential E6-AP target genes were identified by microarray of MCF-7 breast cancer cells. Cells from the mouse neuroblastoma Neuro2a cell line or mouse hippocampus were cultured. Cells were transfected with E6-AP or had E6-AP knocked down by siRNA and then were treated with physiologically relevant doses of estrogen, the ER antagonist tamoxifen, or vehicle. Assays included western blot, co-immunoprecipitation, chromatin immunoprecipitation, luciferase assay, qRT-PCR, and microscopy.

Results: 1) E6-AP and ER colocalize in mouse HPC neurons. 2) E6-AP and ERα translocate to the nucleus of Neuro2a (N2a) cells upon E2 treatment. 3) E6-AP and ERα complex in N2a. 4) E6-AP is essential for E2-ER-activated Cyp26b1 gene expression (encoding for a retinoic acid (RA) catabolizing enzyme essential to the learning, memory, and neurological pathways that are impaired in ASD) in N2a and for RA receptor β expression (Figure 1). 5) Putative E2 Responsive Element (ERE) motif from the Cyp26b1 promoter is functional in a luciferase reporter gene assay (Figure 2). 6) ER and E6-AP are recruited to the Cyp26b1 ERE in N2a resulting in transcription of Cyp26b1. 7) The learning and memory gene for prostaglandin E receptor 4, PTGER4, is also E6-AP and E2-dependent. 8) The learning and memory gene for the NPY receptor, NPY1R, is also E6-AP and E2-dependent.

Conclusions: We have identified 3 memory and learning genes that are transcriptionally regulated by E6-AP and E2-dependent: Cyp26b1, PTGER4, and NPY1R. This is evidence that these 3 genes may be altered in ASD, leading to learning and memory symptoms. Cyp26b1 is crucial to the levels of retinoic acid, which is important for neurodevelopment, in the brain. PTGER4 allows phosphorylation of glycogen synthase kinase 3 (GSK3). GSK3 has a large role in apoptosis and has been implicated in neuropsychiatric disorders such as Alzheimer’s Disease and Bipolar Disorder. The NPY receptor functions in cell signaling, increasing calcium signaling and blocking adenylate cyclase. Further testing in rodent models will be necessary to confirm these promising findings and elucidate the molecular pathways for pharmacologic manipulation. 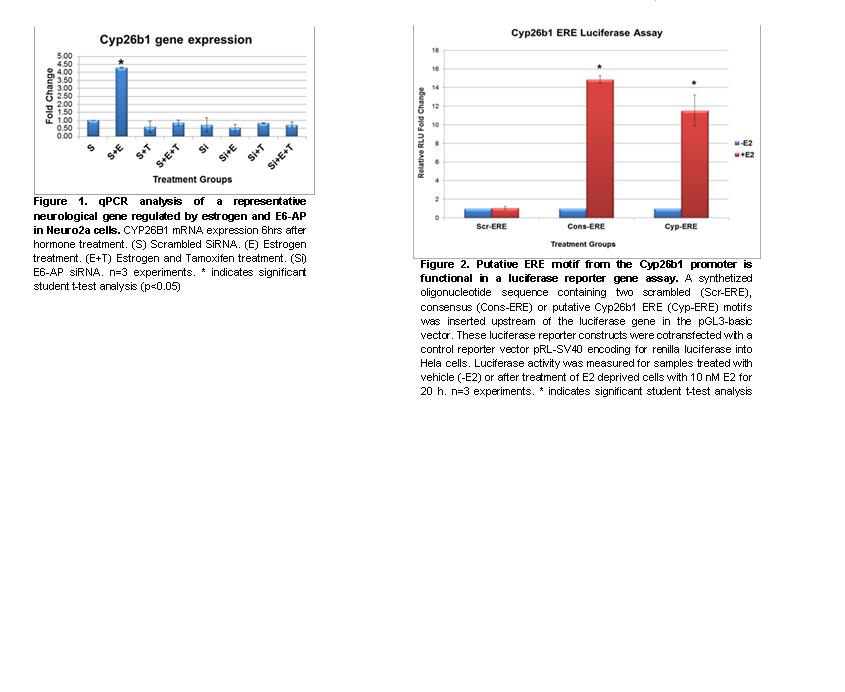