Objectives: Objectives are 1) to summarize categorical and dimensional phenotypic features of known cases of DYRK1A mutations; 2) to compare incidence of features to those in a large sample of individuals ascertained for ASD and a cohort of individuals with other disruptive genetic events associated with ASD, such as CHD8; 3) to situate phenotypic variability in cases of DYRK1Ain the context of their non-carrier parents’ phenotype, thus accounting for familial background and “expected” outcome in the absence of the mutation.

Methods: Participants of this study include 61 individuals with de novo DYRK1A mutation (i.e. probands), including previously published cases and participants of The Investigation of Genetic Exome Research (TIGER) study at the University of Washington. A subset of 10 probands and their non-carrier parents who received standardized assessments of IQ, social behavior (Social Responsiveness Scale), motor skills (Purdue Pegboard Test), and physical measurements (e.g. head circumference, height, weight) will be used to calculate effect sizes between probands and their parents. Comparison samples include two large cohorts of participants with ASD: the Simons Simplex Collection and the Genetic Linkage Study of Autism. Additional comparisons will be made with subjects from the TIGER study with ASD-associated CHD8mutations. Nonparametric analyses will be used to compare categorically-measured phenotypic features and univariate ANOVA will be used for continuous phenotypic variables.

Results: Preliminary findings from analysis of 29 DYRK1A probands reveal high rates of Intellectual Disability (100%), language delays (100%), microcephaly (90%), feeding difficulties (89%), and ASD (60%) (see Table 1). Data collection is ongoing with further analyses identifying parent-proband effect sizes for a cohort of individuals with DYRK1A mutations and their parents (n = 10) and comparing effect sizes to cohorts with ASD and those with CHD8mutations.

Conclusions: Recurring features emerge across individuals with mutations to DYRK1A. Specifically, a majority of individuals with DYRK1A exhibit intellectual disability, speech delays, motor impairments, microcephaly, seizures, ASD, and feeding difficulties as has been reported in smaller cohorts in previous literature. Analyses of parent-proband effect sizes will provide an estimation of DYRK1A’s impact on cognitive, behavioral, and physiological domains, and will inform the variability in phenotype observed across individuals. 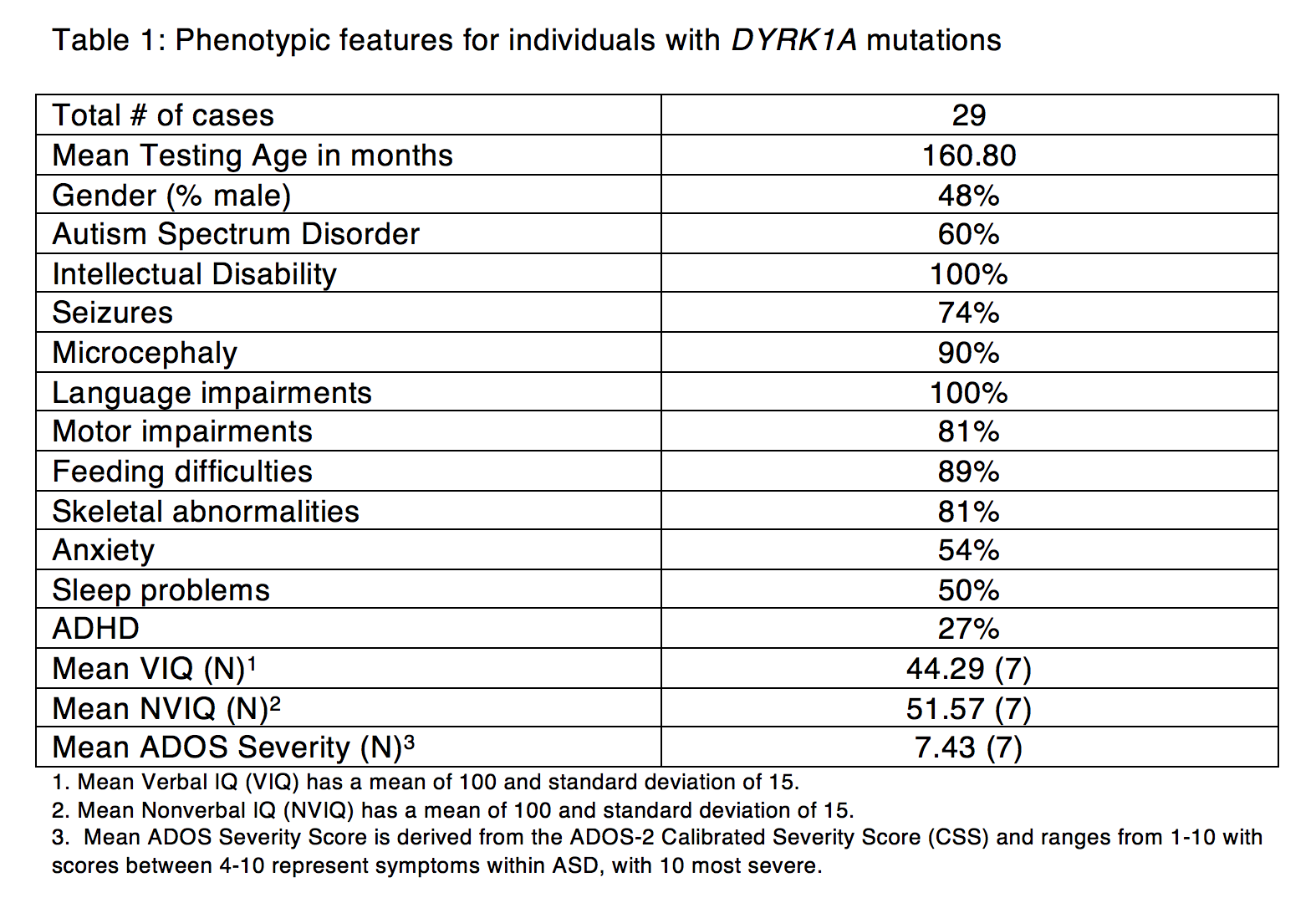