23610
Movement during MR Scanning in Children with Autism Spectrum Disorder

Objectives:  To assess the movement behavior of children with and without ASD during edited MRS of GABA.

Methods:  Volunteer and parental consent was obtained under local IRB approval. Eligibility: Children with ASD met DSM-V diagnostic criteria, confirmed using the Autism Diagnostic Observation Schedule-Version 2 (ADOS-2). All typically developing children (TDC) were free of criteria for psychiatric disorders based on the Diagnostic Interview for Children and Adolescents. Data were acquired in 21 children with ASD and 20 TDC with normal IQ (8–12 yrs). Imaging: GABA-edited MR spectra were acquired from a 27 mL voxel over the right primary sensorimotor area using MEGA‑PRESS on a 3T Philips Achieva scanner (Philips Medical Solutions) (320 transients; scan time = 10 min). Children watched a movie during scanning. Analysis: The frequency of the suppressed water signal in each transient (frame) was extracted for both groups using Gannet 2.0. The step size between each frame was calculated and a frequency step over 2 Hz (0.016 ppm) was defined as a motion event. Differences in movement behavior in the two groups were assessed in terms of (i) size and number of movements and (ii) correlation with time point of movement (i.e., are children more likely to move near the beginning or end of the scan?).

Conclusions: These data show that children with ASD do not show more movements than TDC during MRS scanning. These results are important in establishing that previously reported GABA differences are not driven by movement. More children with ASD show no movement behavior (ten without movement versus five for TDC, Fig 1). There were no significant differences in the size of movement. Importantly, children are more likely to move near the end of a 10-min scan so while shorter scans (e.g. 7 minutes instead of 10) may impact SNR, they may benefit from reduced movement related artefacts. Near-end-of-scan motion should be taken into account when planning MRS experiments, as well as prospective frequency and motion-correction. 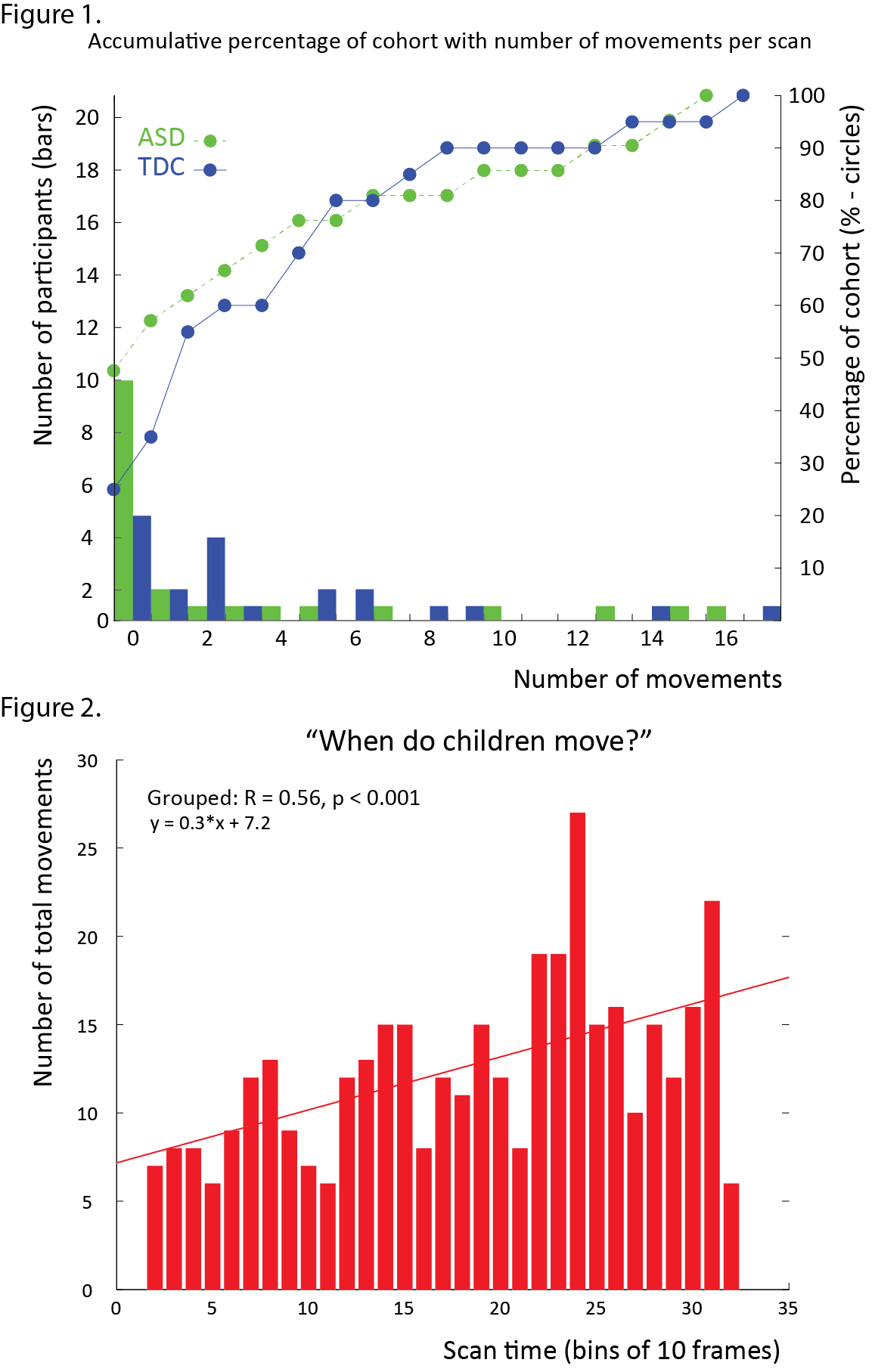