Despite increasing efforts to investigate restricted and repetitive behaviors (RRBs) as one of two core symptoms of autism spectrum disorder (ASD), little is known about their expression in minimally verbal (MV) individuals. Previous research quantifying RRBs in MV individuals with ASD used parent report to supplement routine observations taken during diagnostic testing, but there have been no systematic analyses of RRBs observed during a semi-structured clinical assessment compared with parent report.

First, to quantify the expression of RRBs in MV children and adolescents with ASD using direct observation methods and to compare those results to parent report and, second, to examine the relations been RRBs and age, nonverbal IQ (NVIQ), and receptive vocabulary.

Two raters independently coded ADOS-2 and Adapted ADOS videos for the frequency of RRBs (Kappa=0.81), using a coding scheme based on Repetitive Sensory Motor (RSM) and Insistence on Sameness (IS) subcategories (Bishop et al., 2013) and operational definitions similar to those from the Autism Diagnostic Interview-Revised (ADI-R) and the Repetitive Behavior Scale-Revised (RBS-R). Because administration duration of the ADOS varied across participant (range=45-60 minutes), the frequency of RRBs was translated into rate-per minute of RRBs.

Parents reported the current frequency and intensity of participants’ RRBs on the ADI-R and RBS-R. Table 1 shows the percentage of participants who exhibited one or more of the specific RRBs according to parent report.

RSM behaviors expressed by MV individuals with ASD are salient enough to be observed in a brief, semi-structured lab setting as well as in the daily activities parents observe. However, format of parent report and method of completion (i.e., interview vs. self-completed questionnaire) could influence correlational results between lab observations and parent report. The lack of correlations between observed and parent-reported IS behaviors are likely a result of their relatively low frequency in a novel laboratory environment.

In addition, the negative correlation between RSM behaviors and receptive word knowledge suggests the need for language and communication interventions to supplement standard behavioral interventions in this population. 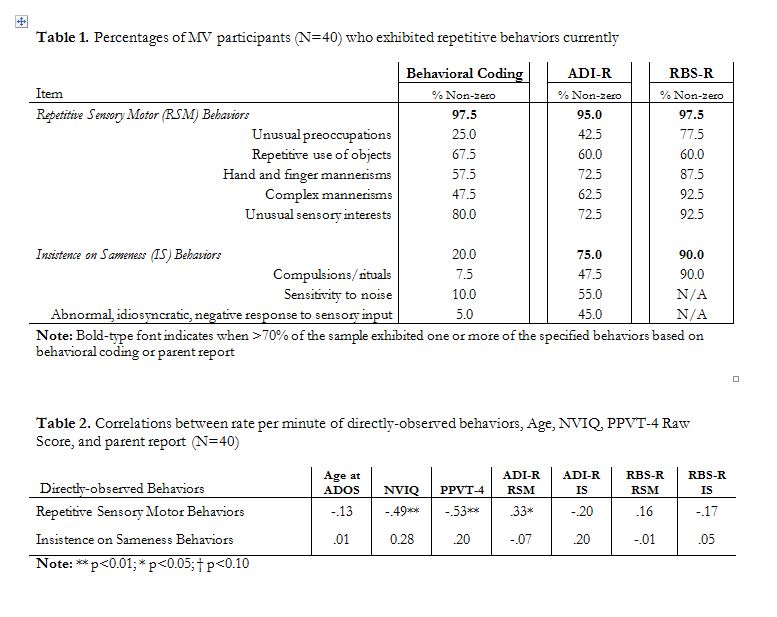