Yerba Buena 8 (Marriott Marquis Hotel)
A. Fitch1, A. Valadez1, P. A. Ganea2, A. S. Carter3 and Z. Kaldy1, (1)Psychology, University of Massachusetts Boston, Boston, MA, (2)Applied Psychology & Human Development, University of Toronto, Toronto, ON, Canada, (3)University of Massachusetts Boston, Boston, MA
Background: Much of what is learned about the world occurs outside of the visual field. A unique and important aspect of human cognition is the ability to gather knowledge through language. Previous work with typically-developing (TD) toddlers suggests that the ability to use verbal information to make and update expectations about the visual world emerges by 16 months (Ganea et al., 2016). It is unknown how the development of this skill might differ for very young children with autism spectrum disorder (ASD), who often display weak receptive & expressive communication skills.

Objectives:  The goal of this study was to examine the abilities of toddlers with ASD to form expectations based on verbal versus visual information.

Methods:  Participants were 19 toddlers with ASD (18-36 months, M = 28.2 months) and 26 TD toddlers (15-22 months, M= 18.6 months). ASD diagnoses were confirmed with the ADOS-2 and a licensed psychologist’s clinical impression. Using an eyetracker, we presented toddlers with a scene of a cat and dog. The scene was then occluded, and one of the animals (e.g. the cat) changed location. Toddlers either saw the cat passing between occluded locations (visual condition), or heard a description of it (verbal condition). We next revealed either a congruent outcome (the cat in the new location), or an incongruent outcome (the dog instead). Toddlers participated in both visual and verbal conditions, as well as congruent and incongruent trials (order was counterbalanced for congruency and condition). Looking time and number of fixations to the outcome were compared across congruency, condition (visual vs. verbal), and diagnostic group. Toddlers were assessed on the Mullen Scales of Early Learning (MSEL); the groups were not significantly different on nonverbal scales (visual reception and fine motor).

Results: There was a main effect of congruency on looking time (F(1, 43) = 4.25, p = .04, ηp2 = .09), and number of fixations (F(1, 43) = 5.865, p = .02, ηp2 = .12). Both measures were significantly higher in the incongruent than the congruent outcome across both groups and conditions. There was no main effect of condition, and no interactions, suggesting no verbal deficit for the ASD group (ηp2 < .005) There was a main effect of diagnosis on looking time (F(1, 43) = 8.94, p <.001, ηp2 = .17); TD participants looked longer overall. This effect was not present in the fixation count analysis, that is, participants with ASD accomplished the same amount of scene exploration in less time. The success of toddlers with ASD in the verbal condition is even more impressive as they had significantly lower receptive language scores on the MSEL than TD controls, (p<.001).

Conclusions: Both groups of toddlers looked longer and performed more exploration of incongruent outcomes, suggesting that they could use both visual and verbal information gathered during occlusion to generate expectations about the outcome. In other words, despite their weaker receptive language skills, 2-year-old toddlers with ASD showed no impairments in forming expectations based on linguistic information in our paradigm. 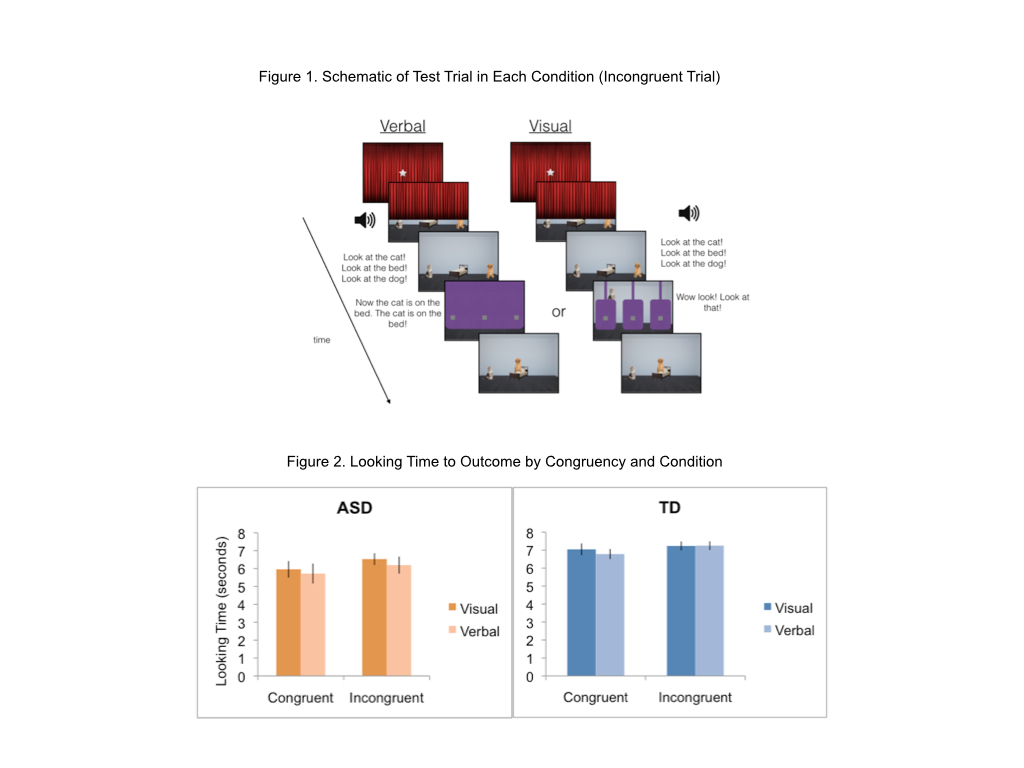