24464
Changes over Age in Eye-Gaze Pattern in ASD from Childhood to Adolescence: A Cross-Sectional Eye-Tracking Study

Objectives:  In this context, the current study sought to investigate (i) whether individuals with ASD exhibit differences in eye-tracking pattern compared to TD children; and (ii) how this eye-gaze pattern could change with age during the childhood and adolescence period in ASD and TD children.

Methods: Forty-four children with ASD (age = 8.7 ± 3.7, range: 2.3-16) and forty-six TD children (age = 9.5 ± 3.5 range: 2.6 -17.9) participated in this study. ASD diagnosis was based on DSM IV-R and ADI-R criteria. Tobii-T120 eye-tracker was used to measure eye-gaze processing during passive visualization of social movies displaying characters engaged in peer to peer social interactions (Saitovitch et al., 2016). Viewing time was measured in areas with strong social contents (face-region) and in non-social areas (background-region). Firstly, viewing time was compared between ASD and TD children. Subsequently, a correlation analysis was performed between age and viewing time to the face or background-region. For both analyses we used linear regression model.

Conclusions: The present cross-sectional study confirmed differences in viewing time to face and background non-social region between ASD and TD children. Furthermore, we present for the first time a correlation between age and viewing time to face and background-region in children with ASD that could reflect an adaptation and learning process. We can suppose that fixation to face is innate in TD children whereas for children with ASD it constitutes a learned behavior that change with age. Longitudinal studies are needed to confirm these results. 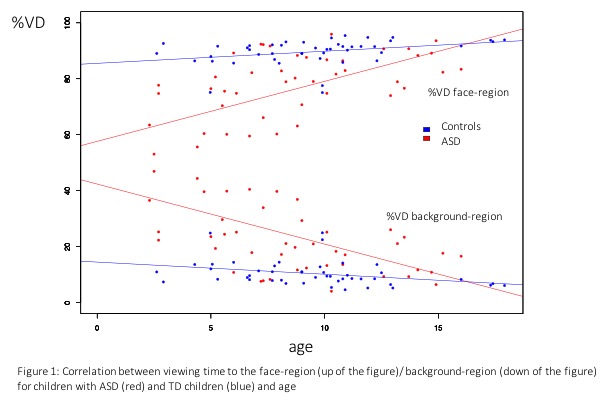