Golden Gate Ballroom (Marriott Marquis Hotel)
A. K. Azeez, X. Di and B. Biswal, Biomedical Engineering, New Jersey Institute of Technology, Newark, NJ
Background:  There is a higher prevalence of males diagnosed with autism spectrum disorder (ASD) than females. This disproportionality in pathology is a question of great interest, but it is still largely unknown on the underlying neural basis of the sex differences. Large scale data sharing, such as ABIDE (Autism Brain Imaging Data Exchange) has enabled the study of sex differences in brain structures and functions (Di Martino et al., 2014). Analyses of ABIDE I data have shown similar expanded gray matter volumes in bilateral temporal lobe in females and males (Di and Biswal, 2016), and sex-dependent gyrifications in the ventromedial prefrontal cortex (Schaer et al., 2015). With the latest release of ABIDE II, we aimed to examine sex modulations on cortical thickness alterations in children with ASD.

Objectives:  To determine if there exist sex-dependent or sex-independent brain structural alterations in children with ASD compared with typically developing (TD) children.

Methods: A total of 552 subjects were used from ABIDE II, with sites that have at least 2 females with ASD. Subjects younger than 20 years old and with those with a full scale IQ greater than 70 were included. Exclusions taken into account, leave us with ASD pool of 237 children (42 females) and 315 TD children (115 females). With a 2 (diagnosis) by 2 (sex) design, we examined whether there are brain alterations in ASD compared with TD that are modulated by sex (a diagnosis by sex interaction) or similar in both sexes (a diagnosis main effect).

T1 weighted MRI (magnetic resonance imaging) images were analyzed using FreeSufer. It performs skull stripping, gray-white matter segmentation, and cortical thickness, a measure of the distance between the white matter and pial surfaces. A 15 mm2 Gaussian smoothing was applied. Using FreeSufer's Query, Design, Estimation, Contrast (QDEC) application a 2 x 2 factorial design was created, with diagnosis and gender as factors, and age, IQ, and site of scan serving as cofactors. Statistical analysis was done for each hemisphere. Clusters are initially threshold at p < 0.01 to find clusters of interest, followed by Monte Carlo cluster-level multiple comparison with p < 0.05.

Conclusions:  We identified sex-dependent cortical thickness alterations in ASD in the right occipital cortex, which may relate to sex differences in sensory processing in ASD. Sex-dependent cortical thinning was also observed in the anterior cingulate cortex. Both clusters were not reported in studies using ABIDE I data (Di and Biswal, 2016; Haar et al., 2014; Schaer et al., 2015). It may due to sampling variability, and suggests that there may be large heterogeneity in ASD samples. Further studies are needed to examine consistency and heterogeneity of results from ABIDE I and II. 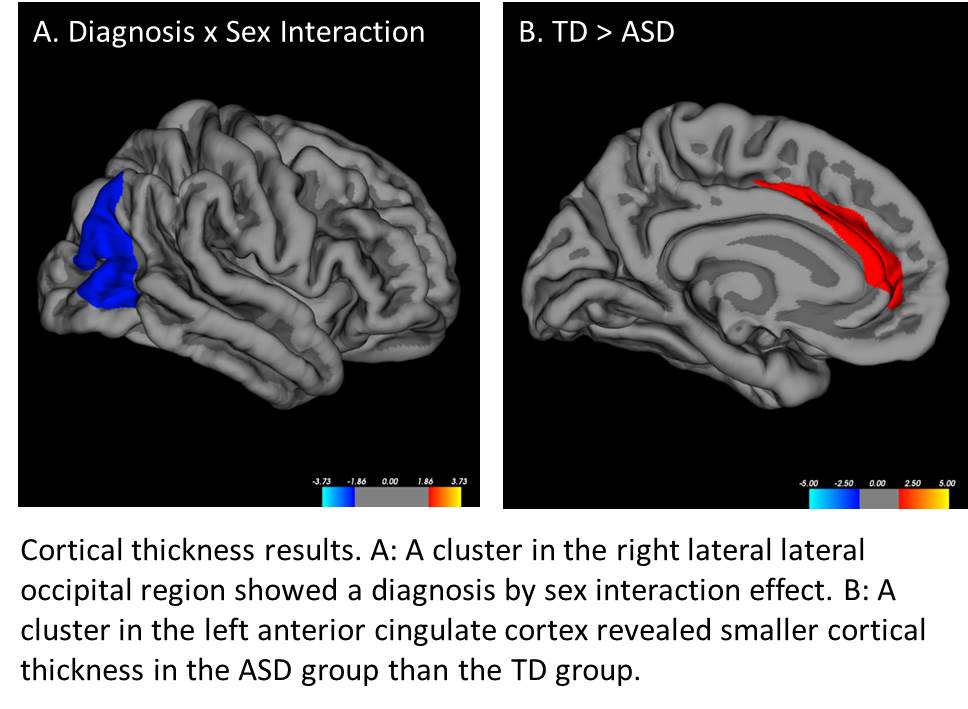