Golden Gate Ballroom (Marriott Marquis Hotel)
B. Keehn1, J. B. Wagner2, H. Tager-Flusberg3 and C. A. Nelson4, (1)Purdue University, West Lafeyette, IN, (2)College of Staten Island, CUNY, Staten Island, NY, (3)Psychological and Brain Sciences, Boston University, Boston, MA, (4)Boston Children's Hospital, Boston, MA
Background: Flexibly shifting attention – disengaging from a current locus and shifting attention to a new object or event within the environment – plays an important role in the development of both social orienting and arousal regulation. In infants at high risk for autism (HRA), slowed attentional disengagement is one of the earliest impairments reported, and is associated with a later diagnosis of the autism spectrum disorder (ASD). Thus, early deficits in disengagement may contribute to the atypical development of social orienting and/or arousal regulation, and play an important role in the emergence of ASD.

Objectives: To investigate the association between attentional disengagement, measured at 6 months, and development of social orienting and arousal modulation, measured at 12, 18, and 24 months, in HRA (with and without a later diagnosis of ASD) and low-risk comparison (LRC) infants.

Methods: Infants completed visits at 6, 12, 18, and 24 months of age. An eye-tracking paradigm was used to assess the speed of attentional disengagement at 6 months (n=35 HRA; n=42 LRC). Latency to disengage attention was measured as the time necessary to shift attention from a central fixation (i.e., a face) to a peripheral target. Social orienting abilities were assessed using three observational measures, the Communication and Symbolic Behavior Scales (CSBS) and the Autism Observation Scales for Infants at 12 months, and the Autism Diagnostic Observation Schedule at 18 and 24 months, as well as the CSBS parent-report questionnaire at 12 and 18 months. Arousal regulation was measured using a series of parent-report questionnaires: the Infant Behavior Questionnaire at 12 months, the Toddler Behavior Assessment Questionnaire at 18 and 24 months, and the Infant Toddler Social Emotional Assessment at 12, 18, and 24 months. Items and subscales from these measures were standardized and averaged to create social orienting and arousal regulation composite scores at 12, 18, and 24 months. 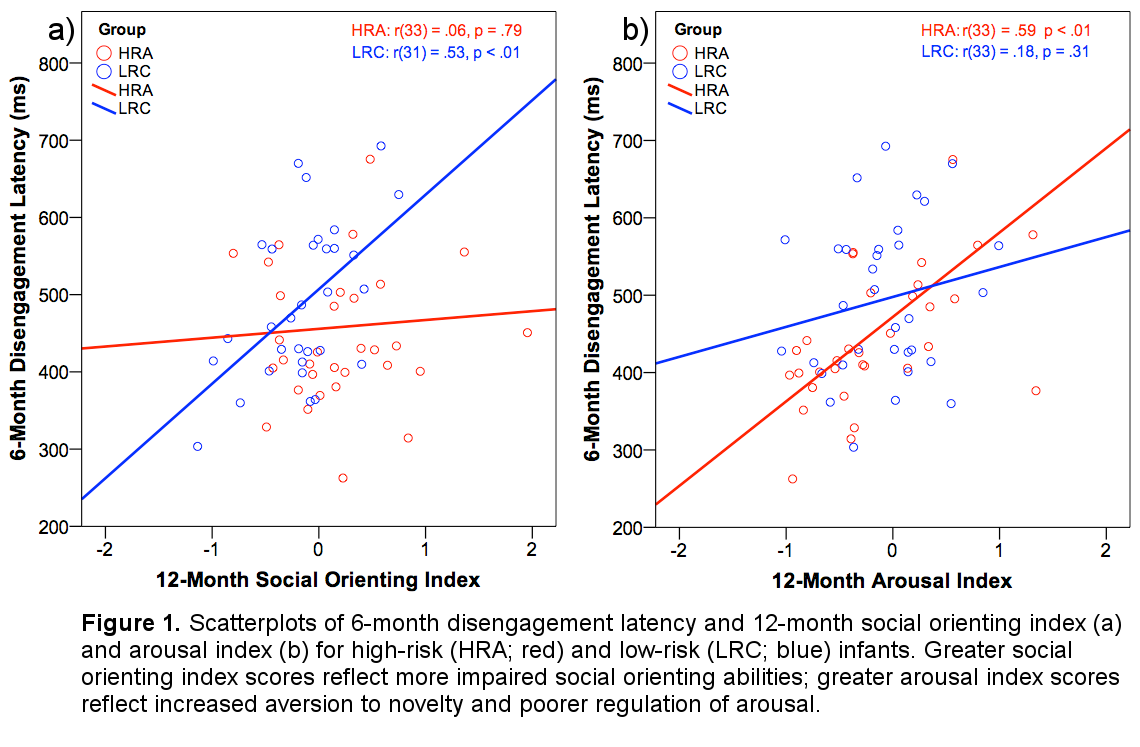