24707
Neural Signature of Dynamic Facial Processing in Children with ASD

The focus of current work is twofold: 1) to examine spectral power in the mu rhythm during the observation of dynamic facial information perception in ASD and 2) to extend our understanding of this neural activity to social behavior.

Children with ASD (n=37, M=11.6, SD=3.24) and typically developing (TD) children (n=42, M=11.5, SD=2.21) participated in an EEG study during which they were presented with photorealistic, computer-generated faces. As reported in Naples et al. (2015), the faces consisted of fearful movement and affect free movement (puffed cheeks). Power spectra relative to resting baseline across scalp electrode clusters surrounding C3 and C4 were averaged across trials for each condition. Following Bernier et al. (2013), mu attenuation was calculated as the log of the ratio of power in 8-13 Hz during observation over power in the same frequency range during resting baseline for each individual. Data collected from the Benton Facial Recognition Test (BFRT, Benton, 1983) and the Reading the Mind in the Eyes Task – Revised (RMET-R; Baron-Cohen et al., 2001) served as social behavior outcomes.

Univariate ANOVA indicated that both groups displayed mu attenuation in response to dynamic facial movement relative to a resting state baseline. However, there was no significant effect of group (p=.196) or condition (p=.654) on mu attenuation. Consistent with previous literature, one-way ANOVA indicated that children with ASD scored significantly lower (2.46 points) on the RMET-R [F(1,77)=11.57, p=.001]. Group differences were not observed on the BFRT (p=.09).

Despite group differences in behavioral measures of social information processing based on observation of static images of emotionally expressive eyes in ASD, as indexed by the RMET-R, children with ASD and TD in this study exhibited similar patterns of mu attenuation in response to facial movement. These results concord with previous research failing to find differences in mu attenuation across diagnostic groups, extending these results to the perception of dynamic facial movement. 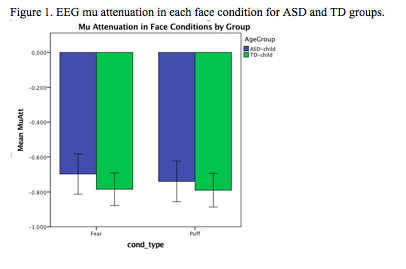