Golden Gate Ballroom (Marriott Marquis Hotel)
J. J. Li1, J. Parish-Morris2, L. Bateman3 and A. Nenkova1, (1)Computer and Information Science, University of Pennsylvania, Philadelphia, PA, (2)Center for Autism Research, Children's Hospital of Philadelphia, Philadelphia, PA, (3)The Center for Autism Research/CHOP, Philadelphia, PA
Background: Successful communication is a careful balancing act: speakers must gauge the appropriateness of producing statements that are highly detailed vs. statements that are more general. Whereas too much detail may overwhelm the listener, vague statements with too little detail can sound vacuous. In this study, we begin to test the hypothesis that some communication difficulties experienced by individuals with autism spectrum disorder (ASD) may be due to challenges in understanding or producing appropriate levels of communicative specificity during conversation. To enhance the scalability of our efforts, we use a novel, automated tool to accurately quantify sentence specificity (Li & Nenkova, AAAI 2015). Our long-term goal is to determine the extent to which existing automated tools and computational theories of language vagueness and specificity can elucidate differences between individuals with ASD and typical controls, for the purposes of enhancing screening, diagnosis, treatment planning, and intervention response measurement.

Results: Preliminary analyses revealed significant gender differences in both AQ and specificity judgments; male and female data were thus analyzed separately. We found no correlation (rho=-0.01) between male judgments of specificity and AQ. For females, however, the correlation between perceived specificity and AQ score was -0.29, trending toward significance (p=0.08). Women with higher AQ scores perceived sentences to be more specific than women with lower AQ scores. In the summarization task, we found that females with higher AQ scores tended to write summaries that were more general (rho=-0.22, p=0.18).

Conclusions: Our study is the first to examine the perception and production of linguistic specificity in people with varying degrees of autism-like symptoms. Although preliminary, our results reveal previously unexplored gender differences, which we plan to confirm with a larger sample and participants with official ASD diagnoses (anticipated by May 2017). This is the first step in a research program aimed at developing technology-augmented interventions to visualize the mismatch in expectations regarding specificity to both typical people and individuals with ASD, to improve the quality of communication across the two groups. Furthermore, we aim to develop a battery of tests to quantify an individual’s perception of specificity, and explore the use of these metrics for assessing intervention effectiveness. 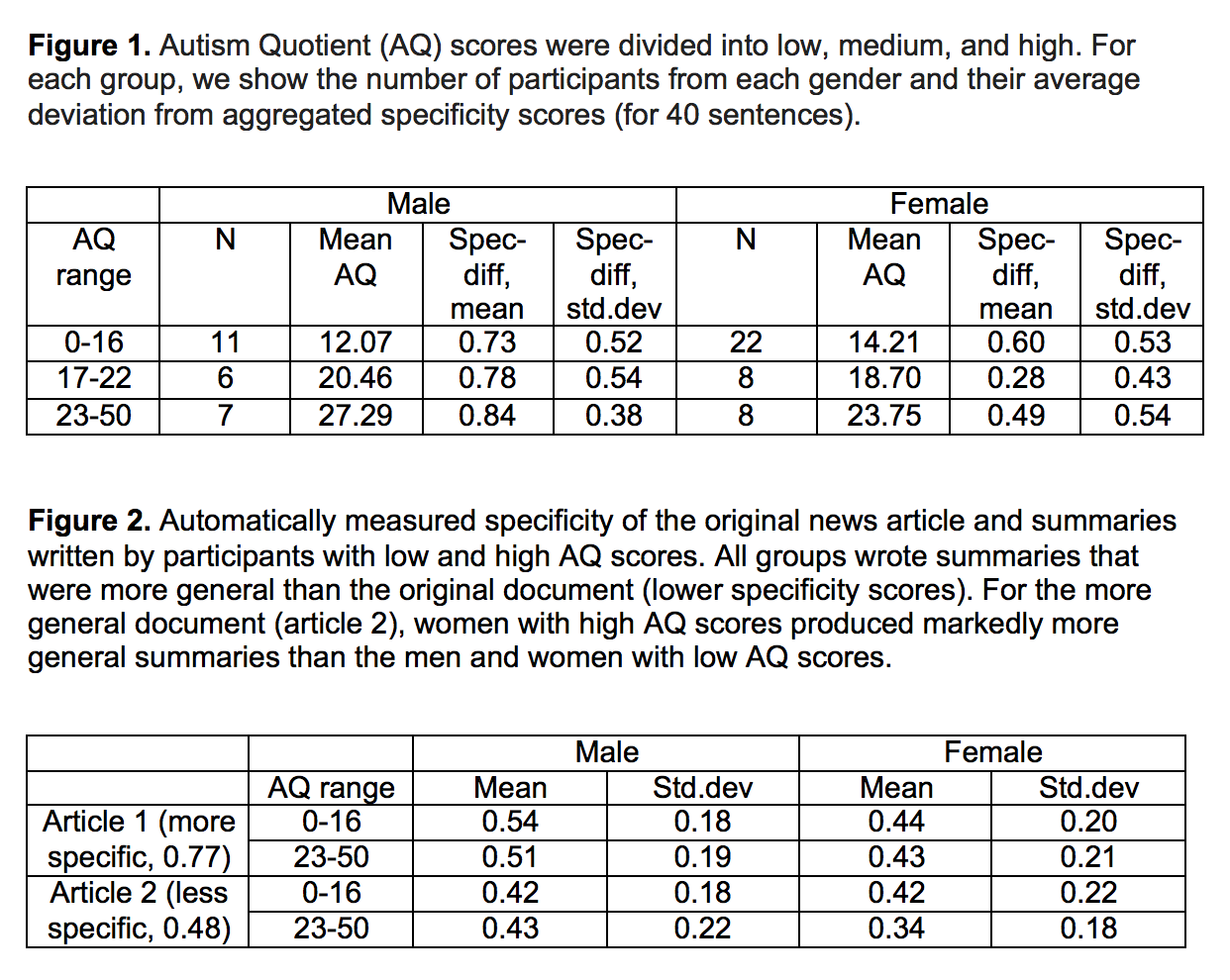