24868
Stability and Change in ASD Symptoms from Childhood to Young Adulthood: Associations with Spoken Language Development

Methods:  S-C symptoms of 132 children with ASD referred before 2 years were assessed using the Autism Diagnostic Interview-Revised (ADI-R) at five ages (approximately 2, 3, 5, 9, 18). Ten items from Current Behavior Algorithm S-C domain were summed to yield three subdomains (Nonverbal Behaviors, Shared Enjoyment, Socioemotional Reciprocity) and an overall S-C score. Because most children were language-delayed at 2, the sample was divided by language level at 3 and 18: verbal at 3 and 18 (V-V), delayed at 3/verbal at 18 (D-V), delayed at 3/minimally verbal at 18 (D-MV). Generalized Linear Mixed Models were used to explore trajectories of S-C symptoms; main effects of time and language group and time*language interactions were assessed.

Results:  Overall S-C scores decreased across time (Fig1; p<.001). The D-MV group exhibited the most impaired S-C at all ages (p<.001). D-V and V-V differed only at T3 (p<.001). From 2-18, the D-MV group showed less improvement (Mdiff=2.65) than D-V (Mdiff=6.47) and V-V (5.91). Trajectories of Shared Enjoyment and Socioemotional Reciprocity showed similar patterns, with V-V and D-V groups demonstrating the greatest reduction in symptoms. Notably, the V-V group showed significant improvements in Shared Enjoyment from 2-3 and 3-5, whereas Socioemotional symptoms declined the most between 2-3. S-C items provided evidence for improvement, stability and, worsening of individual symptoms (Fig.2). While some items showed improvement across language levels, reduction of most symptoms seemed to be related to language development. Items relating to nonverbal communicative behaviors (inappropriate facial expressions and social smiling) showed stable or worsening trajectories.

Conclusions:  Consistent with prior studies, overall social-communicative symptoms declined across childhood. These data suggest, however, that apparent improvements in some symptoms may be attributable to language gains, whereas others show improvement or stability across language levels. These findings underscore the difficulty in separating social and language abilities and the need to consider language skills when interpreting estimates of social-communicative behaviors, particularly in longitudinal or treatment studies monitoring changes over time. It is also important to highlight that ADI-R diagnostic classifications are based upon past behaviors; declines in symptoms (regardless of relation to language) demonstrate why current behaviors cannot be used in place of past symptoms for diagnostic purposes. Finally, differences in symptom presentation by both language and age highlight the need to develop new tools to assess current symptoms, particularly in adults with more developed language. Tools developed for use with younger children may not include items that capture the full manifestation of ASD in adulthood. 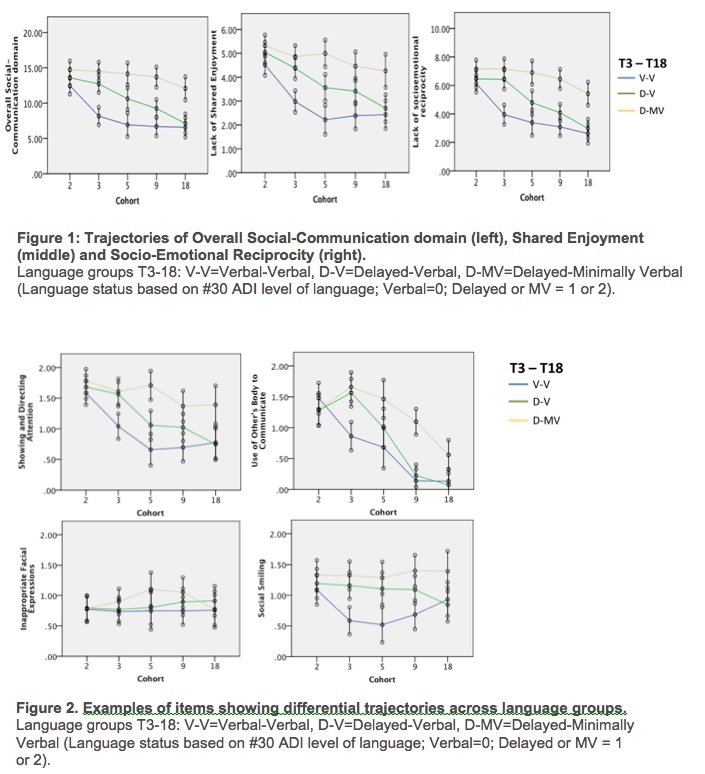