Objectives: This study examined symptom trajectories in infants and toddlers referred for possible ASD and other developmental disorders as well as typical controls using a high-density of observations from 12-36 months of age.

Methods: A total of 153 children (103 ASD) with baseline assessments at the mean age 18 months (SD=4.2) and final assessments at 31 months (SD=5.7) were administered the Autism Diagnostic Observation Schedule (ADOS) for every 1-6 months. All children initially received the Toddler Module and 58 children transitioned to Module 2 at the average age of 30 months (SD=3.53). Symptom trajectories were examined based on Proc Traj using the calibrated severity scores. Changes in NVIQ and VIQ scores as well as each item score on the ADOS Toddler Module were examined using the Generalized Linear Mixed Model (GLMM).

Results: Using the minimum BIC as the selection criterion, the best trajectory typology was a model with four classes (Figure 1; nonspectrum ~ 24%; worsening ~27%; moderately persistent~24%; severely persistent ~25%). Children with ASD were more likely to belong to the worsening, moderately persistent and severely persistent groups (71%, 97% and 97% respectively) than the nonspectrum group (8%), χ²(3)=417.816, p<0.001. Most children who developed phrase speech by age 3 were more likely to belong to the nonspectrum and worsening groups (50%) than the other two groups (17-28%), χ²(3)=228.692, p<0.001. Trajectory groups showed significant differences in baseline ADOS calibrated severity scores (Table 1) (F=46.705, social affect; F=10.287, repetitive behaviors; p’s<0.001). At both the baseline and final evaluations, the four groups varied significantly in their NVIQ and VIQ scores (p’s<0.001). NVIQ was stable for all groups whereas group by age interaction emerged for VIQ (F=1.423, p<0.05) as VIQ improved for the nonspectrum and worsening groups but was stable for the other two groups. At the item level, children showed either an improvement (e.g., frequency of vocalization, use of gestures) or stability (e.g., eye contact, facial expression) on a majority of items although a few symptoms worsened (e.g., response to name).

Conclusions: Trajectories of ASD symptoms were most strongly predicted from initial levels of social communication impairments. Symptom levels for most children within the moderate to severe ranges initially were stable over the first and second year of life. A subset of children with ASD (20%) showed mild symptom levels during the first year, which worsened gradually over time, consistent with the past findings (e.g., Ozonoff et al., 2015). The initially lower symptom level may delay the ASD diagnosis in these children. The severely persistent group showed the most impairment in language and cognitive skills across time. Initially mild symptom levels predicted better language outcomes. More variability in trajectories was observed at the item level, suggesting that item trajectories do not necessarily follow the overall symptom trajectories. 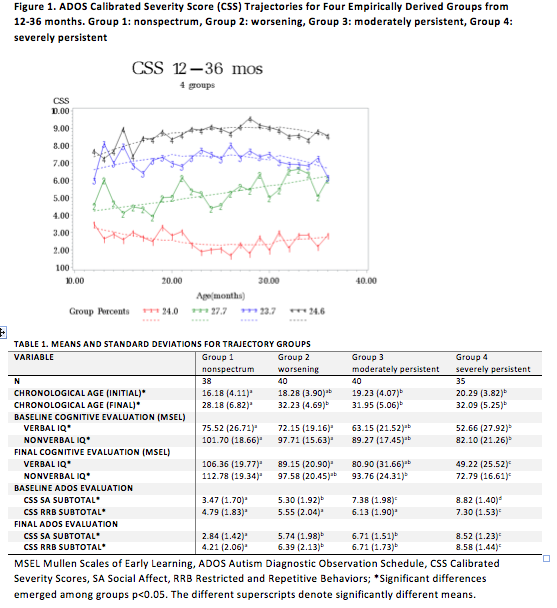