Golden Gate Ballroom (Marriott Marquis Hotel)
Y. Shen, H. Dong, J. Ou and J. Zhao, Institute of Mental Health, the Second Xiangya Hospital, Central South University, Changsha, China
Background:  Autism is a neurodevelopment disorder with unclear etiology. Some previous studies suggested that maternal pre-pregnancy body mass index (BMI) and gestational weight gain (GWG) might involve in the etiology of autism. However, the studies are still limited, and the findings need further replications. Furthermore, there are obvious ethnic disparities in BMI and GWG for the different genetic backgrounds, living environments and lifestyle. So it is necessary to validate in populations from different backgrounds.

Objectives:  The goal of this study is to explore the association between maternal pre-pregnancy BMI, GWG and the risk of autism in Han Chinese population.

After removing the outliers, Student’s t-test and Chi square test were adapted to compare the demographic characteristics, the maternal BMI and GWG between case and control groups. Then we conducted binary logistic regressions to calculate the Odds Ratio (OR) for the relationship between pre-pregnancy BMI, GWG and the occurrence of autism.

Conclusions:  To our knowledge, this is the largest scale study in Chinese Han population. Our present study reported that maternal pre-pregnancy BMI might not be associated with autism risk, but excessive GWG might increase offspring autism risk among normal weight and overweight mothers 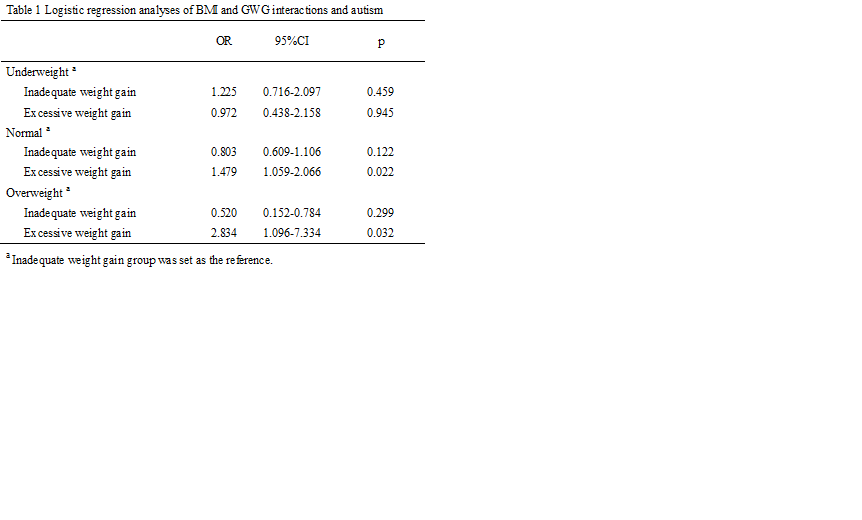