25156
Evaluation of Sleep Disruption in Adults with Neurodevelopmental Disorders

Objectives: This study aimed to identify the extent of sleep disturbances in a clinic sample of adults with ASD, ADHD, and both ASD and ADHD; and their relationship to symptom ratings. In addition, it examined the potential influence of symptoms of depression and anxiety on sleep patterns, as these symptoms are especially common in adults with ASD, and can also disrupt sleep.

Results: Overall, 91% of participants had "poor" sleep on the PSQI (total score 5+) and 44% had either "moderate" or "severe" insomnia on the ISI (score 15+). These high rates did not differ across the diagnostic groups (group comparison t-tests, all p>0.23). Insomnia scores across the entire cohort correlated with the HADS Anxiety score (r=0.477, p=0.001) but not the Depression rating (p=0.15). Insomnia scores also correlated with symptoms of hyperactivity (r=0.380, p=0.001), but not inattentive symptoms (p=0.15) and not with self-reported ASD symptoms (r=0.180, p=0.130). PSQI total score correlates were similar. Anxiety scores tended to be higher in those with ASD (p=0.055); whereas Barkley hyperactivity scores were significantly higher in those with ADHD (p=0.009).

Conclusions: This preliminary study indicates a high burden of sleep disturbances in adults with ASD, ADHD and comorbid ASD with ADHD. However the origins of these symptoms may be different in each condition, and this could have important implications for management. For example, it appears possible that anxiety is relatively more important in driving sleep problems in ASD, while hyperactivity is relatively more important in those with ADHD. Further work to characterize the causes of, and possible interventions for, sleep disorders in adults with neurodevelopmental conditions is therefore underway. 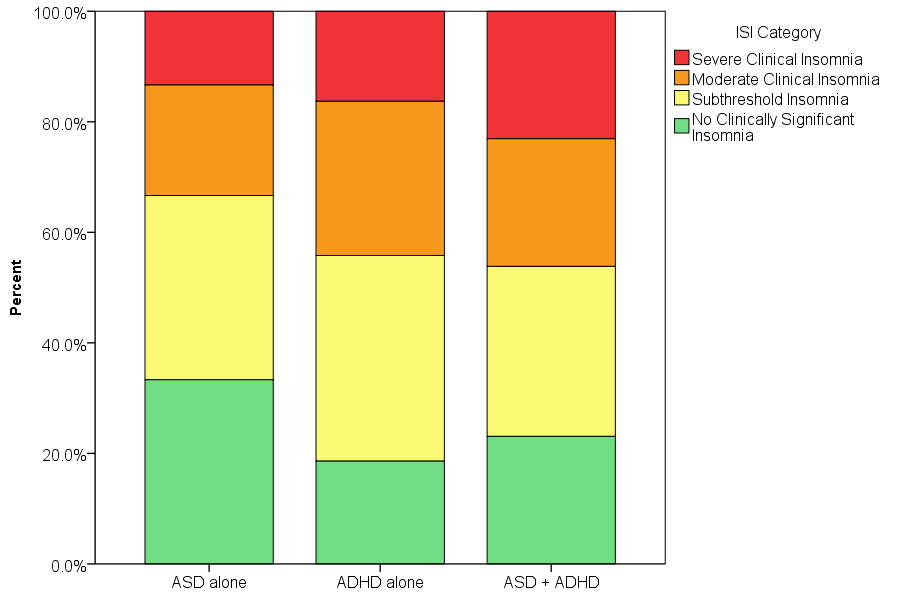