Objectives: The aim of this study is to examine potential differences in clinically identified (ADOS) RRB symptoms using a large sample of age and IQ-matched females and males with ASD.

Methods: Data were extracted from the Autism Speaks Autism Treatment Network (ATN) registry. The study sample included 513 females and 513 males with an ASD diagnosis (Autistic Disorder, Asperger’s Disorder) propensity score-matched 1:1 on age in 24mo intervals and IQ (≥70 vs. <70). Age (<6 yrs, 6-<12 yrs), race, ethnicity, IQ, caregiver education, evidence of lost skills, and autism diagnosis were tabulated overall and by sex. Fisher’s exact tests evaluated if these characteristics differ by sex. ADOS RRB domain calibrated severity score and its individual items were described overall and by sex in four age-IQ groups: 1. IQ≥70 and < 6 yrs, 2. IQ≥70 and 6-<12 yrs, 3. IQ<70 and <6 yrs, 4. IQ<70 and 6-<12 yrs. T-tests assessed whether RRB differs by sex within each of these groups. Means and standard deviations were reported. RRB individual item scores (1 or 2 vs. 0) were tabulated by sex, and Fisher’s exact tests determined if these items differ by sex.

Conclusions:  Findings from the largest dataset to date of matched young females and males with ASD indicate that there are sex differences in overall RRBs and in particular sub-domains for selected groups. These differences add to the growing literature regarding the need for sex-specific algorithms in autism diagnostic instruments which may then help improve our ability to identify misdiagnosed and under-diagnosed females with ASD. 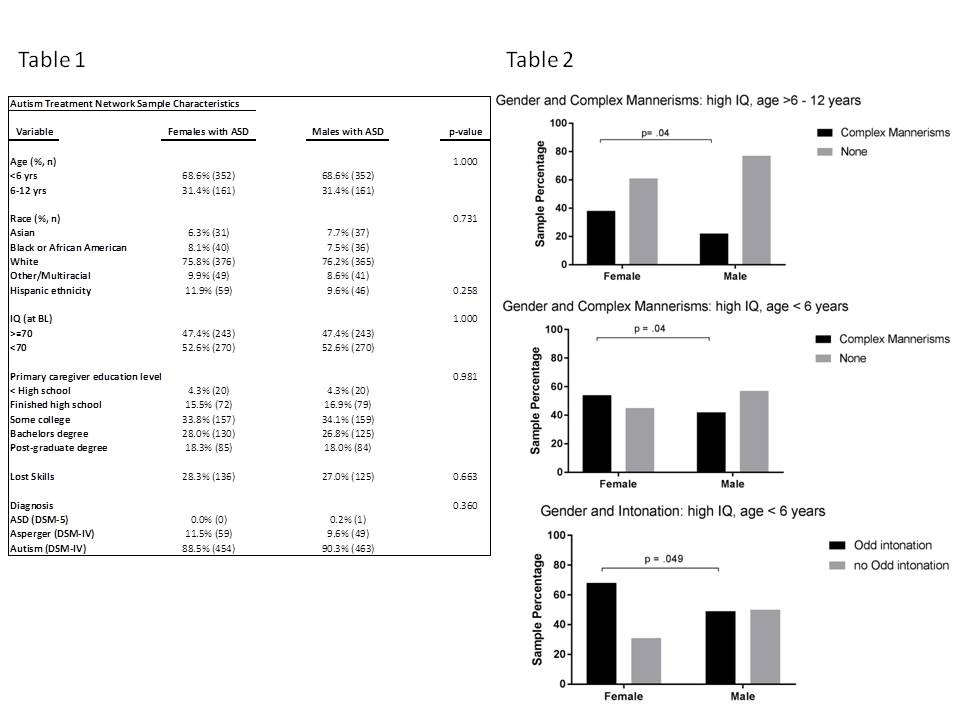