Autism spectrum disorder (ASD) and Social Anxiety Disorder (SAD) have partly overlapping symptoms. It is also increasingly acknowledged that both SAD and ASD can be understood as the extreme ends of continuous phenotypes. Elevated autistic traits are common in SAD, and people with ASD often have high levels of social anxiety. Studies relating symptom dimensions to cognitive mechanisms can therefore be informative about similarities and differences between the two conditions. Gaze avoidance has been linked to both SAD and ASD, but little is known about differences between the two conditions.

We examined the relationship between SAD and ASD symptoms and different stages of visual attention to human eyes.

Participants: 25 treatment-seeking adolescents diagnosed with Social Anxiety Disorder (21 female). Social anxiety levels and autistic traits were assessed dimensionally. All participants were diagnosed by an experienced clinical psychologist. Data was first analyzed in females only, and then in the full sample.

Stimuli consisted of images of human eyes among non-social distractors. Images were presented in horizontal arrays. The position of the eyes were counterbalanced across trials. Gaze was recorded with a corneal reflection eye tracker.

Controlling for social anxiety, elevated autistic traits were associated with delayed orienting to eyes presented among distractors (p < .05; see Figure 1A). In contrast, elevated social anxiety levels were associated with faster orienting away from the eyes, when controlling for autistic traits (p <.01; see Figure 1B). Both mechanisms typically operated within less than 1000 milliseconds.

We found evidence of independent contributions by two aspects of social attention – orienting to and orienting away from eyes, to autistic traits and SAD symptoms, respectively. With regards to ASD, this study suggests that autistic traits are related to a reduced bottom-up driven salience of human eyes. In contrast, social anxiety mainly had an effect at later stages of processing, possibly reflecting anxiety-driven avoidance. 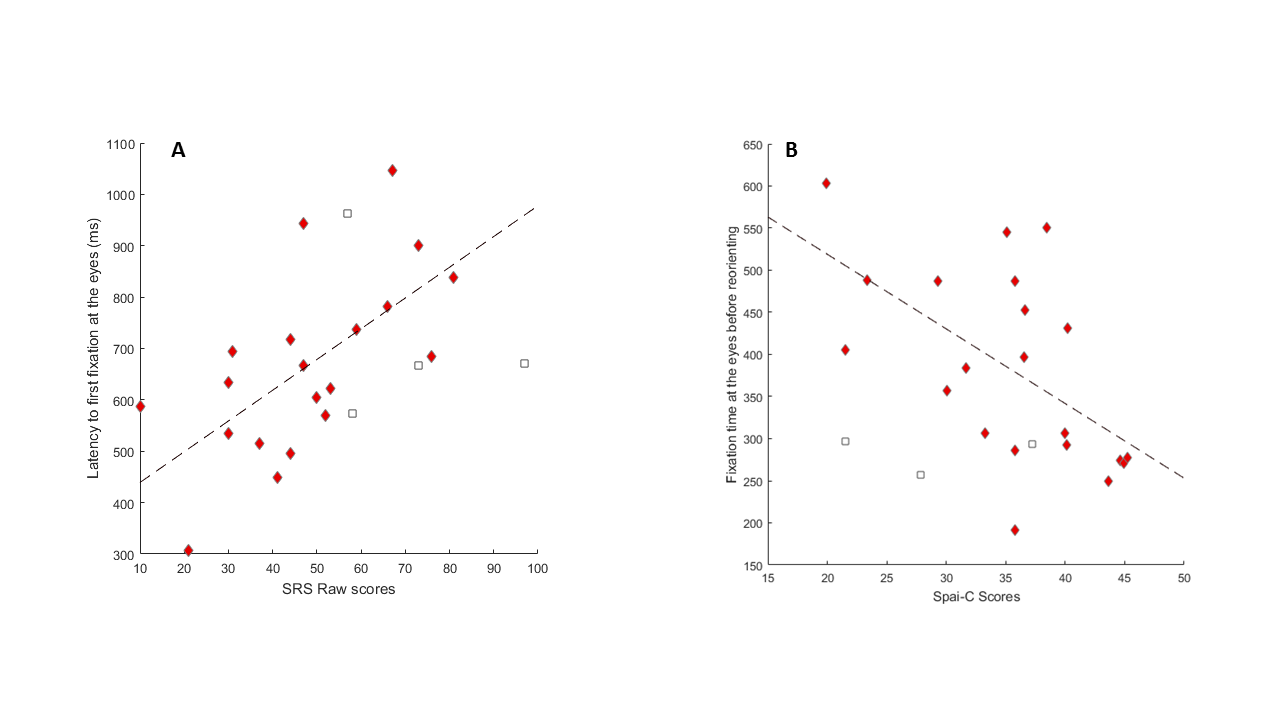