25280
Humor Responses and Social Referencing in Children with ASD: The Role of Social Cognitive Complexity

Methods: Participants were 43 children (28 male, mean age: 10.46 years; ASD N=20, TDC N=12, non-ASD mixed clinical or first-degree relative with ASD N=11; matched on age and sex ratio). Children watched two short videos that showed: 1) a baby laughing hysterically at a dog chasing bubbles (Figure 1a), and 2) a father giving his baby a lemon wedge to taste for the first time (Figure 1b). Children’s responses were coded for the presence or absence of smiling, laughing or giggling, speaking over the video, and social referencing (i.e., looking at the task administrator during the video to share affect or seek nonverbal information).

Results:   Smiling was the most frequently observed response, with 93% of participants exhibiting at least one smile during the videos. Nearly half of participants engaged in social referencing at least once (49%), while only about 30% laughed out loud or spoke during the video. We examined diagnostic group differences in the two most frequent responses (smiling and social referencing) via repeated measures ANOVA. A three-way interaction emerged between video (Bubbles, Lemon), response (Smiling, Social referencing), and diagnosis [ASD, non-ASD, TDC; F(2,40)=2.97, p=.06; Figure 2]. Planned t-tests revealed that fewer children with ASD smiled during the lemon video than the bubbles video, and more children with ASD engaged in social referencing during the lemon video than the bubbles video (ps<.05).

Conclusions: These preliminary data suggest that when videos depict more social-cognitive complexity, children with ASD smile less and engage in more social referencing. One explanation for this finding is that the lemon video is ambiguous, leading to greater uncertainty in how to respond. Whereas the baby’s laughter in the bubbles video provides a clear clue to the video’s intent, the lemon video requires perspective-taking; the viewer may smile in response to the father’s humorous tone, or sympathize with the baby’s disgust. To understand individual response patterns more fully, we will transcribe children’s verbal descriptions of the videos. Future studies will identify characteristics of the perceiver that predict humor responses to videos with varying levels of social-cognitive complexity. 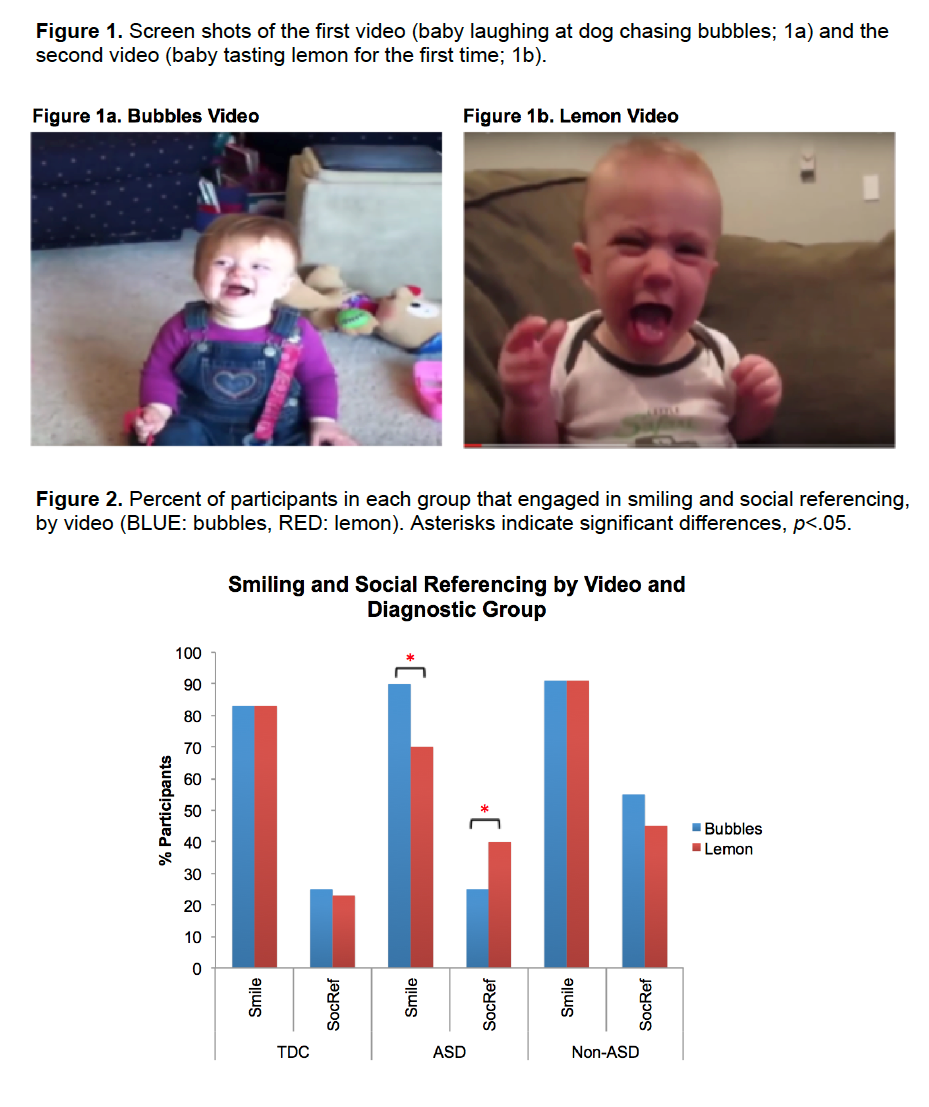