Golden Gate Ballroom (Marriott Marquis Hotel)
J. Douglas, L. Byrge, G. Lisandrelli and D. P. Kennedy, Psychological and Brain Sciences, Indiana University, Bloomington, IN
Background:  Traditional neuroimaging paradigms often do not fully reflect the richness and complexity of the natural world in which perceptual and cognitive processes are deployed. Recent interest in improving the ecological validity of neuroimaging research has prompted the creation of alternative naturalistic paradigms and stimuli. The use of multimodal, free-flowing stimuli with varying content can allow researchers to probe multiple constructs of interest, and interactions among them, concurrently. Naturalistic or semi-naturalistic approaches can prove especially beneficial to research on autism spectrum disorder (ASD), as these approaches most closely approximate the conditions under which impairments associated with the disorder manifest.

Objectives:  To explore the use of unconstrained dynamic video stimuli within a free-viewing fMRI paradigm to examine neural responses to multiple perceptual and cognitive processes concurrently, and to extend this approach to the study of ASD.

Methods:  53 participants (24 individuals with ASD and 29 neurotypical individuals) passively viewed videos (each lasting approximately fifteen minutes) over four runs while lying in an fMRI scanner. The videos were composed of movie trailers spanning multiple genres. Using ELAN and MATLAB, we defined several events of interest, including instances of humans or human faces appearing onscreen, human speech, social interaction between two or more people, low-level changes in luminance, and inter-trailer intervals during which a stimulus was not presented. We conducted separate regression analyses using FSL with each such event type as a regressor in the model. Our primary analyses assessed both the neural specificity for each event type and the reliability of the response estimates obtained for each event type across the four functional runs. We also conducted group-level analyses for each of the event types, thereby quantifying similarities and differences between neurotypical individuals and individuals with ASD.

Results:  Each event type produced a largely distinct pattern of activity in the canonical neural networks that have been identified in previous research using more conventional paradigms. Activation patterns showed a high degree of reliability across the four functional runs, suggesting that individuals reliably engaged in event-level processing that was independent of the idiosyncratic aspects of the videos. Finally, while we observed some small differences in the responses from participants with and without ASD, the groups displayed remarkable similarity overall across the different event types.

Conclusions:  Our findings support the feasibility and efficiency of using complex, dynamic stimuli in neuroimaging studies of ASD. The video stimuli elicited robust activation in the brain regions purported to process the classes of events examined. Additionally, our approach allowed for simultaneous exploration of a number of event types and associated neural networks within a single experiment. The similar response profiles among participants with and without ASD suggest that the ability to spontaneously process specific inputs is largely preserved in ASD and that more pronounced differences might be revealed in paradigms with a social interaction component. 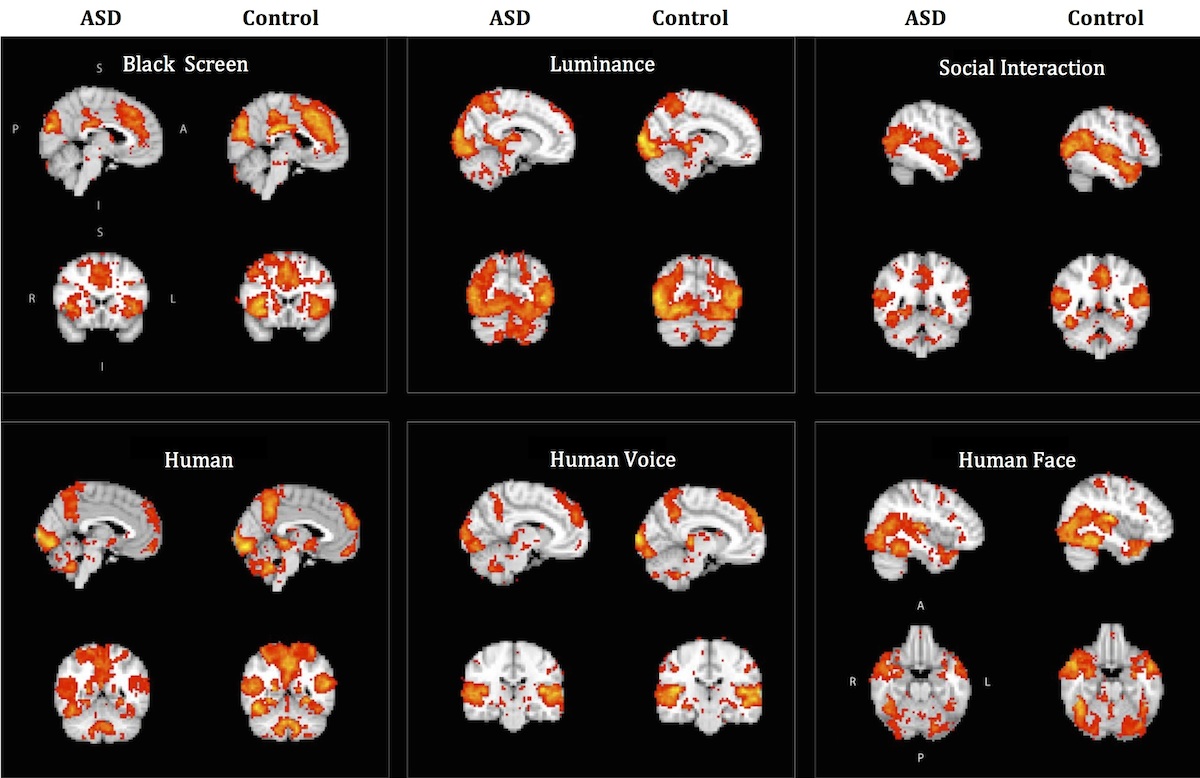