25335
Results of a RCT on a Transition Support Program for Adults with ASD: Effects on Quality of Life and Self-Determination

There is a dearth of evidence-based services for people with autism spectrum disorders (ASD) as they transition into adulthood (Spain & Blainly, 2015). This often leads to poor outcomes with respect to independent living, vocational and community engagement (e.g., Howlin et al., 2004; Roux et al., 2015). Currently, the only RCTs on a comprehensive intervention for young adults with ASD evaluate the UCLA PEERS model (Gantman et al., 2012; Laugeson, et al., 2015; Van Hecke et al., 2016). However, PEERS requires caregiver involvement and assistance, which is not available to all adults with ASD, nor does it foster much needed independence (Hume et al., 2014).

We developed a manualized curriculum for a transition service for young adults with ASD (without Intellectual Disability). Instead of targeting predetermined skills, we empowered participants to identify skills they wanted to develop, a practice supported in the disability literature (Wehman et al., 2014). We surveyed participants’ needs in three areas critical for successful adult transition: social communication, self-determination and working with others. Curriculum for each small group session reflected those participants’ self-expressed needs. To evaluate the efficacy of this program we conducted an RCT with a delayed intervention control group, focusing on Quality of Life and Self-Determination outcomes (ClinicalTrials.gov:NCT02439671).

Groups of 4 to 6 participants with ASD and 2 facilitators met for weekly for 2 hours over 10 weeks. Pre- and post- assessments were conducted within 4-6 weeks of the intervention by assessors blind to group status. Community diagnoses of ASD were confirmed with the ADOS-2. RCT analysis: 34 participants (aged 18 – 29) were randomized to immediate or delayed intervention. Groups did not differ on key demographic variables, nor baseline scores on Quality of Life (QoL-Q; Schalock & Keith, 1993) and Self-Determination (SDS; Wehmeyer & Kelchner, 1995) measures. Pre-post analysis:19 participants and 8 caregivers completed ratings of communication, self-determination, and working with others skills before and after intervention.

This is the first intervention study for adults with ASD targeting QoL and SD outcomes. Results show that in addition to improving skills focused on in the curriculum, important gains were made in QoL and SD during the intervention relative to control. 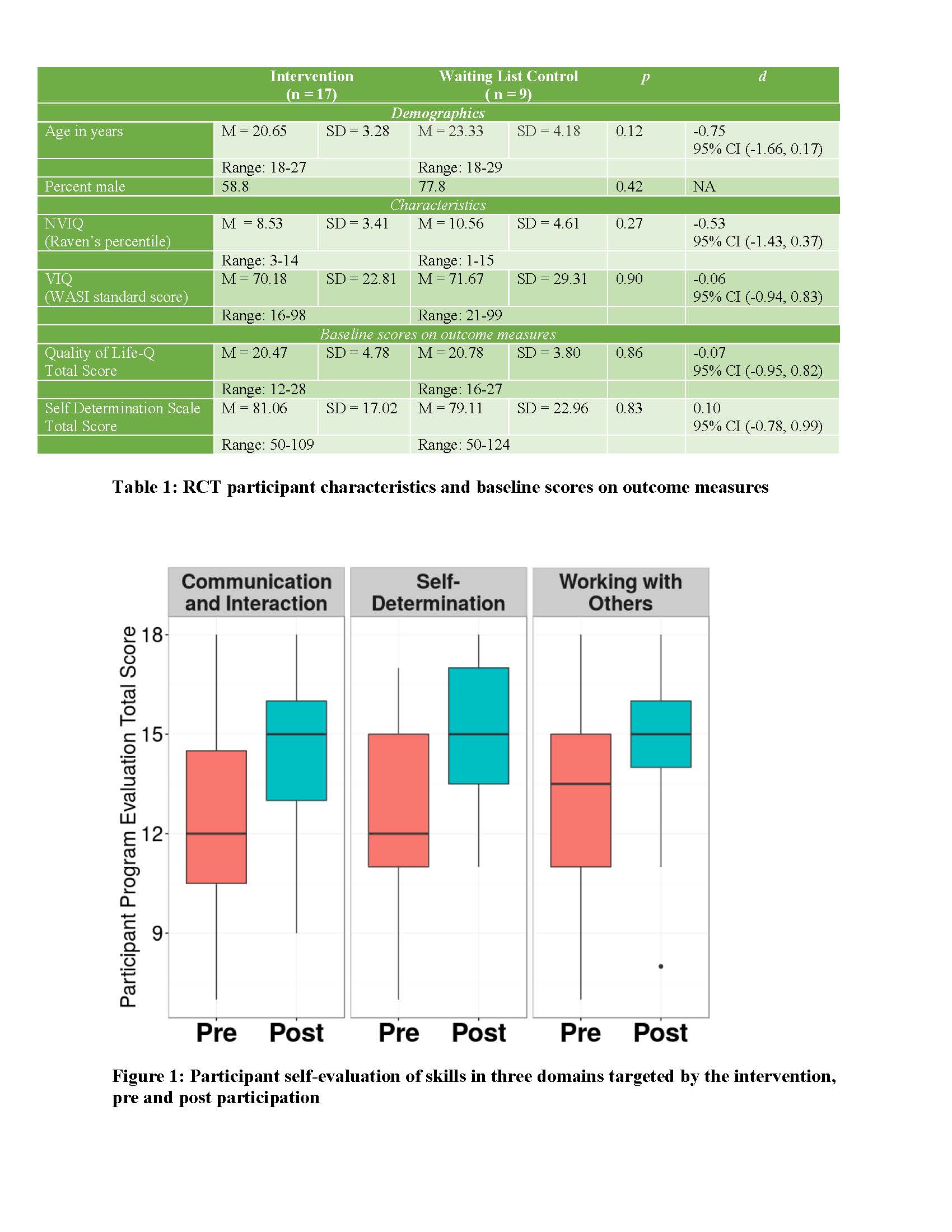