Attachment security, assessed between 12-15 months using the gold-standard Strange Situation Procedure (SSP), is an index of early social-emotional functioning. Autism spectrum disorder (ASD) involves impairments in social-emotional functioning, including difficulties forming and maintaining relationships. Researchers have found that children with ASD are less likely to have secure attachments to their parent (Rutgers et al., 2004), largely using modified versions of the SSP at later ages and retrospectively after a child is diagnosed. Few studies have examined attachment security prospectively in infant siblings of children with ASD using the original SSP. In a previous study of infant siblings of children with ASD, we found that these high-risk infant siblings were not more likely to evince insecure attachment to their parent than infant siblings of typically-developing children (Haltigan et al., 2011).

To determine whether attachment security at 15 months differs by later diagnostic outcome at 36 months (ASD or no ASD diagnosis).

Infant-parent dyads (n=95) completed the SSP at 15 months. Infants were reliably classified by expert raters as secure (n=72), avoidant (n=10), or resistant (n=13). Attachment was also examined as a continuous score along two dimensions: approach/avoidance behaviors and resistance/disorganization behaviors (Spieker & Fraley, 2003). The sample included infants without (low-risk) and with (high-risk) an older sibling with ASD. At 36 months, a diagnosis of ASD was determined for low- and high-risk children by an experienced clinician informed by the Autism Diagnostic Observation Schedule. We assessed differences in attachment security in low-risk children (Low-Risk/No-ASD, n=39), high-risk children with no ASD diagnosis (High-Risk/No-ASD, n=40) and high-risk children with an ASD diagnosis (High-Risk/ASD, n=16).

Using a prospective design, we found that high-risk infant siblings who are later diagnosed with ASD are able to form attachment relationships with their caregivers, but are more likely to display insecure attachment patterns compared to children without ASD. High-Risk/ASD infants exhibited more resistant and disorganized strategies when interacting with their parents. These prospective findings suggest that half of infants who go on to develop ASD have early social difficulties that interfere with their ability to establish a secure attachment with their caregiver. Alternatively, the increased resistant/disorganized scores in the ASD group may be indicative of underlying neurological impairment rather than an indicator of a problematic attachment relationship (Pipp-Siegel et al., 1999). It is also possible that High-Risk/ASD infants, because of temperamental variables or the early emergence of ASD symptoms, may tax caregivers’ ability to be sensitively responsive to their infants. 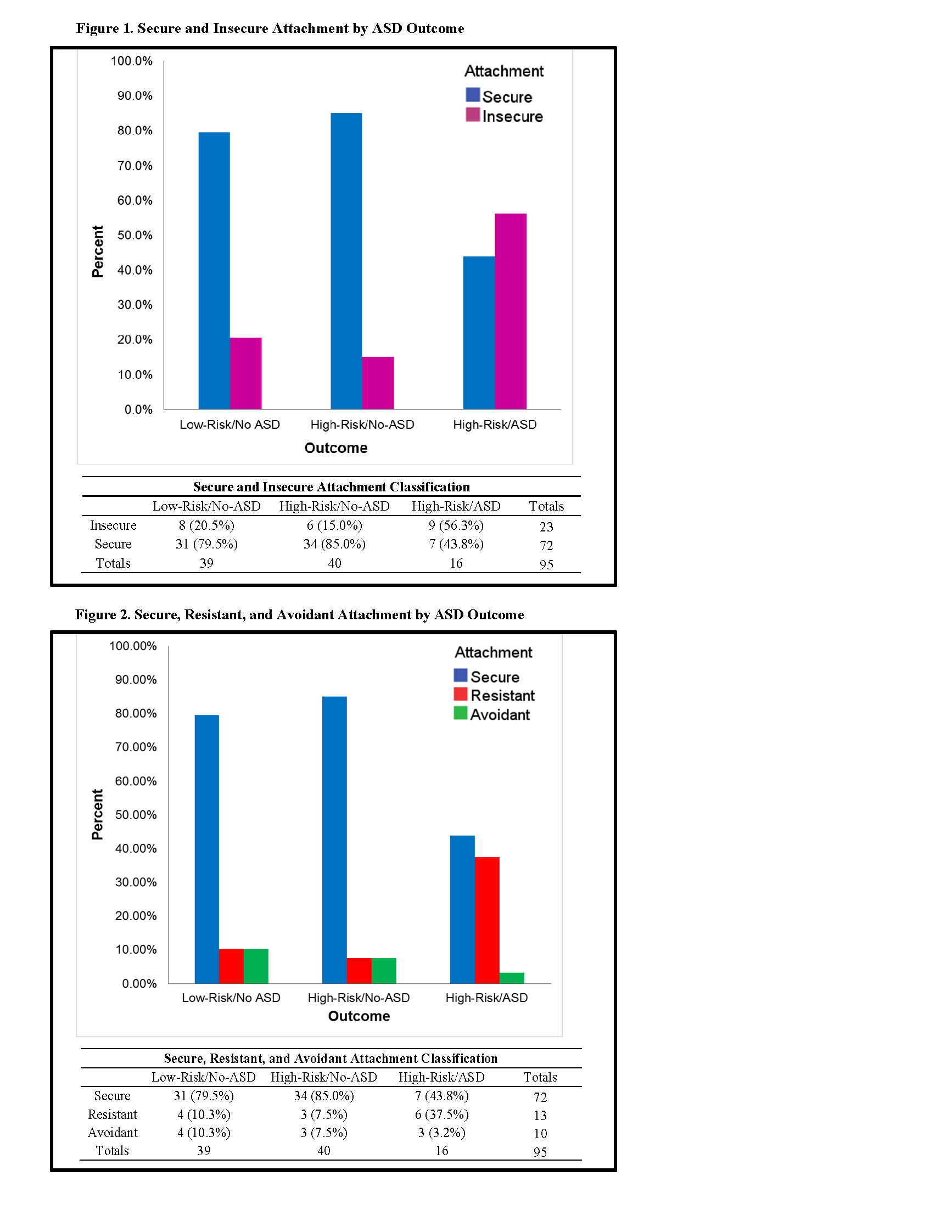