25548
Sex and IQ As Predictors of Sensory Patterns in ASD

Females are underrepresented in ASD, which is possibly influenced by the male-bias in the population. Furthermore, females are diagnosed at a later age preventing them from accessing essential services at earlier stages of development. Little is known about the underlying differences in ASD symptoms between females and males, specifically the manifestation of sensory response patterns. These sensory responses, including hypo-responsiveness (HYPO), hyper-responsiveness (HYPER), and seeking behaviors (SEEK) impact the child’s language, adaptive skills, and overall quality of life. Additionally, recent findings suggest that IQ is negatively correlated with increased sensory responses. Previous studies of sensory responses in children with ASD have not included a sufficient number of females to adequately examine potential sex differences.

This study aims to examine sex and IQ as predictors of sensory response patterns in children with ASD.

This study used extant data from a large longitudinal study. Caregivers of children with ASD aged 2-12 years old (n=1307) participated in a national online survey examining longitudinal outcomes of sensory behaviors. The national survey study collected data at two time points, but only time point 1 data were analyzed in the current study. The survey included a background questionnaire (including parent report of cognitive functioning converted to a proxy IQ; IQP) and the Sensory Experiences Questionnaire (SEQ.v3). Only children that had a reported IQP were included in the analysis (females n=196 and males n =929). A regression model was employed to examine sex and IQP as predictors of sensory patterns.

Sex was found to be a significant predictor of HYPO (p < .025) and SEEK (p < .048), but not HYPER (p < .40). Moreover, there was an interaction between sex and IQP (p <.015) indicating that females with lower IQP scored higher on HYPO behaviors than males at the same level of IQP. However, with higher IQP levels, males scored higher on HYPO behaviors than females. A similar pattern was found with SEEK (p <.010) where females with lower IQP had more seeking behaviors than males, but as IQP increased, males scored higher on SEEK behaviors in comparison to females. IQP had a significant correlation with HYPER (p < .025), indicating that children with higher IQP show more sensory hyper-responsiveness, but sex was not significantly associated with HYPER.

This novel study investigated sex differences in sensory response patterns in children with ASD. These results provide important insight on understanding sensory behaviors in females across different levels of IQP, suggesting that females with lower IQP tend to have more HYPO and/or SEEK behaviors than their counterpart males. In contrast, females with higher IQP show less HYPO and/or SEEK than males with comparable IQP. These findings have implications for diagnosis and intervention that reflect the unique sensory differences between the sexes. 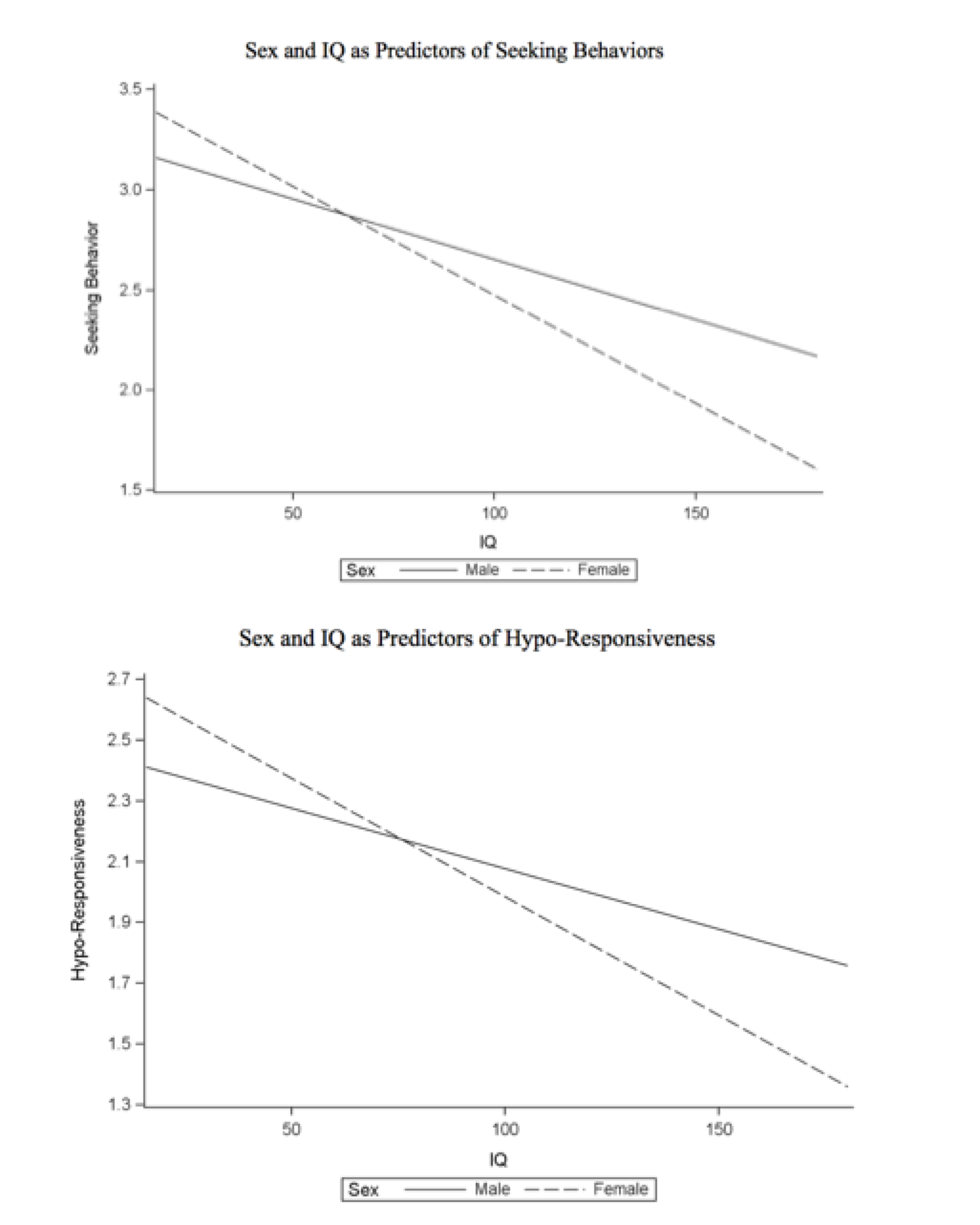