Objectives: This study compared these two developmental models, Social Motivation and Attention theories, in a community-based sample of infants who screened positive on an autism screening inventory and were followed into early childhood.

Methods: Participants included 43 children identified at high-risk for a later diagnosis of ASD based on the First Year Inventory (FYI) community screening at 12 months of age. Toddlers were evaluated at 13 (Time 1) and 22 months (Time 2). A third evaluation was conducted during early childhood (age 3-5 years) to determine diagnostic outcome using the Autism Diagnostic Observation Scale, parent interview, and clinical judgment. Thirteen children were diagnosed with ASD and 30 children did not meet criteria for ASD at Time 3.

Video coding for social motivation (looking at people) and “sticky” attention (shifting of attention and RRBs) was completed using the Communication and Symbolic Behavior Scales (CSBS) at 13 and 22 months. Social motivation was defined as the proportion of time the child spent clearly looking at a person. An attention shift was identified when children disengaged their attention from a stimulus, shifted their gaze, and immediately re-engaged their attention with another stimulus. RRBs were measured using the CSBS RSM scale (Wetherby & Morgan, 2007). Group means are displayed in Table 1. 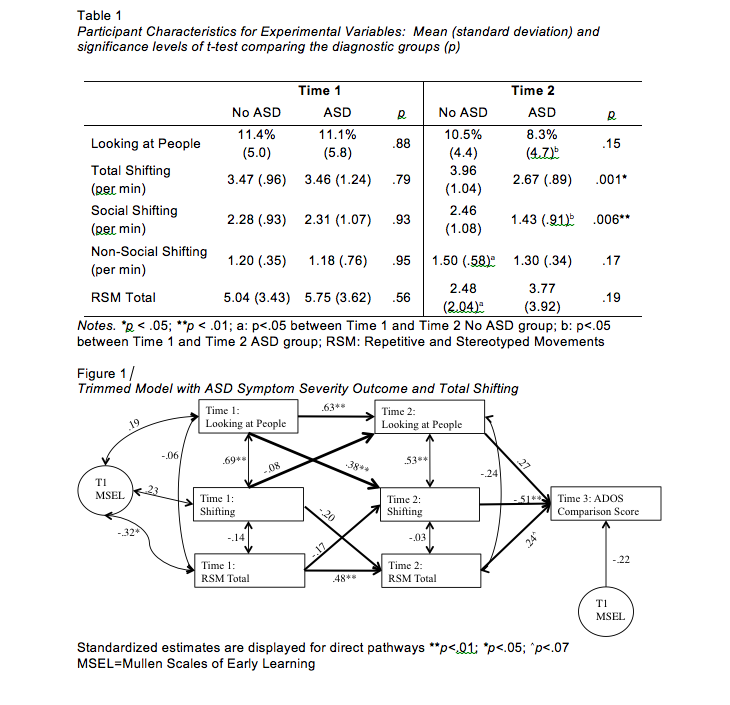