Comorbid psychiatric disorders occur at elevated rates in individuals with Autism Spectrum Disorders (ASD). In particular, assessments reveal that anxiety and ADHD symptoms frequently exist in the ASD population. A meta-analysis found an anxiety rate of 39.6% in children with ASD (van Steensel et al. 2011). Emotions and behaviors associated with psychiatric problems exacerbate impairments that individuals with ASD face, and increased anxiety relates to suboptimal outcomes in adults. The classroom presents a real-world scenario to assess outcomes in children. A recent school study indicated that social anxiety predicts poor outcome related to cognitive ability (Pellecchia et al. 2016). Further analysis of the relationship between anxiety and classroom performance will provide insight into the factors that contribute to outcome in youth with ASD. Exploring the specificity of the effect to ASD relative to other developmental disorders is also relevant. This study thus included an ADHD group as a comparative sample.

To determine whether anxiety symptoms in children with ASD relate to teacher-reported classroom performance after accounting for sex, IQ, ASD, and ADHD symptoms, and to explore the specificity of the effect to ASD.

Children with ASD (N=36) or ADHD (N=88) participated in a randomized comparative study of two school-based intervention programs. Parents completed the Child Behavior Checklist (CBCL, Achenbach & Rescorla, 2001) as a baseline measure of emotional and behavioral characteristics. Teachers reported classroom performance using the Swanson, Kotkin, Agler, M-Flynn, and Pelham Scale, which includes 11 standard items that are rated on a 7 point scale (SKAMP, Swanson, 1992). The relationship between parent-reported anxiety and classroom behavior was analyzed using a linear regression model. CBCL Anxiety Problems and Attention Deficit/Hyperactivity Problems t-scores were used as measures of anxiety and ADHD symptoms. After first controlling for the effects of sex, IQ, and ASD symptoms alone and subsequently accounting for ADHD comorbidity, the model measured the effect of anxiety on the total SKAMP scores in the ASD group. A similar analysis accounting for sex, IQ, and ADHD symptoms was repeated for the ADHD group.

After controlling for the effects of sex, IQ, and ASD symptoms, anxiety was significantly related to SKAMP scores in individuals with ASD (β=.473, p=.009) and accounted for 21.2% of the variance. The effect remained when ADHD symptoms were incorporated into the model (β=.398, p=.041). After accounting for sex, IQ, and ADHD symptoms, this pattern was not observed in the ADHD group (β=-.201, p=.139). Given these findings, Pearson correlations between individual SKAMP items were explored. Significant associations were found in the ASD group related to starting assignments, sticking with tasks or activities, attending to activities or discussions, and completing assignments (Table 2; all r>.414, p<0.012).

The analysis suggests that parent-related anxiety relates to teacher-reported classroom performance in children with ASD after accounting for sex, IQ, and ASD symptoms. This association was not observed in the ADHD group. The knowledge that anxiety contributes to aspects of classroom outcome, such as completing assignments, underscores the importance of recognizing and treating anxiety in children with autism. 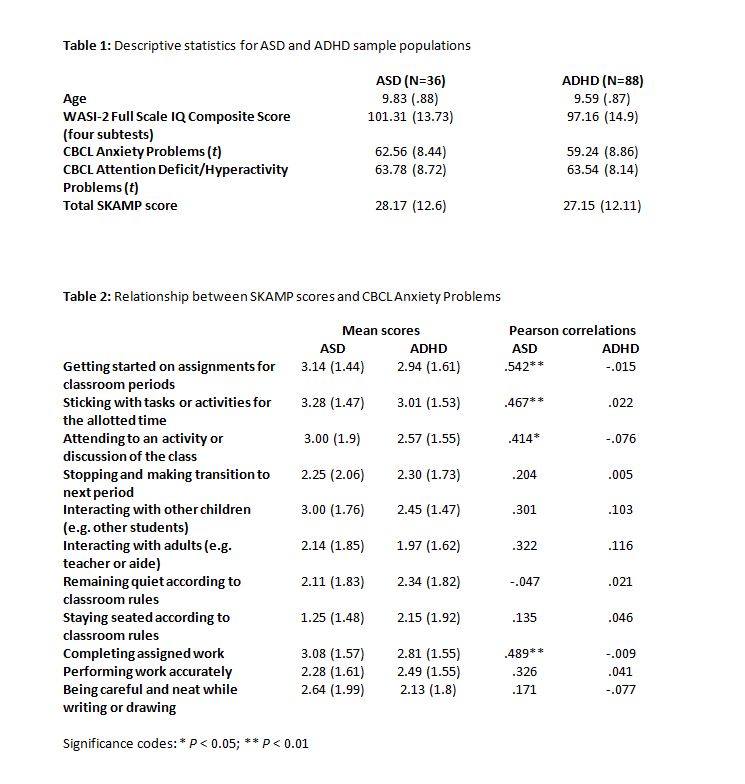