Golden Gate Ballroom (Marriott Marquis Hotel)
M. Sharda1, N. E. Foster1, K. Jamey1, C. Tuerk1, R. Chowdhury1, E. Germain1, A. Nadig2 and K. L. Hyde1,2, (1)University of Montreal, Montreal, QC, Canada, (2)Faculty of Medicine, McGill University, Montreal, QC, Canada
Background: Children with Autism Spectrum Disorder (ASD) have been shown to demonstrate differences in behavioural and neural processing of speech, but they also show intact music and song processing (Lai et al., 2012). However, the degree to which music and speech share neural resources is currently unclear, limiting the use of music for neuro-rehabilitation. The “speech-to-song illusion” (Deutsch et al., 2011), in which acoustically identical stimuli may be perceived as speech or song through repetition of a spoken phrase, offers a novel approach to investigate the overlap between speech and music. This work can guide auditory-based interventions in ASD.

Objectives: The aims of the current study were to investigate 1) whether children with ASD and typically developing (TD) children perceive the “speech-to-song illusion” similar to TD adults, and 2) the neural correlates of this illusion in both ASD and TD.

Methods:  Participants were 20 children with ASD aged 7-13 years and 21 TD children that were matched on age- and nonverbal IQ. ASD participants were diagnosed using the ADOS. All participants were tested on a speech-to-song illusion task that was previously validated in TD adults (Tierney et al., 2011). Stimuli were 40 spoken phrases, 20 that sounded like song when removed from context and repeated (Song), and 20 that did not (Speech). Additionally, 20 Scrambled phrases were used as an acoustic control. Participants performed a passive-listening task in a 3T MRI scanner. Stimuli were presented in eighty blocks of 16s each, where one phrase was repeated with a 0.5s interval. Speech, Song, Scrambled and Silence blocks were presented in random order. 480 whole-brain functional volumes (TR=2.57s) and a high-resolution anatomical T1, were acquired for all participants and analysed using SPM8. Following the scan, participants completed a behavioural task where they rated the same stimuli used in the functional task on a “songness” scale of 1 (Speech-like) to 5 (Song-like).

Conclusions: These results show that both ASD and TD children perceive the “speech-to-song illusion”, similar to TD adults. Interestingly, the neural correlates underlying the perception of stimuli as song or speech are distinct in both groups. Further investigation of brain activity underlying these stimuli as a function of perceptual ratings will provide insight into individual differences in speech and song processing in ASD. The behavioural validity of this task offers a novel, powerful tool to investigate the neural overlap between speech and music. This may provide a basis for the use of music-based therapies to improve speech and language in individuals with ASD. 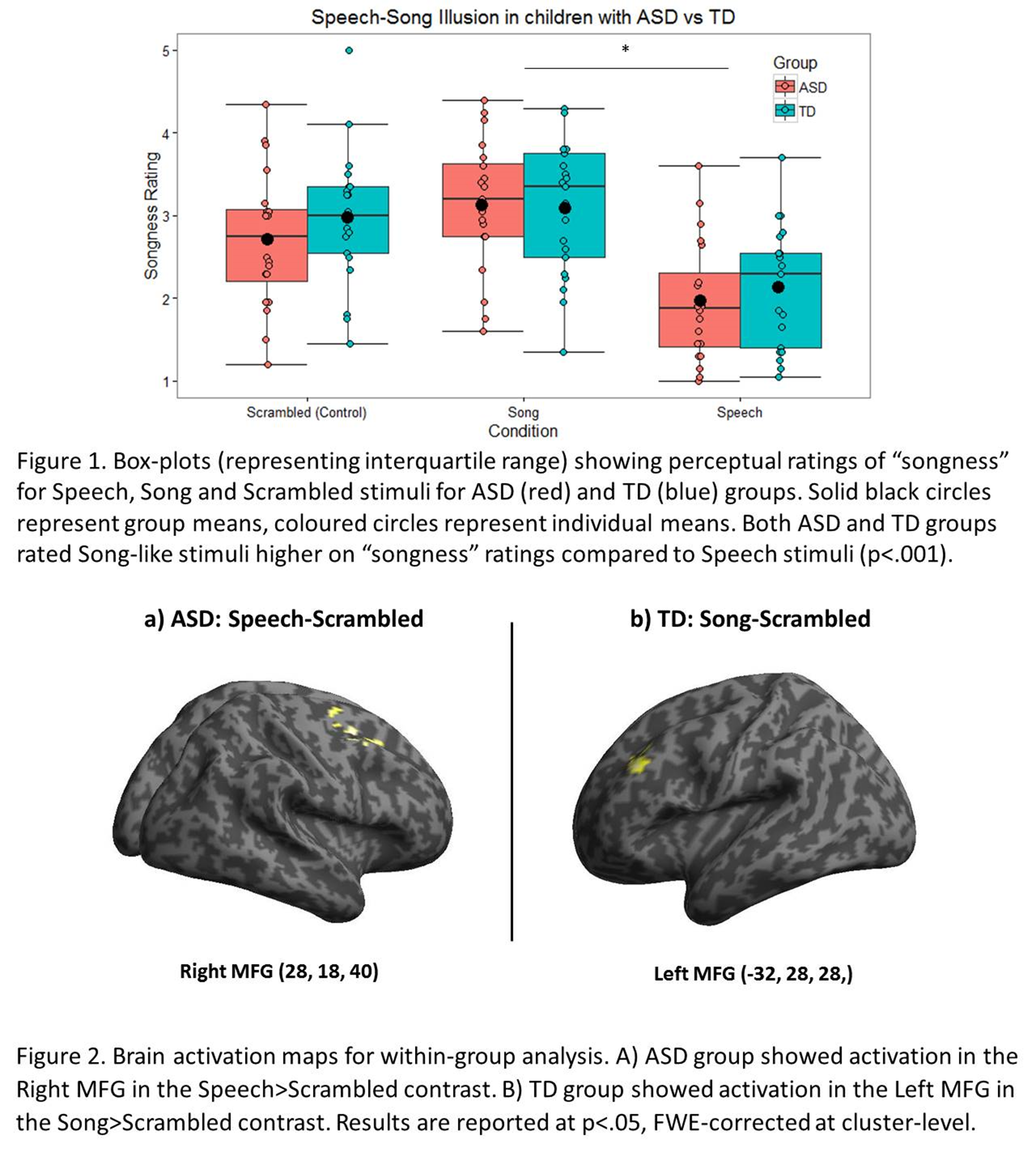