These mixed findings may be due to the different social settings within which facial expressions are monitored (Rinn, 1984; Namba et al., 2016). We hypothesize that modulation of facial expressions based on social context is impaired in ASD.

Objectives:  To investigate spontaneous expressions in a context designed to be relatively free of social demands.

Methods:  We presented four minutes of YouTube clips to twenty adolescents with ASD (ages 10 - 17, 3 females) and twenty TD adolescents (ages 10 - 16, 7 females) who were not significantly different on IQ (ASD M = 115, TD M= 109), age, and gender. We told participants that they should watch these clips to keep themselves entertained while the researchers set up the next study. Researchers remained in the room but were hidden by a partition, so that participants watched the videos without a social partner.

We coded video-recordings of participants watching the YouTube clips for facial responsiveness (“High”, “Low”, or “None”) based on the intensity and variety of facial expressions. We also coded for laughter and vocalizations (e.g., “Gross!”, “Eww!”).

Conclusions:  During (pseudo)-solitary video-watching, adolescents with ASD produced a greater variety and intensity of facial and vocal expressions than TD peers. In fact, all “flat” and “emotionless” participants were TD. They may have suppressed their expressions because the RA was still present in the room (Robbins & Vandree, 2009). Also, TD participants may not have amplified their expressions because of the lack of social reciprocity of the situation (Rinn, 1984; Chapman, 1973; Robbins & Vandree, 2009).

The fact that the ASD group was so much more expressive was unexpected. Perhaps, once they were “alone,” they felt unencumbered by social pressures, and reacted spontaneously to the videos. But it is also possible that the ASD group interpreted the social context of the experiment differently from their TD peers. Although the RAs couldn’t see the videos from behind the partition, participants with ASD may still have considered them social partners and used their exaggerated expressions, comments and laughter as social overtures. This study sheds light on the impact of perceived social context on the facial and vocal expressions of adolescents with ASD. 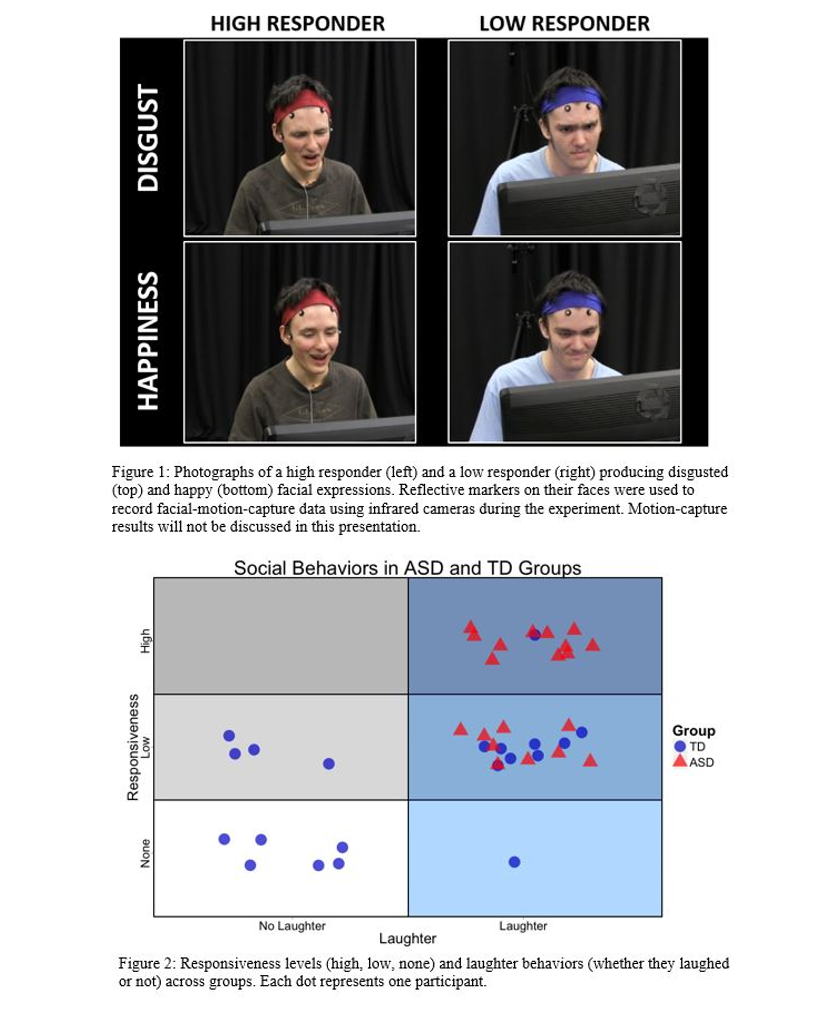