Little is known about decision-making in autism spectrum disorder (ASD), despite its potential impact on functioning. Decision-making under ambiguity can be investigated using the Iowa Gambling Task (IGT), where learning is implicit. Studies have shown impaired performance on the IGT in ASD (Mussey et al., 2015; Zhang et al., 2015), although South et al. (2014) observed enhanced performance. A modified version of the IGT (mIGT), which eliminates the potential confound of differences in exploratory behavior, and allows for separation of approach (choosing to “play” a good deck) and avoidance (choosing to “pass” on a bad deck) behavior, has been developed but has not yet been used in ASD (Cauffman et al., 2010). Decision-making under risk can be assessed using the Game of Dice Task (GDT), where outcomes are unambiguous and explicit. Zhang et al. (2015) found impaired performance and suboptimal use of trial feedback in ASD.

TYP performance on IGT was positively correlated with NIH Toolbox Cognitive Function Composite Score (Figure 2a). In ASD, there was an association between anxiety and obsessive compulsive symptoms and poorer IGT performance (Figure 2b, c).

Participants with ASD show impairments in decision making under risk (GDT) and ambiguity (mIGT). Decision making is related to cognitive functioning in TYP and anxiety and compulsive symptoms in ASD. Data collection is ongoing, and age groups effects analyses will assess development of decision-making processes throughout adolescence and young adulthood and their relationship to adaptive functioning. 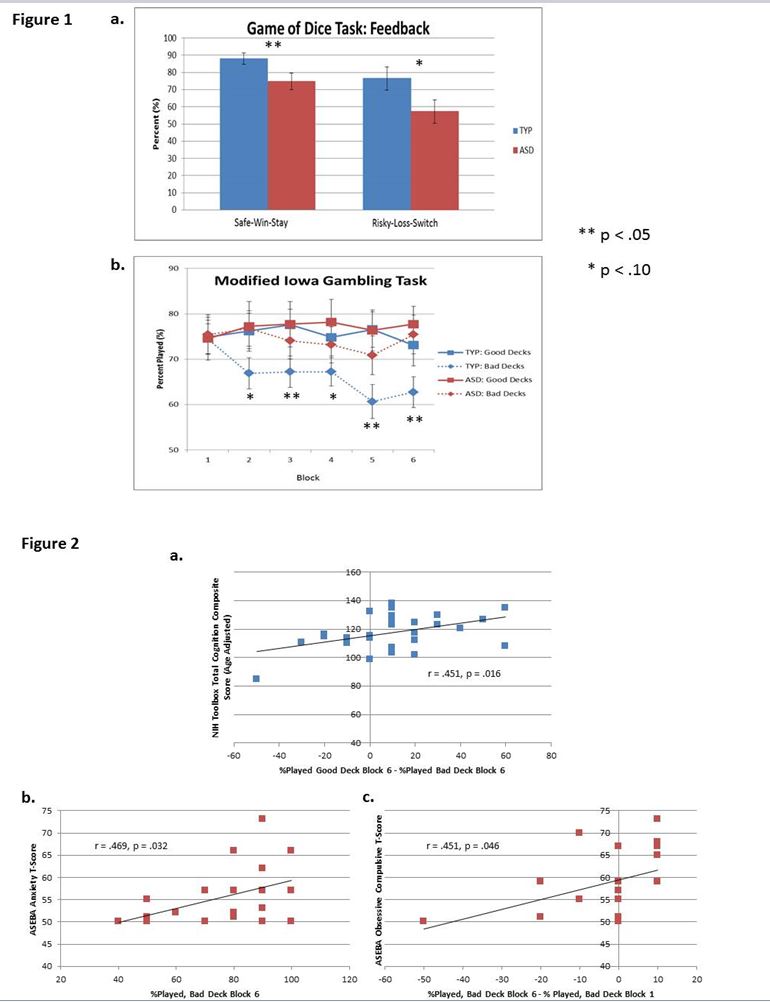