Golden Gate Ballroom (Marriott Marquis Hotel)
E. Hilton1, P. Heymann2, S. Macari2, A. Milgramm2, F. E. Kane-Grade3 and K. Chawarska2, (1)Yale Child Study Center, New Haven, CT, (2)Child Study Center, Yale University School of Medicine, New Haven, CT, (3)Yale child Study Center, New Haven, CT
Background: Previous research indicates that the ratio of autism spectrum disorder (ASD) in males to females is 4.3:1 across the full range of intellectual functioning and is even more skewed, 5.5:1, in individuals without comorbid intellectual disability (Fombonne, 2005). Females with similar levels of autism symptomatology as their male counterparts are less likely to receive an ASD diagnosis (Dworzynski et al., 2012). Explanations of this gender disparity include hypotheses about the roles of genetic and biological factors, but their empirical support is inconsistent (Kreiser & White, 2014). Recent work has discussed a potential bias in our conceptualization of ASD as consistent with the symptom profile common in males, while females with ASD may have a different constellation of symptoms. Therefore, further investigation of the bias of the “male autism phenotype” is warranted (Robinson et al, 2013). Symbolic play (i.e. use of imagination to pretend that an object is something else) has previously been implicated in ASD (Lam & Yeung, 2012). However, gender differences in symbolic play in infants and toddlers at high and low risk for ASD have not been sufficiently explored.

Objectives: To examine symbolic play skills in male and female infants and toddlers between 12 and 24 months who are at high risk (HR) and low risk (LR) for developing ASD.

Conclusions: This study is unique in longitudinally investigating play in infants as young as 12 months and found that females across all ages with both high and low ASD symptom severity showed significantly stronger symbolic play skills than males. Stronger play abilities in females, regardless of ASD symptomatology, may be a factor in the clinical presentation of females with increased autism symptoms. In other words, play skills appear to be relatively preserved in females with elevated ASD symptoms. Future studies should examine the possibility that intact play skills are part of a female autism phenotype. 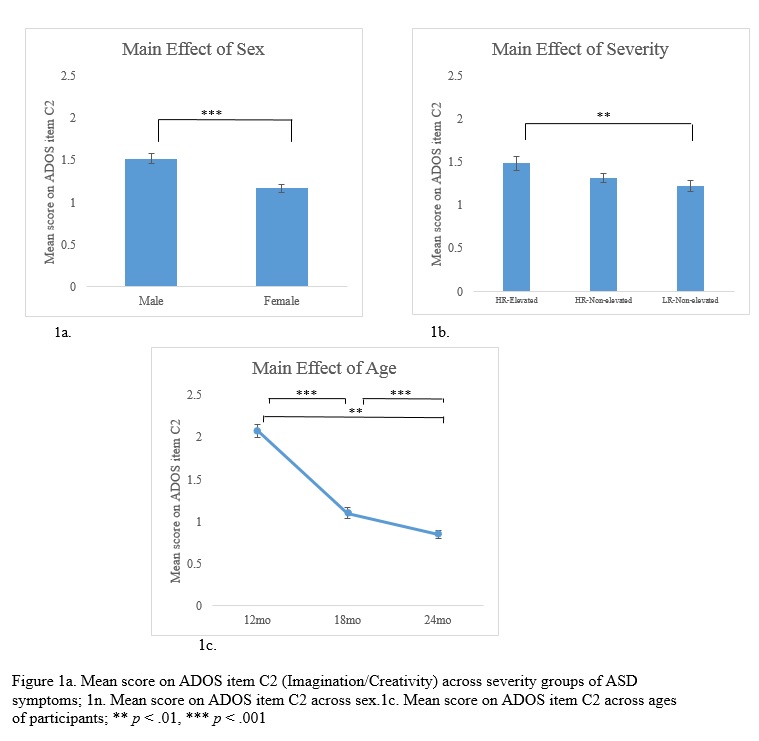