25763
Patterns of Face Gaze Among Infants at Risk for ASD

Objectives: To investigate patterns of face gaze directed at an experimenter using a novel interactive procedure at 6, 9, and 12 months among HR siblings who later develop ASD (HR-ASD), HR siblings who do not receive an ASD diagnosis (HR-nASD), and typically developing low-risk children (LR-TD).

Methods: Participants included 184 infants (HR-ASD, n=21; HR-nASD, n=104; LR-TD, n=59) who completed Social Orienting Probes at 6, 9, and 12 months and were evaluated for ASD at 24 and 36 months. Trained examiners administered a series of 1-minute probes designed to elicit attention through several means: a) motherese, b) song, and c) peek-a-boo. Videotaped sessions were coded offline by blinded coders for the duration of time, in seconds, that the infant looked at the examiner’s face. Face gaze was calculated as the proportion of time spent looking at the examiner’s face during each probe (%Face). Generalized linear mixed model analyses were used to examine the fixed effects of diagnostic group, probe, infant age, and their interactions on %Face, followed by planned contrasts using the sequential Bonferroni correction.

Conclusions: Results of these analyses diverge from previous literature by revealing differences in infants’ face gaze at 6 months, but not at 9 or 12, between HR-infants who are later diagnosed with ASD, unaffected HR-siblings, and LR-TD children during a standardized behavioral paradigm. The finding that ASD infants spend less time orienting to the face of an interactive partner contributes to evidence from neuroimaging (Wolff et. al., 2012), neurobehavioral (Chawarska et al., 2013; Shic et al., 2014), and neurophysiological (Elsabbagh et al., 2012) data that subtle abnormalities related to later emerging ASD can be detected as early as 6 months. This suggests a potential sensitive period early in infancy for the development of social cognition that may be highly influenced by social orienting and attention. 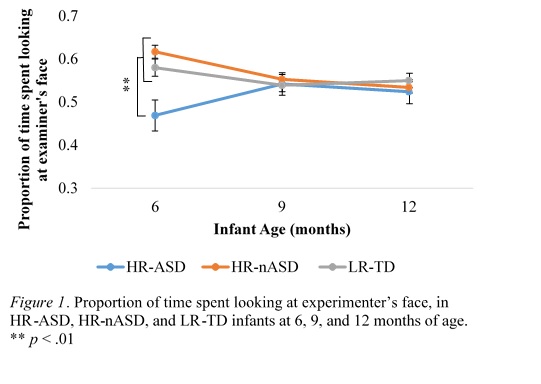