Diffusion MRI (dMRI) is a powerful and noninvasive tool for quantifying the development of brain white matter, potentially playing a critical role in understanding normal brain development and the neuropathology of related brain disorders, such as Autism Spectrum Disorders (ASD). However, the technique is susceptible to head movement as it essentially measures the movement of water molecules in the brain. Although head motion in infants is commonly considered to be more extensive than in adults, patterns of infant head motion, especially in the first six months of life and in dMRI data, have never been systematically characterized.

To systematically characterize head movement in infants from birth to 6 months of age and its impact on dMRI data.

27 typically developing (TD) infants (corrected gestational age: 22-195 days, 7 females) were enrolled in the study. A group of 13 healthy adults (age: 23-42 years, 7 females) were also included as a comparison group. All data were collected on a Siemens 3T Tim Trio scanner with 32-channel head coil and multiband sequences. DTI parameters are: TR/TE of 6200/74ms, a multiband factor of 2 combined with a GRAPPA of 2, FOV of 184×184, spatial resolution of 2mm isotropic, b=0/700 s/mm2, 61 diffusion directions, extra 6 of b0s in both phase encoding directions. FSL and in-house Matlab codes were used to preprocess all MRI data. The output of FSL/mcflirt with 6DOF and mutual information as cost function was used to derive the alignment parameters and motion indices. We also modified a comprehensive measure of head motion, Total Motion Index (TMI), to objectively define signal drop out in developing brains.

Means of the modified TMI, Framewise displacement (FD), and motion RMS were all higher for infants compared to adults (p=0.003, p< 0.001 and p=0.024, two samples T-test). There was an inverse correlation between motion indices and age in infants. Consistent with studies of older populations, fractional anisotropy (FA) decreased with head motion (p=0.011). We tested several postprocessing techniques to minimize the impact of motion on estimating FA and selected ‘eddy’ in FSL (5.0.9) because it assumes no models in recovering signal dropout and rotates diffusion gradient table due to head motion. After motion correction, the slope characterizing the relationship between FA changes and age decreased from 0.87 to 0.84, suggesting that FA in younger infants may be more corrupted by higher levels of head motion.

Head motion in 0- to 6-month-old infants was systematically investigated and characterized. In addition, an improved, comprehensive measure of infant motion that quantifies unbiased signal dropout in diffusion MRI was developed. Given the prevalence of head motion in pediatric and clinical populations, a thorough understanding of the impact of head motion on infant neuroimaging data may serve as a critical step in the use of the tool for identifying the neuropathology of ASD. 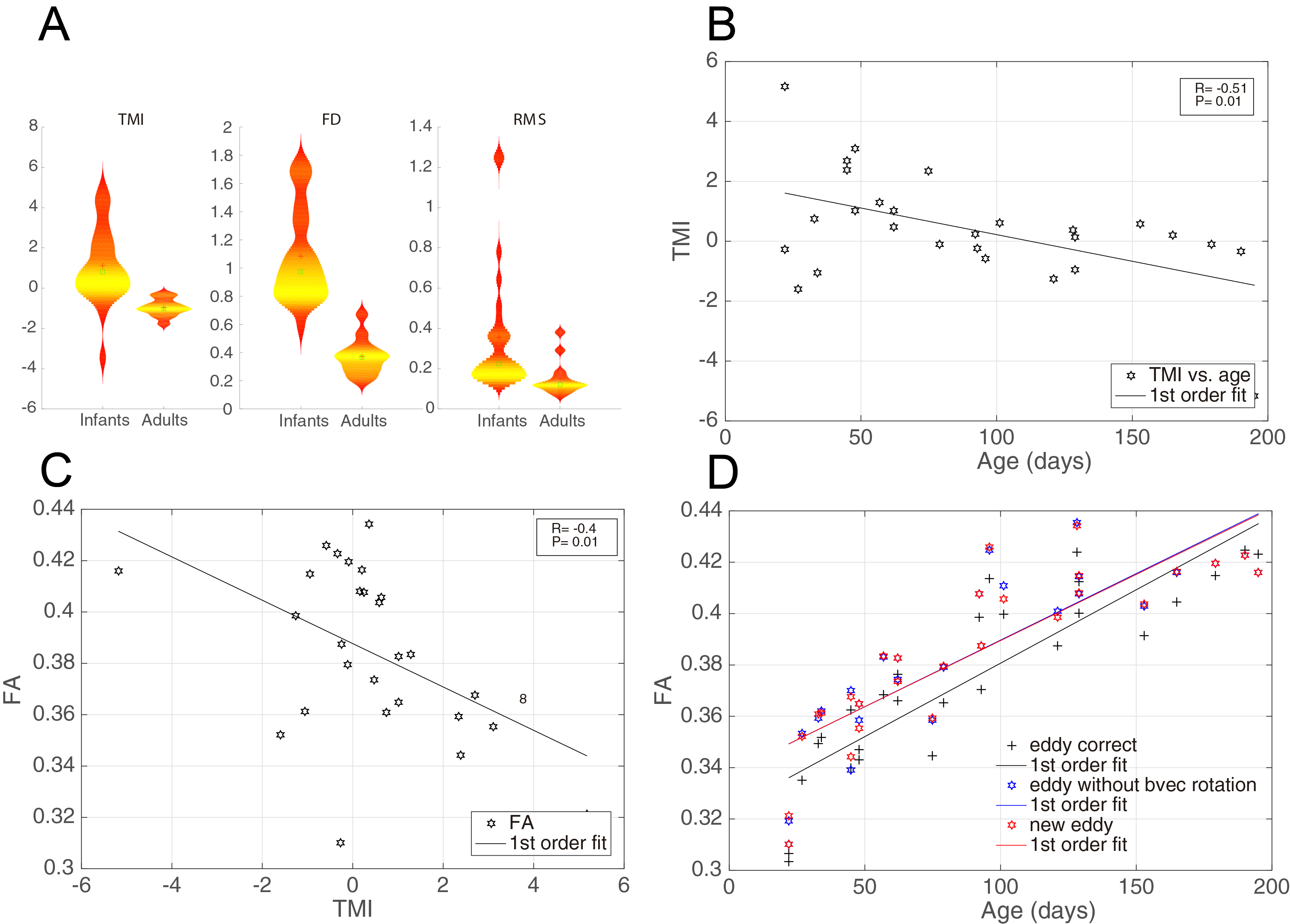