25854
Parent Preparatory Activities As Adolescents with ASD Transition to Adulthood

Extant longitudinal research suggests parental expectations during adolescence are a significant predictor of outcomes in the areas of social participation, employment, and independence for adults with autism spectrum disorder (ASD). Parental expectations around sexuality in ASD populations have also been shown to predict parental actions (i.e., the provision of sex education). Thus, it is hypothesized that parents’ selection of adulthood preparation activities during adolescence may serve as one mechanism through which parent expectations contribute to outcomes for adults with ASD.

1. Examine gender and cognitive level differences in the preparation activities endorsed by parents of youth with ASD.

A national sample of 309 parents of 12–18 year-olds (M=14.4) with ASD (52% male; IQ estimates: 67% average or above, 13% borderline, 21% IQ <70) provided information about youth age, estimated IQ, autism severity (SRS-2), and parental expectations for the future regarding education, financial independence, community roles, and sex/romance (rated 1-5; very unlikely to very likely). Parents also endorsed actions taken to support development in the areas of sexuality/relationships and employment/independence. We grouped similar actions (e.g., enrolled child in a class to build skills, provided education, youth participated in paid or volunteer work) and created binary variables indicating whether any action in the category was endorsed. Chi-square tests and logistic regression were applied to address the objectives.

Because of the balanced inclusion of males and females, this study offers a unique look at gender differences in parent-endorsed preparation activities during adolescence. The finding that males are more likely to engage in activities in the community while females are more likely to participate in formal classes suggests there may be more concern about protection of daughters with ASD. It is noteworthy that parent actions were similar for youth in the two higher cognitive categories considering that prior studies report outcomes are similar across the range of adults with ASD without intellectual disability. Finally, this study provides evidence to support the hypothesis that the actions parents take to support their child’s transition to adulthood are informed by their expectations and may serve as a mechanism through which expectations predict outcomes. 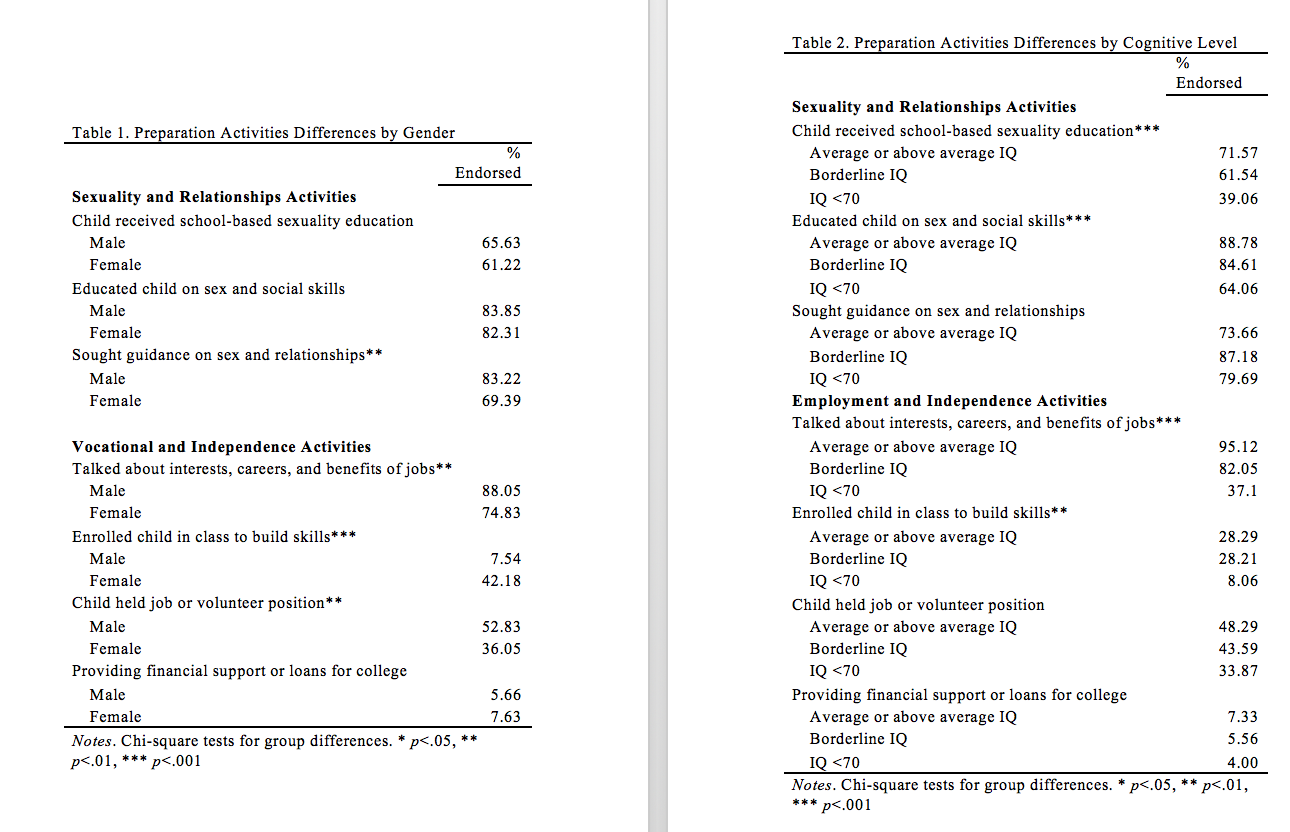