25943
Parental Attributions of Behavior in Toddlers with ASD-Related Concerns

Parental attributions of their children’s behaviors have important implications for parent-child interactions and expectations. For typically developing (TD) children, parents generally attribute good behaviors as internal, stable, and controllable, while misbehaviors are perceived as external, temporary, and uncontrollable (Morrissey-Kane & Prinz, 1999). Conversely, parents of children with autism spectrum disorder (ASD) perceive misbehavior as more internal and controllable than good behavior (Wittingham et al., 2008). However, little is known about the behavioral attributions of parents who have ASD-related concerns about their toddlers. This study compares parental attributions about their toddler’s behavior across three groups: parents with developmental concerns, ASD concerns, or no concerns about their toddler.

The sample comprises 101 parents/toddlers recruited from primary care practices and early intervention programs through a longitudinal community-based study. The groups comprise parents with either self-reported ASD-related concerns, other developmental concerns (e.g., language; motor), or no concerns about their toddler (Table 1). Data collection is ongoing.

Parent’s descriptions and attributions of their toddler’s behavior were collected via the Parental Attributions Questionnaire, which asks parents to describe two scenarios: one in which their child exhibited good behavior and another in which they exhibited misbehavior. In addition, parents rated (on a 5-point Likert scale) the degree to which they view these behaviors as internal, stable, and controllable. Two examiners independently coded parents’ scenario descriptions for content related to social behavior and compliant behavior (see Table 2 for examples of behaviors coded for each scenario type). Interobserver agreement was excellent (Cohen’s ϰ=.814).

Relative to the developmental concerns group, parents of children with ASD-related concerns reported fewer social examples for both the good behavior and misbehavior scenarios. This likely reflects their toddler’s limited socially-directed behavioral repertoire. Additionally, the parents with ASD concerns perceived their toddlers’ good behavior and misbehavior as less under their child’s control, and their misbehavior as a more stable characteristic. These findings have potential implications for parents’ adoption of and adherence to intervention. 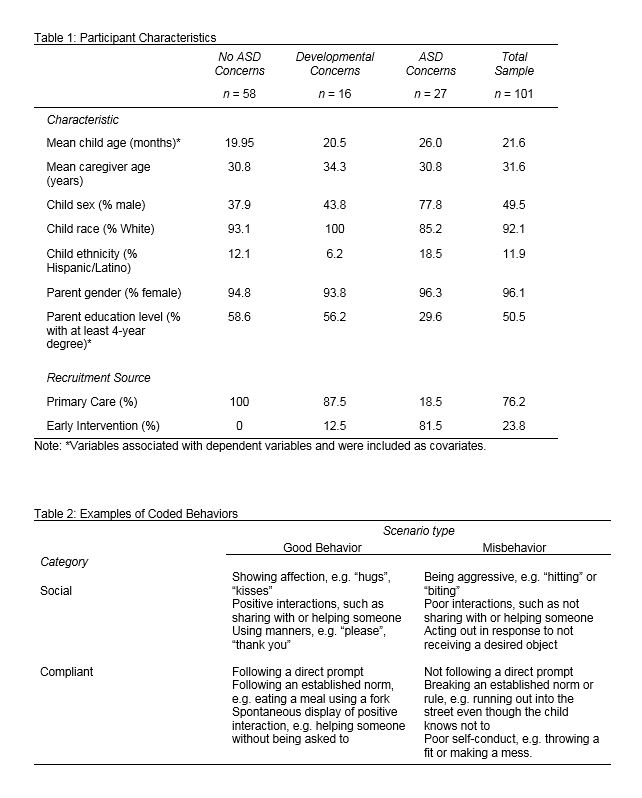