Golden Gate Ballroom (Marriott Marquis Hotel)
R. Burger-Caplan1,2, A. Klin3 and W. Jones4, (1)Marcus Autism Center, Children's Healthcare of Atlanta, Emory University, Atlanta, GA, (2)Psychology, Emory University, Atlanta, GA, (3)Marcus Autism Center, Children's Healthcare of Atlanta & Emory University School of Medicine, Atlanta, GA, (4)Marcus Autism Center, Children's Healthcare of Atlanta and Emory University School of Medicine, Atlanta, GA
Background: Autism Spectrum Disorder (ASD) is one of the most highly heritable of all psychiatric disorders, and presents phenotypically with enormous heterogeneity of social, cognitive, adaptive, and behavioral symptoms and levels of functioning. While ASD likely has a genetic etiology, the state of the field limits the ability to prospectively identify genetic risk for the disorder experienced by a given individual. The current study aims to assess the predictive ability of seven factors of birth and early development that have been suggested across the ASD literature to index risk. To assess these factors, the current study adapts a framework outlined by Kraemer et al (1997), identifying ideal attributes of a risk factor to include (1) measurability—the factor’s ability to be quantified, (2) precedence—the presence of the factor prior to ASD outcome, (3) usability—the ability of the factor to differentiate among diagnostic outcomes, and (4) potency—the extent to which the factor meaningfully predicts outcome. The present study assesses a range of markers, as they each predict outcome at multiple levels of resolution (dichotomized into ASD and non-ASD groups; categorical, including Typically-Developing (TD), Broader Autism Phenotype (BAP), and ASD groups; and dimensionalacross level of social disability).

Objectives: The present study will assess the usability (binary) and potency (continuous) of objective and measurable factors—demonstrating varying levels of precedence—identified as potential markers of infant-experienced risk for the development of autistic social disability.

Results: Multiple of the tested risk factors “failed” the test of usability (Figure 1), not differentiating among diagnostic outcomes (i.e., gestational age and birthweight). Some factors “passed” the test of usability, though demonstrated relatively low potency (Figure 2; i.e., sex and cognitive ability). Sibling Status (presence of an older sibling with ASD), and adaptive ability both demonstrated usability with varying degrees of potency across levels of outcome, though it is of note that Adaptive ability “fails” the test of precedence, emerging alongside symptoms of ASD.

Conclusions: These analyses suggest that there is enormous variability in the degree to which quantifiable factors of infancy and early development are meaningfully predictive of ASD. Further, the current study demonstrates use of a new framework for assessing and understanding such variability, so as to better select and identify risk factors that have predictive utility across multiple levels of diagnostic resolution. While sibling status demonstrates usability and potency across resolutions of diagnostic outcome, 50% of younger siblings of children with ASD go on to develop typically. Thus, there continues to be room for a factor that might index risk experienced by a given child with higher specificity. 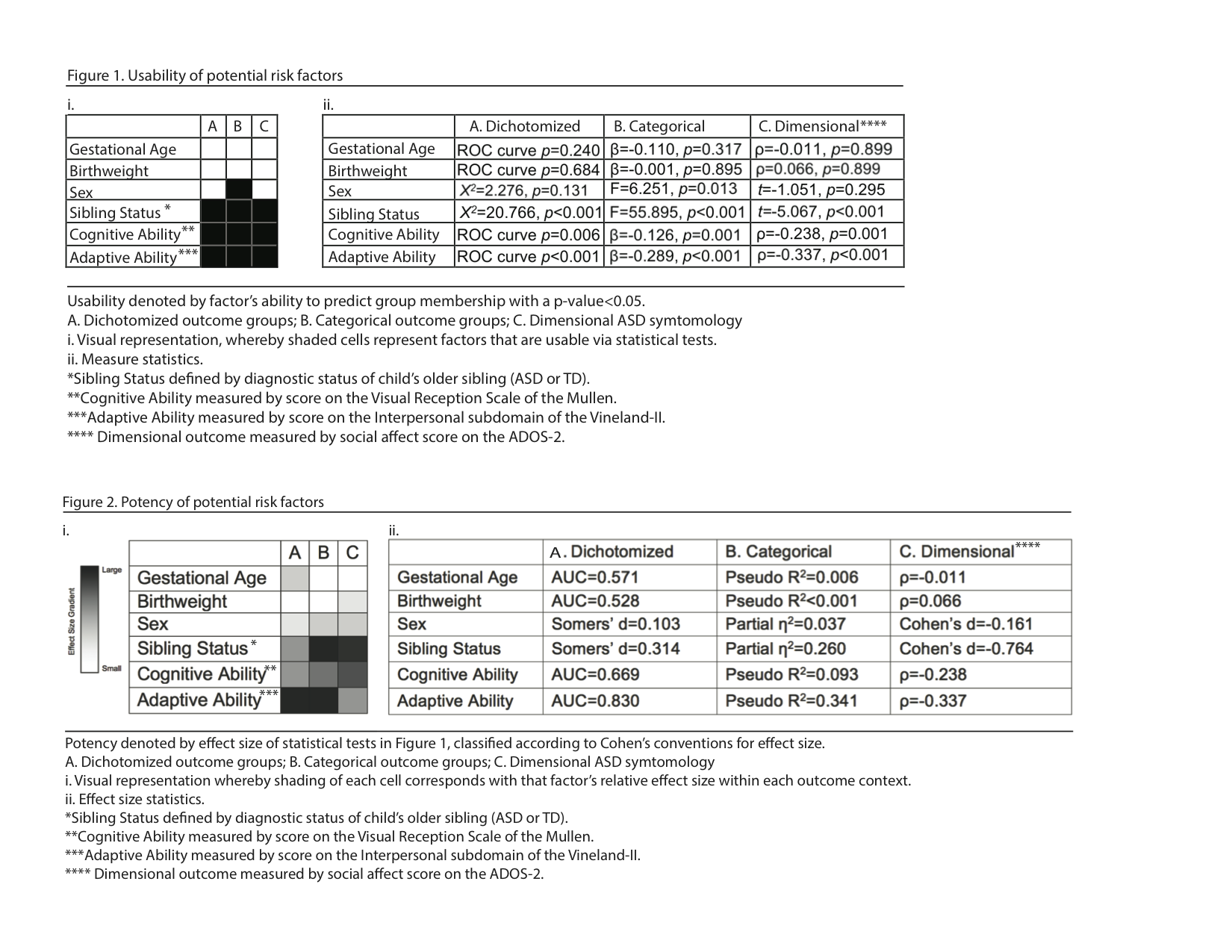