Early identification of autism spectrum disorder (ASD) is crucial for the formulation of intervention programs to be applied at very young ages. There is a strong interest in identifying reliable brain-based predictors, which may constitute useful tools for early detection of at-risk cases. Deficits in language skills may be a hallmark feature of ASD and language delay observed in ASD shows striking similarities to that observed in children with language impairment (LI). Deficits in auditory processing are seen in both LI and ASD, however, auditory processing in the two at-risk populations has never been compared directly using Event-Related Potentials (ERPs) techniques.

At 12 months of age, auditory processing in infants at-risk for ASD (HR-ASD; n = 20), for LI (HR-LI, n = 19) and controls (TD, n = 22) was characterized via EEG/ERP using a passive double-deviant oddball paradigm. Pairs of complex tones were presented at a rapid rate (70ms inter-stimulus interval). For standard tone-pairs (STD), the same tone characterized by a fundamental frequency of 100Hz and a duration of 70ms was repeated twice. Stimuli with the second tone differing in either frequency (300Hz, DEVF) or duration (200ms, DEVD) served as deviants and were presented in a pseudo-random order. Furthermore, all infants were then evaluated at 20 months of age, to prospectively investigate developmental trajectories from early auditory processing to autism-related traits (M-CHAT questionnaire) and language skills (Language Development Survey, LDS).

The results are intriguing and unique as this is the first study that provides abnormalities in ERP auditory processing profiles in ASD compared to LI high-risk infants and controls.

The results reveal that at 12 months of age the two at-risk groups can be compared and differentiated based on their electrophysiological abnormalities in auditory processing, showing distinct predictive value on later socio-communicative and linguistic skills. These results may support the use of objective measurement of auditory processing to delineate specific pathophysiological mechanisms in ASD, as compared to LI. These results can help identifying infants at-risk for ASD and possibly provide specific markers that help to distinguish ASD from more specific linguistic delays. 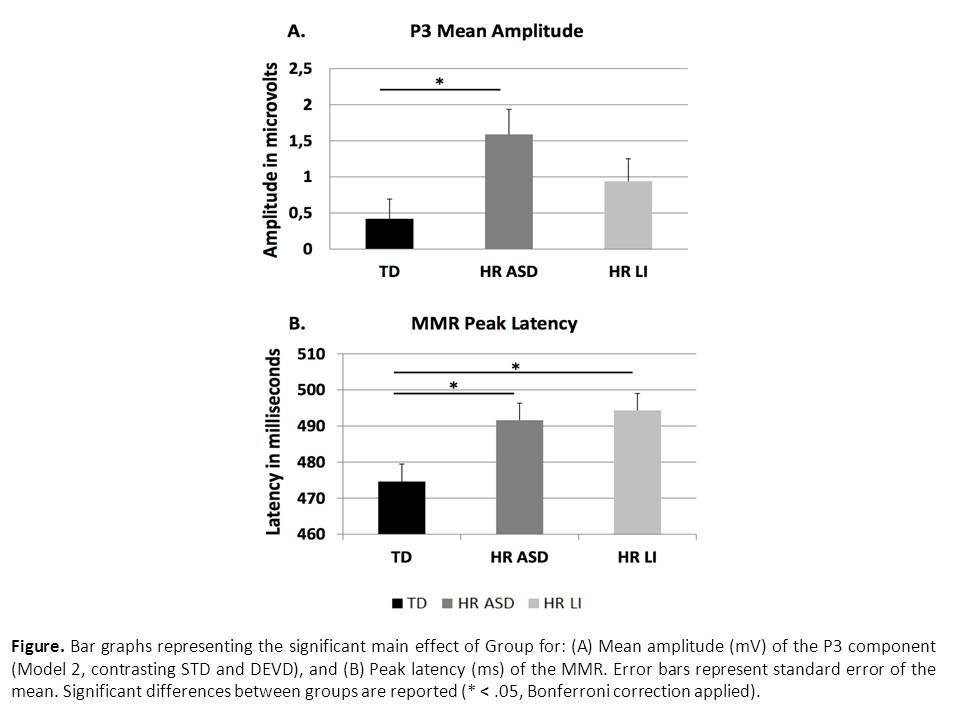