According to the literature, about one fourth of individuals with ASD present with toe walking. In a previous study, we found that this behavior is present not only during walking but also while standing and running, and described three mutually exclusive clinical functional classes with a different degree of severity: TTB during running (TTB1), TTB during walking and running (TTB2) and TTB during standing, walking and running (TTB3). In another study we also found a positive relationship between the presence and severity of TTB and the Achilles’s tendon shortening in ASD subjects. In this perspective, assessing and monitoring TTB in ASD subjects could become critical to identify ASD subjects at risk of developing muscle shortening. Moreover, to our knowledge in the literature systematic observations of the natural history of Tip-toe Behavior (TTB) in ASD children using standardized assessment are lacking.

Objectives: The aim of this prospective cohort study is to describe the natural history of TTB and NO-TTB ASD subjects at short-medium term.

The prospective study included 72 consecutive subjects (62 males; mean age: 15,68 years – SD 3,85) present in our Institute. The inclusion criteria were: an ASD diagnosis according to the DSM V criteria, a diagnosis confirmation based on the ADOS–2. The exclusion criteria were: presence of co-morbid diagnoses that would have an impact on gait. The assessment of presence/absence of TTB during standing, walking and running was done through direct observation and a structured interview of the main caregiver living with the child. We repeated the same evaluation 12 to 44 During months (mean: 29,88 months – SD 8,86; median: 34,5 months) after the first observation.

TTB behavior can change over time in ASD subjects. In an average time of two years about one third of TTB subjects change their severity class and 16% of Non-TTB subjects become TTB. This finding underlies the importance of close monitoring of TTB with standardized protocols. 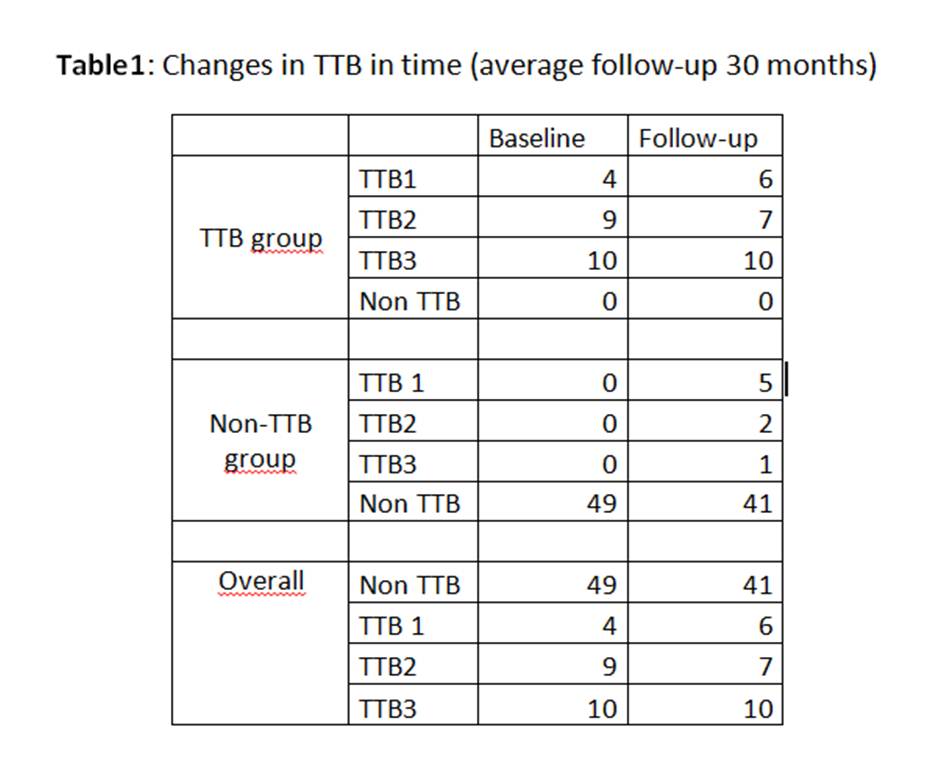